Dempsey: US steps up efforts to help Iraqi army hold on to Beiji refinery 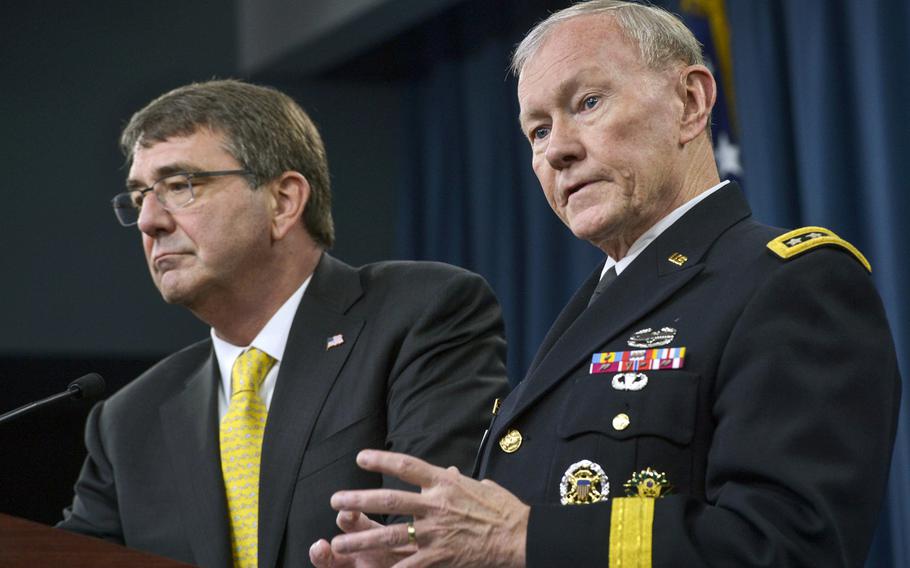 Chairman of the Joint Chiefs of Staff Gen. Martin E. Dempsey answers a reporter's questions as Secretary of Defense Ash Carter listens during a press conference in the Pentagon Briefing Room May 7, 2015. (Glenn Fawcett/Department of Defense)

The U.S. military has stepped up efforts to help Iraqi forces hold on to the strategic Beiji oil refinery after Islamic State fighters gained ground in the area, including the defensive perimeter, the chairman of the Joint Chiefs of Staff said Thursday.

Gen. Martin Dempsey told reporters at the Pentagon that the U.S. has conducted 26 airstrikes in the Beiji area since Tuesday and that a mobile training team at Baghdad International Airport has been working with Iraqi forces to help them rig air drops.

He said Iraqi forces “are under pressure” in Beiji and “have lost some control of the perimeter and some of the road network” leading to the town from Baghdad because the Islamic State has planted so many explosives in the area.

Although the Beiji refinery has not operated in recent months, it's a critical part of Iraq’s oil infrastructure. It also sits along the main route from Baghdad to Mosul, which has been controlled by the Islamic State since last summer’s offensive. Beiji also controls a corridor linking the valleys along the Tigris and Euphrates rivers.

“It is geographically significant as well as significant economically,” Dempsey said. “It’s a very important place.”

Also during the briefing, Defense Secretary Ash Carter said he met with Iraqi Kurdistan Regional President Massoud Barzani and congratulated him on recapturing territory that had been lost to Islamic State fighters. Carter also spoke against calls within Congress to bypass the Iraqi government and provide aid directly to the Kurds and some Sunni tribes.

Those calls have been strongly opposed not only by the Iraqi government but also Shiite militias.

“We oppose such a move, because we believe the unified Iraq is critical to the long-term defeat of ISIL, and because it could put some of our personnel at risk,” Carter said, referring to the Islamic State by one of its several acronyms.

Carter also said Pentagon analysts do not believe claims that the Islamic State directed Sunday’s attack on a contest to draw cartoons of the Muslim Prophet Muhammad. Both gunmen were killed in the attack.

Carter said the attack was “yet another reason why the defeat of ISIL is important” because of “the ability of a movement like this to inspire a certain sort of person.”