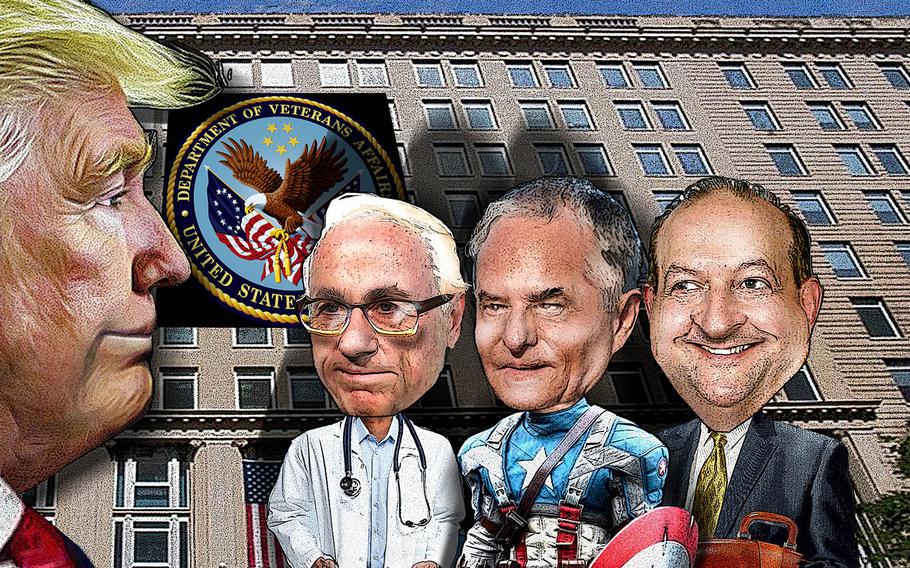 WASHINGTON — A shadowy trio of wealthy members of President Donald Trump’s private club in Palm Beach, Fla., are effectively running the Department of Veterans Affairs in secret, according to a news report published Tuesday.

The trio, dubbed “the Mar-a-Lago Crowd,” comprise an informal council that exerts major influence over the VA and secretly shapes Trump’s veterans policies, reported ProPublica, a nonprofit news organization. They have used their proximity to Trump in ways that could benefit their private interests, according to the report, which was based on hundreds of documents obtained through the Freedom of Information Act.

In response to the news, Democrats on Capitol Hill spoke out Wednesday, including Rep. Tim Walz, D-Minn., the ranking Democrat on the House Committee on Veterans’ Affairs. Walz demanded the VA hand over evidence of communication between agency employees and the three men: Marvel Entertainment Chairman Ike Perlmutter, lawyer Marc Sherman and Bruce Moskowitz, a Palm Beach doctor.

Walz sent a letter to new VA Secretary Robert Wilkie wanting unredacted copies of any correspondence concerning Perlmutter, Sherman and Moskowitz. None of them has ever served in the U.S. military or government, yet they have ordered VA officials to steer policies affecting millions of Americans, ProPublica reported.

The report suggested the three men exert control over the leadership makeup of the VA and had a hand in ousting former VA Secretary David Shulkin after growing frustrated with him earlier this year.

Walz described the situation as an “unprecedented, disturbing, and profoundly unacceptable betrayal of our nation’s veterans.”

“This situation reeks of corruption and cronyism,” Walz said in a statement. “That is why I’m directing my staff to immediately open an investigation into the matter.”

Perlmutter, Sherman and Moskowitz declined to be interviewed for ProPublica’s story. In a statement fielded through a crisis-communications consultant, they downplayed their influence.

In addition to requesting correspondence between the men and current and former VA employees, Walz asked for records of VA employees traveling to Mar-a-Lago, along with the cost of each trip. He wants answers by Aug. 31.

The report also said Moskowitz wanted the VA to develop an app with Apple that would allow veterans to locate nearby medical services. He brought on his son, Aaron, as an adviser.

In his letter, Walz specifically asked to see a copy of an opinion from the VA’s top ethics official either approving or disapproving of Shulkin’s participating in the stock exchange event, and he wants to see records of meetings with Apple Inc., Aaron Moskowitz and VA officials.

The report prompted reactions Wednesday from other Democrats and veterans service organizations.

The American Legion reacted to the report by trying to reassert their position as a mouthpiece for the country’s veterans. They offer advice to Trump that’s “free and untainted by partisan interests,” said Denise Rohan, commander for the American Legion.

“We are not about to tell President Trump who he can or cannot take advice from, but we hope that he carefully considers the qualifications and motivations of those offering that advice when it comes to the treatment and well-being of America’s veterans,” Rohan said.

Rep. Mark Takano, D-Calif., a member of the House Committee on Veterans’ Affairs, called the informal council a “handful of unaccountable rich people with opinions.”

“As he takes on his new role at the helm of the Department of Veterans Affairs, I urge Secretary Wilkie to disregard the input of the ‘Mar-a-Lago Crowd,’ stop the practice of spending taxpayer dollars to ‘kiss the ring’ of dues-paying members of the president’s golf club, and work with those who have an actual understanding of what our veterans need to thrive in civilian life,” Hassan said in a statement.

This spring, Wilkie, a former Pentagon official, served for two months as acting VA secretary. During his first few weeks in the position, he traveled to Mar-a-Lago to meet with the Perlmutter, Sherman and Moskowitz, who approved of him, ProPublica reported.

Melissa Bryant, chief policy officer for Iraq and Afghanistan Veterans of America, said on PBS NewsHour that she hoped Wilkie would be granted the autonomy and authority to “do what’s right for veterans.”

“We would hope that Secretary Wilkie has the latitude to make the right decisions and not to be influenced by money and influencers who may not have the best interests of veterans at heart,” she said.