The centerpiece of the Delta East food cart community in Fussa, Japan, is an empty, shallow pool that kids love to play in. (Aaron Kidd/Stars and Stripes) 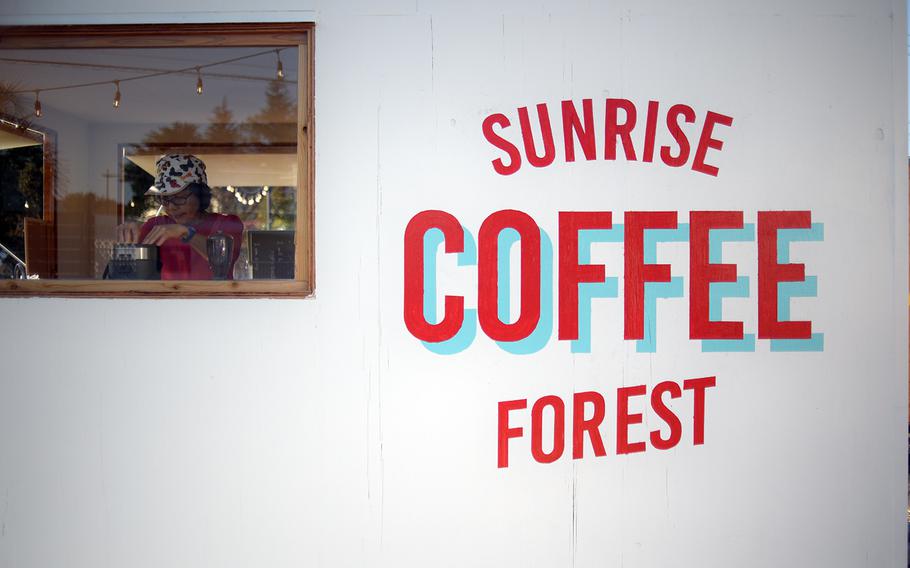 Sunrise Coffee Forest is one of several Portland-style food carts at Delta East in Fussa, Japan. (Aaron Kidd/Stars and Stripes) 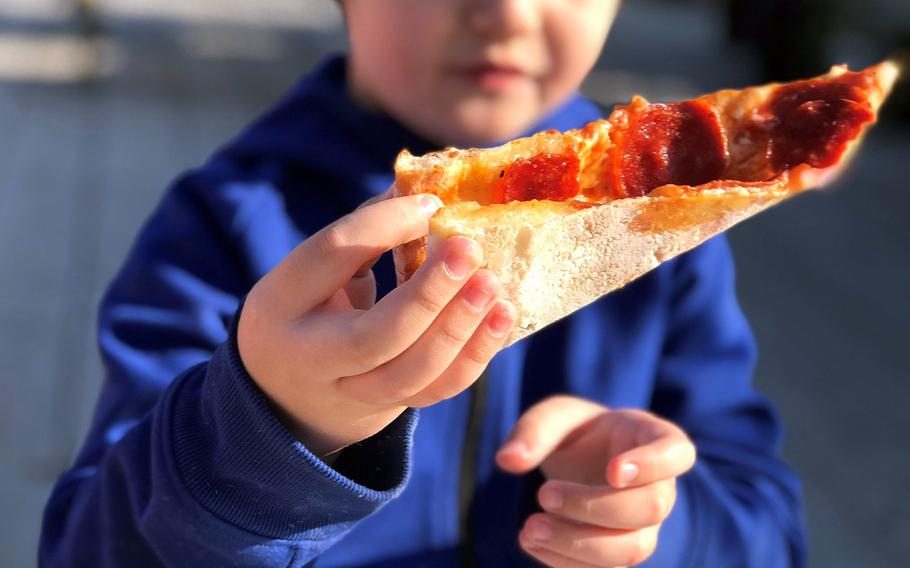 A community of eclectic, Portland, Ore.-inspired food carts recently opened just steps away from the home of U.S. Forces Japan in western Tokyo.

Delta East is the brainchild of Ryuma Sato, vice board member and creative director of Flag, a local nonprofit that aims to inspire and empower up-and-coming entrepreneurs.

These five carts — all under the Flag umbrella but with individual owners — have been serving up solid New York-style pizza, Vietnamese banh mi sandwiches, chicken and rice, craft beer and Ethiopian coffee since Delta East’s debut last month near the westside of Yokota Air Base.

The group is anchored by Dosukoi Pizza, which is operated by Sato and his partner, Shiori, who also serves as a Flag board member. A drawing of a sumo wrestler grappling an enormous pizza slice serves as the shop’s logo. Wrestlers used to shout “Dosukoi!” while shoving an opponent out of the ring.

Sato said he came up with his recipe after spending countless hours studying “Brooklyn-style” pizza, and he’s already received some high praise for his efforts. A customer from Brooklyn stops by for a slice almost every day, and another from Portland told him Delta East has cured her homesickness.

Dosukoi keeps things simple by offering only two flavors: cheese and pepperoni for 500 yen per slice (about $4.60). On a recent visit, the 9-year-old pizza fanatic in my family devoured both flavors and has been begging to return ever since. He enjoyed eating outdoors at one of Delta East’s many picnic tables while bopping his head to Sato’s soothing techno music.

I was impressed with Dosukoi’s quality. The slices are a bit small to be categorized as New York pizza, but Sato makes up for that with a flavorful sauce and crust that’s heads above other area pizzamakers. It’s easily the best pizza I’ve had outside of central Tokyo.

I also tried The Must Chicken, which specializes in “chicken over rice” dishes. I ordered the most popular selection — cheddar and basil — which cost 800 yen for a large portion. I’ll definitely return for more of this hearty, tasty dish.

The Must Chicken offers seven other flavors, including one called “hot death sauce.” They also have an extensive drink menu (300 yen to 480 yen) that has plenty of options for kids and adults.

Delta East’s atmosphere is another draw. It’s hip without being pretentious, and features a shallow, empty pink swimming pool as the centerpiece. My son loved running inside it with other kids. Sato may fill it up with water in warmer months. Or he might stock it with ice and beer. If a skateboarder showed up to ride the empty pool, it would probably make his day.

Sato has high expectations for Delta East. He said there’s space for more food carts, and there’s been a lot of interest from folks who want to join their community. He plans to invite struggling musicians to perform on the grounds and hopes to add a large screen and show movies.

One more thing: Delta East is also home to a kitschy accommodation called The Tiny Motel — not to be confused with a photo studio prop called Chula Vista Motel across the street. Rates vary by season. Those interested should inquire at Dosukoi Pizza, which doubles as the front desk.

Directions: Just north of Higashi-Fussa Station and a short drive from the West and Terminal gates at Yokota Air Base, Japan. Limited parking available.