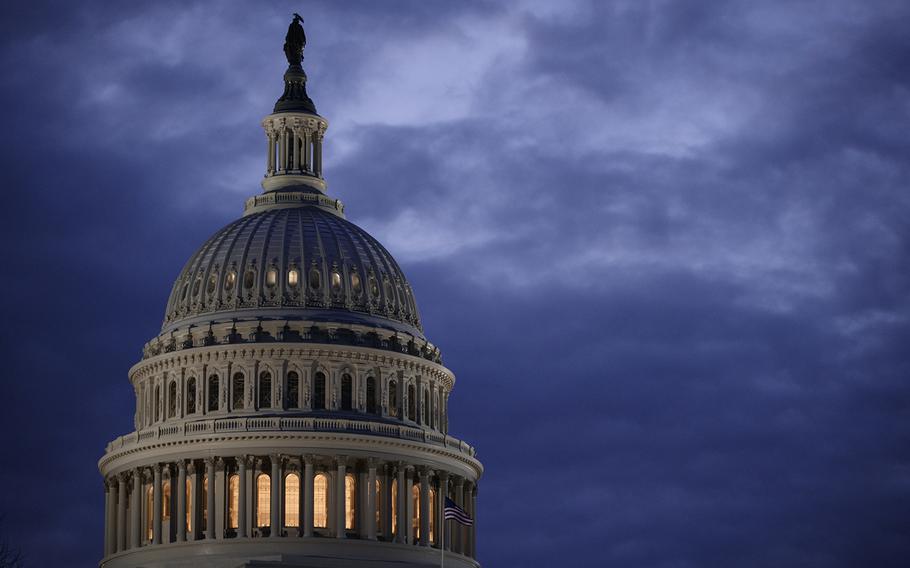 The Capitol Dome is seen at dawn in Washington on March 30, 2017. The Senate has kicked off its annual attempt to pass government funding bills. Success is hardly assured, but President Donald Trump has warned Congress that he will never sign another foot-tall, $1 trillion-plus government-wide spending bill, and he insists that he'll get full funding for his border wall. (J. Scott Applewhite/AP)

WASHINGTON — The House on Wednesday approved a defense spending measure to direct more than $670 billion towards a wave of Defense Department increases, including the largest boost to servicemembers’ pay in nearly a decade and new gains in the number of troops, equipment and weapons for the 2019 fiscal year.

The effort is part of a so-called “minibus” appropriations measure, H.R. 6157, a larger package of more than $850 billion to fund labor, health and human services and education priorities. It also funds priorities directed in the 2019 National Defense Authorization Act.

The measure passed by a vote of 361-61. President Donald Trump must now sign the legislation into law.

“It is vital that we pass this agreement this week and have it signed into law,” said Rep. Kay Granger, R-Texas, chairwoman of the Defense Appropriations Subcommittee. “The men and women of our armed forces deserve no less.”

Trump signed the 2019 NDAA, H.R. 5515, into law Aug. 13, which ushered through a series of new policy reforms, such as revamping the military’s “up or out” promotion system and policies to reign in sexual misconduct and domestic abuse among the ranks. The $716 billion NDAA also authorizes a 2.6 percent pay raise for servicemembers, as well as new purchases of aircrafts, ships, submarines and weapons.

“If you step back and look at the two biggest accomplishments of the Trump administration, signing this bill that we are going to pass today is the most significant step towards rebuilding the military,” Thornberry said.

But several times this year, Trump has threatened a veto of spending measures if Congress doesn’t approve significant funding for a southern border wall, a move that could trigger a government shutdown.

A veto could set into motion a dramatic turn of events. At the end of this week, the House is slated to go into recess until the November midterm elections, Thornberry said.

If the defense spending legislation is signed by Trump by Monday, it would mark the first time in about 10 years that the Defense Department won’t operate under a temporary funding measure, otherwise known as a continuing resolution, for the start of its fiscal year.

The Senate last week approved the compromise legislation in a vote of 93 to 7, sending the measure to the House.

H.R. 6157 also includes a continuing resolution to fund agencies that aren’t covered by the minibus appropriations bill until Dec. 7 to avert a partial government shutdown.

However, lawmakers remain on a tight clock. Without a spending measure in place by Monday, lawmakers might need to pass a continuing resolution, to keep the government operating.