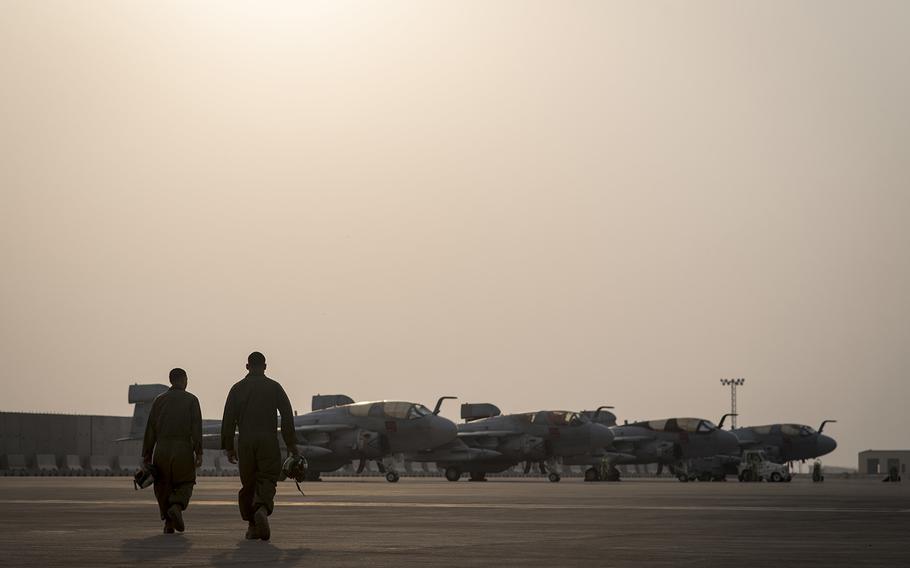 U.S. Marines approach EA-6B Prowlers to conduct maintenance prior to take-off, Oct. 26, 2018, Al Udeid Air Base, Qatar. Servicemembers have just over a month to decide which retirement plan they'd like to use as they themselves fly off into the sunset. (Gracie I. Lee/U.S. Air Force)

WASHINGTON — Eligible servicemembers have just over a month to decide whether they want to opt into a new retirement system or remain in the legacy plan.

Those who joined the military on or before Dec. 31, 2017, are grandfathered in the legacy high-3 retirement system, which requires servicemembers to serve for 20 years before they are eligible for benefits.

If members have served for less than 12 years before Dec. 31, 2017, they can decide to keep their legacy retirement or opt into the new system. These servicemembers have until Dec. 31, 2018, to make their final choice.

Uniformed servicemembers who joined on or after Jan. 1, 2018, have been automatically enrolled in the new retirement plan.

“It is a highly personal choice to opt into BRS, with many factors that can affect a member’s decision,” Jeri Busch, director of the Department of Defense’s Military Compensation Policy, told reporters Wednesday. The new system will allow servicemembers to have government-provided retirement benefits regardless of whether they serve four years or 20 years, she said.

About 300,000 active, Reserve, and National Guard members have chosen BRS, and over 100,000 new servicemembers this year have been automatically enrolled, according to Busch.

“We believe almost half a million members is a remarkable number and demonstrates the willingness of so many thousands of servicemembers to take ownership of their financial future,” she said.

Although the blended system could have savings for the federal government in the long term, said Busch, it was “most specifically designed to be able to provide an early vested, portable” government retirement benefit, especially for younger servicemembers.

The Defense Department does not have a target or quota for BRS membership, she said, but has worked to provide information and resources for everyone eligible.

If there is a last-minute surge of opt-ins before the deadline, Busch is confident that the online systems for the services, including myPay and Marine Online, will be able to handle it, saying they have been “fully tested, including stress-tested.”

From now until the deadline, every eligible servicemember who has not made an opt-in decision will be notified by the Defense Finance and Accounting Services’ SmartDocs system, according to Busch, and remarks will be on Leave and Earning Statements.

Servicemembers can use the BRS comparison calculator to learn more about how the system fits their financial goals.