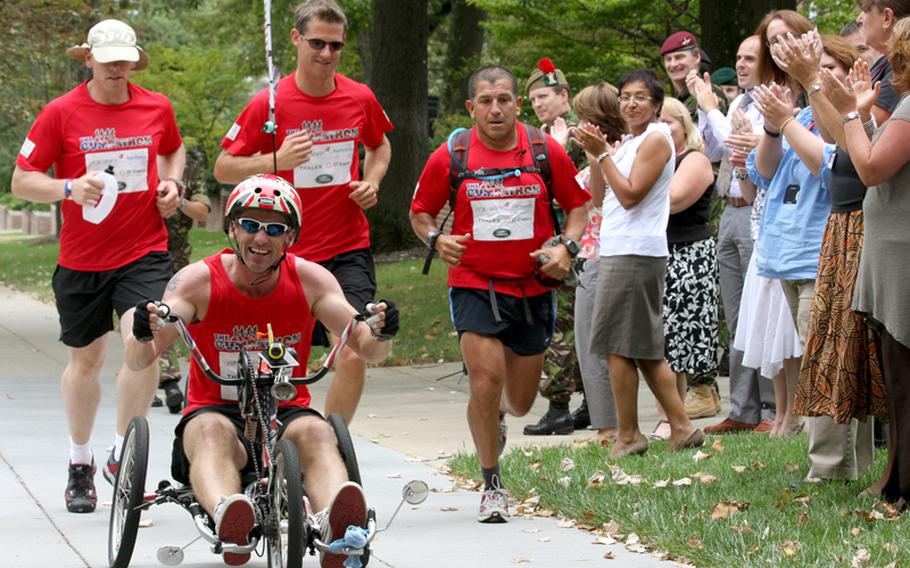 WASHINGTON &mdash; British Marine Mark Ormrod was only 24 years old on Christmas Eve 2007 when he stepped on a landmine in Afghanistan, losing his legs and right arm.

But Ormrod refuses to live the rest of his life as a cripple, and today he is taking part taking part in a 3,530-mile run across the United States to raise money for injured British and American troops. One of Ormrod&rsquo;s friends got the idea to run across the United States from the movie &ldquo;Forrest Gump,&rdquo; hence the event&rsquo;s name, &ldquo;The Gumpathon.&rdquo;

Five British troops and one U.S. Marine left New York on Sept. 10 and are expected to arrive in Santa Monica on Nov. 11. They diverted from their route on Tuesday to stop at the British embassy in Washington for a media event.

All money raised will go to three charities: The Injured Marine Semper Fi Fund in the United States and The Royal Marine Charitable Trust Fund and Help for Heroes in Britain. People can donate by going to The Gumpathon&rsquo;s website.

While the other troops are averaging about 20 miles per day, Ormrod will accompany them for one mile daily, said Claire Worsley, project manager for the event. Because his prosthetic legs have no knees, Ormrod has had to adopt a stiff-legged gait that is much more physically taxing than normal running.

&ldquo;If it was easy, there would be no point doing it, would there?&rdquo; Ormrod said.

That&rsquo;s exactly what one of Ormond&rsquo;s friends found so inspiring about Forrest Gump&rsquo;s run across the United States, leading to The Gumpathon. British Royal Marine Color Sgt. Damian Todd who came up with the idea 14 years ago after watching &ldquo;Forrest Gump,&rdquo; but was ultimately moved to act when Ormrod was injured.

Shortly before the event began, Todd ruptured his Achilles tendon, but he would not let that keep him from making the cross-country trip, so he is making the trek on a hand bike.

A Recon Marine, Padilla also completed the British Royal All-Arms Commando Course while serving on a military exchange in Britain.

He learned about the cross-country run on Facebook, and when Todd asked him to take part, Padilla responded with two words: &ldquo;Hell yeah.&rdquo;

&ldquo;Having a lot of friends that either have been killed or come back with missing limbs, I didn&rsquo;t hesitate at all,&rdquo; he said.

It wasn&rsquo;t long after Ormrod was injured that Todd approached him with the idea of running across the United States. Ormrod initially didn&rsquo;t think he could run at all, but after finding out that other amputees had been able to do so, he committed himself to the physical regimen necessary for the grueling journey.

&ldquo;This for me is a huge goal to set for myself,&rdquo; he said. &ldquo;I got the legs, I knew what I had to do, I learned how to use them [and] I built my fitness back up to get to be where I am now.

&ldquo;Now I just have to get to the other side in one piece.&rdquo;