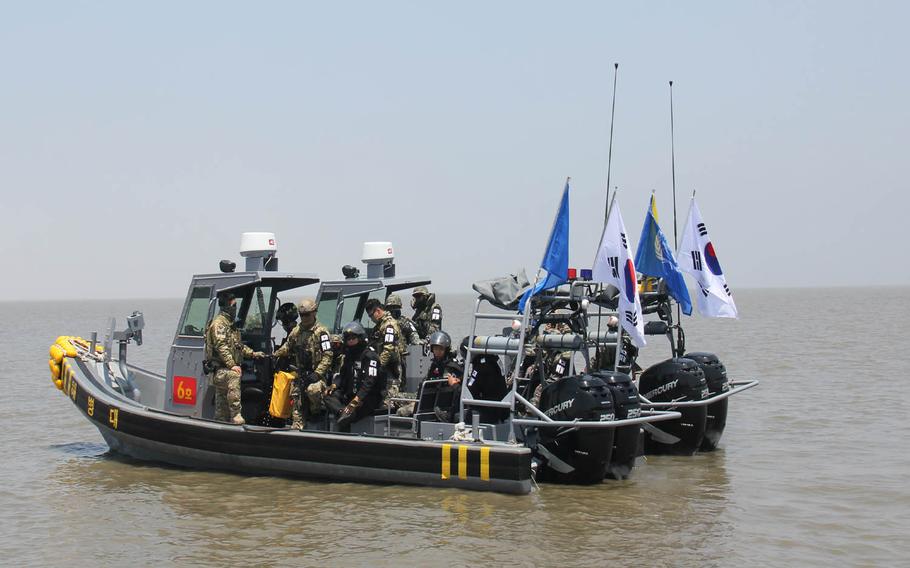 United Nations Command vessels patrol the Han River Estuary, which marks the eastern most portion of the border between North and South Korea, in this undated photo. U.S. and South Korean forces launched a rare operation against illegal fishing Friday, June 10, 2016, amid growing complaints about unauthorized Chinese boats in crab-rich waters near the North Korean border. (Courtesy of UN Command)

The Joint Chiefs of Staff said in a statement that about 10 Chinese boats had sailed to the North Korean-controlled side after the crackdown began Friday, then completely withdrew from the area by noon Monday.

However, the operation, which involved speedboats carrying maritime civil police and bearing the U.N. and South Korean flags, would continue to prevent the Chinese boats from returning to the neutral waters, it added.

It was the first time the South Koreans and U.N. Command have joined forces in an operation in the estuary where the Han River meets the Yellow Sea since the area was designated a buffer zone after the Korean War ended in 1953 with an armistice instead of a peace treaty.

Gen. Vincent Brooks, who leads the U.N. Command and U.S. Forces Korea, authorized the crackdown. South Korean officials and fishermen say the number of illegal Chinese fishing boats has risen sharply in recent years, posing a threat to local livelihoods and the ecosystem.

The issue came to the fore after the local coast guard and a group of vigilante South Korean fishermen captured several Chinese boats earlier this month.

The countries agreed last year to step up joint efforts to counter illegal fishing in South Korea. But South Korea says the number of Chinese fishing boats illegally crossing into South Korean territorial waters rose from two to three cases a year to 120 in 2015 and 520 as of May.

The problem is exacerbated by the sensitive location of the waters, which are teeming with blue crabs and other marine life. South Korean patrol boats are strictly limited in their ability to chase illegal trawlers out of fear of provoking the North. Clashes have broken out in the past.

Washington and Seoul also need China’s help in efforts to rein in North Korea’s nuclear weapons program. Beijing, a traditional ally of the North, signed off on a fresh round of tough U.N. sanctions earlier this year.

North Korea and China were notified ahead of the operation, South Korean officials said.