Council calls on Karzai to sign pact with US soon 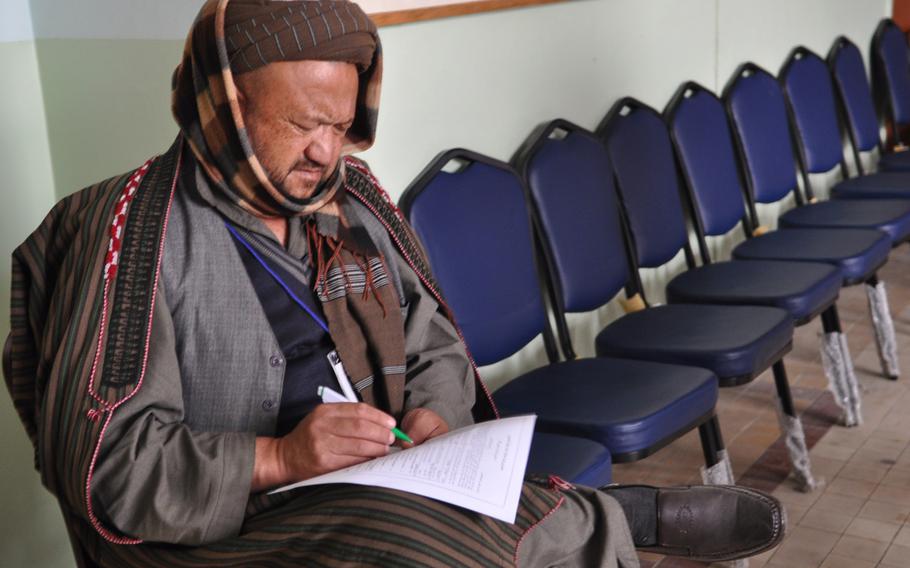 Buy Photo
A member of the Afghan Loya Jirga reads through a proposed security agreement with the United States that would pave the way for international troops to stay in Afghanistan past the end of 2014. The jirga, a gathering of 2,500 community leaders from around the country, was convened by President Hamid Karzai who has said he will respect the council's decision on the security agreement. (Heath Druzin/Stars and Stripes)

KABUL, Afghanistan – Members of the Loya Jirga, or council of elders, are endorsing a U.S.-Afghan security agreement that defines the terms of a continued U.S. troop presence in Afghanistan beyond 2014 and are calling on President Hamid Karzai to sign it soon, rebuffing his suggestion that signature wait until his successor is elected next year.

But on Sunday, Karzai said he wouldn’t immediately sign a security deal with Washington and reiterated that he needed more time.

The 2,500 delegates to the consultative council, called by Karzai to review the bilateral security agreement have been meeting in 50 committees since the Loya Jirga began Thursday. As committee heads announced their findings Sunday, the last day of the Jirga, they endorsed the agreement, though some suggested amendments, including to the article governing jurisdiction over U.S. troops, without which the U.S. would not maintain a presence in Afghanistan. Failure to agree on that issue led the U.S. to withdraw completely from Iraq two years ago.

Most also expressed displeasure with Karzai’s proposal at the start of the conference to delay signing the agreement until after his successor is elected in April -- a timeline rejected by the U.S., and most urged him to sign it soon. One committee head asked for a signature as soon as 15 days after the Jirga, and another called for it to be sent to parliament directly after the Jirga, according to the Jirga’s official Twitter feed. Others asked that it be signed before the end of 2013, as demanded by the United States.

U.S. officials say they need a year to plan for the continued presence of a small number of troops in Afghanistan to train and advise Afghan security forces after all combat forces withdraw by the end of 2014.

State Department spokeswoman Jen Psaki said last week that a delay in signing the agreement was “neither practical nor possible ... because of the uncertainty it would create and because it would make it impossible for the United States and allies to plan for a post-2014 presence.”

The committees’ endorsement of the agreement was not surprising, as there appeared to be broad consensus on support of the agreement by Saturday. However, several committee chairs requested modifications, according to the English-language posts on the official Loya Jirga Twitter account. At least six called for a new U.S. base in Bamiyan province in the country's less violent north.

Multiple chairmen called for amendments to the article in the agreement granting immunity from Afghan prosecution to U.S. soldiers, with one suggesting the U.S. set up courts in Afghanistan so that Afghan victims of American crimes could more easily attend proceedings. Another said the American government should pay for victims to travel to trials overseas.