Could Jordan be at risk from ISIL violence? 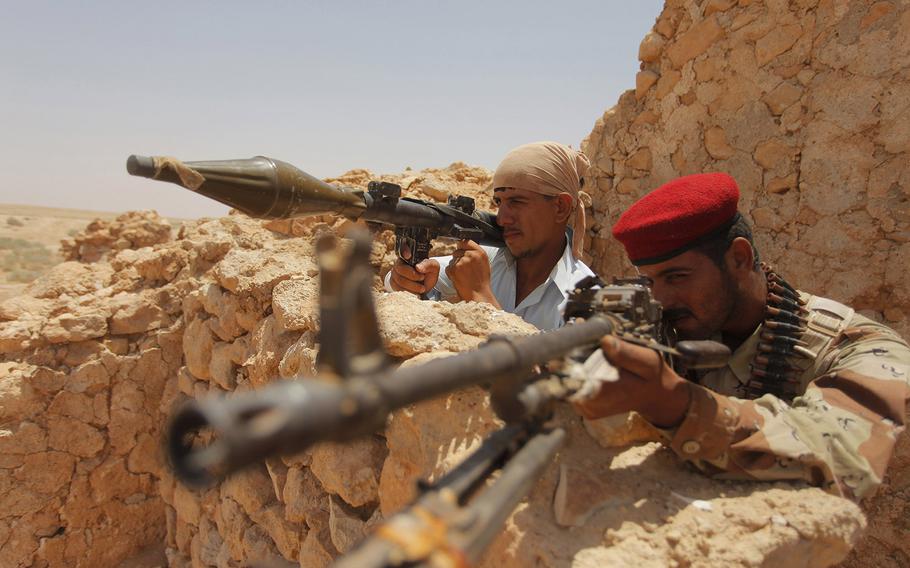 Iraqi Shiite tribal fighters deploy outside the Shiite holy city of Najaf, 100 miles south of Baghdad, Iraq, Sunday, June 22, 2014. Sunni militants on Sunday captured two border crossings, one along the frontier with Jordan and the other with Syria, security and military officials said, as they pressed on with their offensive in one of Iraq's most restive regions. (AP)

The stunning victories in Iraq by the al-Qaida-inspired Islamic State of Iraq and the Levant have brought Islamic extremists to the borders of Jordan, raising fears in Western and Arab capitals that the conflict that exploded in Syria three years ago could engulf one of America’s closest Arab allies.

Like his late father King Hussein, who died in 1999, King Abdullah has managed to navigate through crises that have ringed his country — with Syria to the north, Iraq to the east and Israel and the Palestinian territories to the west. Jordan has remained remarkably resilient for a small, resource-poor country in the middle of the world’s most unstable region.

“Despite these crises ... one of the most consistently fragile entities to emerge from the century-old British-French carve-up of the Middle East has managed to remain remarkably stable and peaceful,” said Ed Blanche, a Beirut-based analyst and a member of London’s International Institute for Security Studies.

Nonetheless, ISIL’s string of victories in Iraq and its growing profile in the Syrian insurgency are cause for concern. The militants have seized vast areas of northern and western Iraq, including the country’s second-largest city Mosul. With Iraq’s demoralized army in disarray and verging on collapse, ISIL’s forces reached the Jordanian frontier, seizing the main border station along the major highway linking the capital Amman and Baghdad.

ISIL’s branch in Syria has been openly threatened to depose King Abdullah and have reportedly tried to smuggle weapons across the northern border to sleeper cells inside the country.

ISIL, whose goal is to form a “caliphate” stretching across much of the Middle East, has posted videos on Youtube and other social media, one of which showed an ISIL fighter tearing up a Jordanian passport and threatening to send a message to the “tyrant” — King Abdullah — with their explosive belts.

“That could spill over into some of our allies like Jordan,” President Barack Obama said Sunday in an interview Sunday on CBS television’s “Face the Nation,” referring to regional turmoil.

On Tuesday, King Abdullah himself told reporters in Berlin that “the crisis ... has shown us that transnational terrorists have no regard for borders.”

Still, regional analysts have played down the likelihood that the militants pose an imminent danger to Jordan, whose security forces and British-modeled military are considered to be among the most effective and best disciplined in the Middle East.

“ISIL advances ... are a potential threat to all countries in the region,” said Rami Khouri, director of the Issam Fares Institute for Public Policy and International Affairs at the American University of Beirut. “There are some small pockets of militants in Jordan, but I don’t see the current situation as a major direct threat to the stability of Jordan.”

Khouri said that in contrast to Syria and Iraq, ISIL extremists just don’t enjoy significant public support in Jordan, and the population would rally around the government in the event of an external threat.

Jordan’s nearly eight million people are a mix of Palestinians and Bedouin-origin Sunni Muslims. Although those two groups have their differences, the country has no large religious minorities that have been at the heart of the instability in Syria and Iraq.

Furthermore, the tactical situation is much different than in Iraq. Militants coming from Iraq would have to cross hundreds of miles of desert where the Jordanian air force and army could easily pick them off in the open.

“Jihadist groups in general have always thought Jordan is a legitimate target, but not an immediate target,” said Dr. Musa Shteiwi, head of the University of Jordan’s Center for Strategic Studies. “Their immediate target now is the Iraqi central government. But if this conflict continues and if ISIL becomes a dominant factor, there is definitely a threat to Jordan.”

Facing the possibility, Jordan’s military has in recent weeks significantly bolstered security along its borders with Syria and Iraq. The 112-mile frontier with Iraq, located about 200 miles east of Amman across a stony desert, was reinforced with armored personnel carriers and other heavy weapons. Jordanian aircraft have attacked truck convoys inside Iraqi territory near the border several times in recent weeks because they were believed to be carrying arms and insurgents.

Jordan also has powerful friends — the United States, Saudi Arabia and Israel — each with strong interest in the survival of the Jordanian monarchy.

The Pentagon has deployed a squadron of F-16s and Patriot air defense missiles to the country. And 12,000 troops from the United States, Europe and the Arab world participated in joint exercises in northern Jordan a few weeks ago.

Despite formidable resources at their disposal, the Jordanians do face potential challenges as long as unrest roils its neighbors.

ISIL is the successor to al-Qaida in Iraq, which fought U.S. forces in Iraq after the 2003 invasion. Its founder, Abu Musab al-Zarqawi, was a Jordanian ex-convict who was responsible for the fatal bombings of Amman hotels in 2005. Al-Zarqawi vowed more attacks before he was killed in 2006 in a U.S. airstrike northeast of Baghdad.

Passions inside the country have been sharpening as the jihadis expand their control in Iraq.

Jordanian security sources estimate there are about 2,500 Jordanian Islamists fighting in Syria and Iraq. About 250 have been killed in action so far.

Jordan’s home-grown Islamists, meanwhile, are centered largely in the troublesome and long-neglected southern city of Maan, where on June 20 they demonstrated in the streets hailing ISIL “victories” in Iraq. Dozens of jihadists killed in Syria are buried in the city, which seethes with anti-government hostility and clashes between security forces and locals.

Security authorities now fear that ISIL is infiltrating sleeper cells in Jordan among the torrent of refugees pouring across the border. As a result, Jordan is asking international donors for $1 billion to use to address increased security concerns due to the presence of at least 600,000 Syrian refugees, about as much as it has asked for education and health services for the refugees.

The global intelligence firm Stratfor said that although ISIL would face severe constraints if it tried to push militarily into Jordan, it has the capability of carrying out more terrorist attacks.

Blanche also warned that although Jordan has been able to weather the regional unrest in recent years, the possibility that ISIL could covertly infiltrate its fighters into the country had to be taken very seriously.

“Given President Obama’s failure to act decisively throughout the jihadist offensive in the region, in which they now control more territory than they have ever done, King Abdullah has every reason to chewing his fingernails to the bone with worry,” Blanche said.