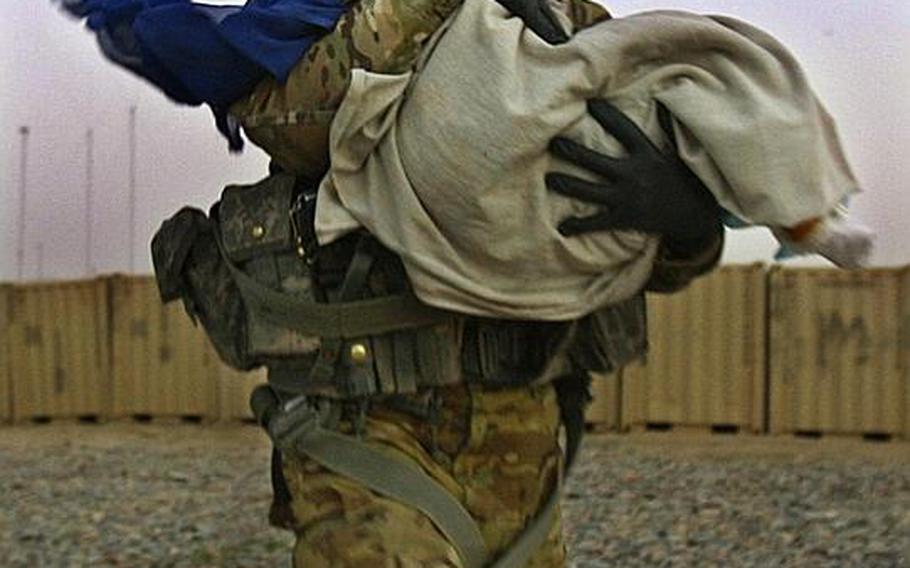 Buy Photo
Flight medic Cpl. Amanda Mosher, of the 563rd Aviation Support Battalion, 159th Combat Aviation Brigade, 101st Airborne Division carries an Afghan baby to a medevac helicopter at Combat Outpost Nalgham on June 15, 2011, in Kandahar province, Afghanistan. The baby had been severely burned by boiling water and was brought to the COP by her father for treatment. (Laura Rauch/Stars and Stripes)

FORWARD OPERATING BASE PASAB, Afghanistan &mdash;The flight rookie kneeled across from her mentor and waited. She knew nothing of the blast that had caused the injuries to the soldier she was about to treat, nor did she know of the firefight that raged nearby. All she knew was that a soldier&rsquo;s legs had been blown off, and that in a few seconds, he would be her patient.

As the crew chief pushed the helicopter door open, debris filled the cabin and the familiar outline of soldiers carrying the wounded appeared from seemingly nowhere in the dust. With a haste that comes only in battle, the wounded soldier was thrust onto the cabin floor between the flight medics.

Though Cpl. Amanda Mosher was new to flying, she was no rookie at medicine, having served a previous tour as a medic in Afghanistan.

First she checked the tourniquets. The left was secure, but the right needed work. She pushed her knee into the groin of the soldier, putting pressure on the artery while she applied a new tourniquet. A secondary assessment found that a hole had been blown in his right arm, leaving the bones in his elbow exposed. His left arm lay dangling. He would lose that, too.

For the next 10 minutes, about the time it took to fly to the trauma facility at Kandahar Air Field, sweat dripped from her flight helmet as she worked to stabilize her patient. She was relieved when the trauma team took over.

The crew had barely finished refueling when they were called for another mission. A Stryker vehicle had been attacked leaving two wounded and one killed.

Mosher had been slated for a week of flying with a Dustoff medevac unit out of Forward Operating Base Pasab to complete her mentorship program and qualify as a flight medic.

She was tasked with treating five Category Alphas, priority patients with life threatening conditions. In the fury of the fighting season in the Arghandab River Valley, it took her just half a day of flying to qualify.

Before the week was finished, she would be nominated for the Combat Medics Badge for taking direct fire and for an Air Medal with Valor for her actions under fire.

&ldquo;She&rsquo;s very cool-headed, no matter what the situation is,&rdquo; said Staff Sgt. Garrick Morgenweck, who served as Mosher&rsquo;s mentor at FOB Pasab. &ldquo;You can tell from the first moment she puts her hands on a patient that she knows what she&rsquo;s doing.&rdquo;

Because the protracted wars in Afghanistan and Iraq have created a shortage of experienced flight medics, Company C, 1st Battalion, 52nd Aviation Regiment has developed a rigorous on-the-job training program to qualify medics to serve in helicopter medevac units in Kandahar province.

Mosher, 22, from Cheyenne, Wyo., is the first graduate of the program.

The two-month course begins with a seven-day training and testing program where the baseline knowledge of the candidate is determined. If they pass the initial evaluation phase, medics begin a stringent month-long training course with the aircraft.

Upon completion, candidates then undertake a field mentorship program where they are required to treat five Category Alpha patients and undergo a final review by Pinnell before being selected.

&ldquo;I can only take the best of the best. They have to be able to operate independently out there,&rdquo; Pinnell said. Because flight medics work by themselves in the back of the helicopter, they are required to have top-notch medical skills and be confident in their ability to work autonomously.

At first glance, Mosher&rsquo;s looks and quiet demeanor can be deceiving. Her lean frame hides the hard-earned strength and fortitude she achieved while growing up on a farm in Wyoming where her family grew wheat.

&ldquo;I&rsquo;m not afraid to sweat or do hard labor,&rdquo; Mosher said, &ldquo;I don&rsquo;t walk away from something if I think it&rsquo;s hard.&rdquo;

Mosher has wanted to be a doctor since she was 5 years old. She was inspired to join the Army by her grandfather, a Pearl Harbor survivor who helped evacuate the wounded in the attack. She currently has plans to attend medical school and practice emergency medicine while continuing to serve in the Army.

Because she&rsquo;s soft-spoken, some of her mentors wondered whether she could take charge of soldiers on the battlefield. Once she began flying, their fears disappeared.

&ldquo;When you first look at her, you think she&rsquo;s a little timid,&rdquo; Pinnell said, &ldquo;but she&rsquo;s a beast in the back of that aircraft.&rdquo;

On Mosher&rsquo;s final day, just hours before she would rotate out of FOB Pasab, the call sounded.

Within minutes, the crew was flying like the devil to Pashmul South, a region they had come to know well. Once again, a soldier had lost his legs in a blast. And once again, they were landing in a firefight. But this time, they became the target.

As the helicopter touched down, Taliban insurgents launched a rocket-propelled grenade, which narrowly missed the aircraft. Small-arms fire erupted as the pilot called the crew back into the helicopter and lifted off. They circled the battlefield, then tried to follow in on a gun run by an Apache attack helicopter, but another RPG was fired and shook the cabin with a loud concussion.

The crew pulled off a second time, giving ground forces and the Apache room to clear the landing zone.

As they came in on a third run, insurgents fired on the rotors, trying to cause a crash. Bullets came at the windows, barely missing the crew chief and spraying metal fragments throughout the cabin. Knowing the situation on the ground was dire, the crew agreed to a fourth attempt.

As the Apache cleared the way, ground forces laid a suppressing fire and the medevac crew finally landed.

As the door to the helicopter was thrown open to retrieve the wounded, Mosher was the first off the aircraft, shedding her rookie status and earning her place among the battle-tested.