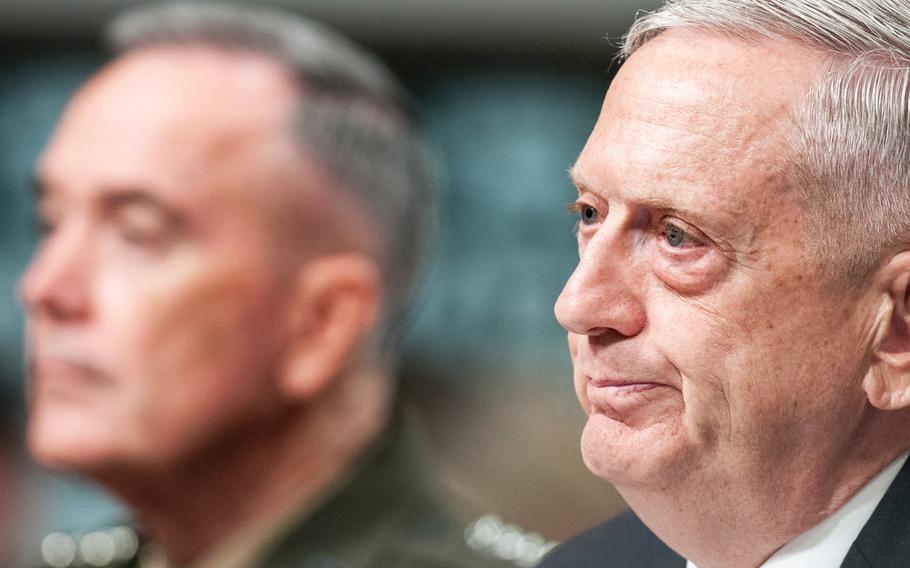 “And get a grip on reality,” Defense Secretary Jim Mattis scolded the Senate Armed Services Committee last June after some senators whined they won’t be able again this year to pass a defense authorization bill on time. “It’s like we’re all walking around as if we’re victims,” said Mattis, not hiding his disgust.

His target, it seemed, were lawmakers who routinely praise the military, habitually lament deteriorating readiness and yet lack the political courage, year after year, to reach a budget compromise with opponents so that the Department of Defense can return to on-time, predictable and less wasteful budget cycles.

The whiny predictions from June came true Sept. 5 when congressional leaders ignored warnings of armed services committee chairmen and cut a deal with President Donald Trump that ensures for a ninth straight year DOD spending will be frozen for at least a quarter of the new fiscal year, starting Oct. 1.

Mattis told senators he was “shocked” by the deterioration in “our readiness to fight” in the four years since he retired as a four-star Marine Corps officer. He said “no enemy in the field has done more to harm” the military than has the Congress in its refusal to end sequestration and restore budget stability.

Sen. John McCain, R-Ariz., chairman of the Senate Armed Services Committee, cited that criticism from June, and separate testimony from the Joint Chiefs of Staff, in opening floor debate Tuesday on the Senate’s version of the 2018 National Defense Authorization Act. McCain underscored that the greatest damage done to U.S. security over recent years has been “self-inflicted” by Congress.

Apart from $60 billion to fund current wars, or “overseas contingency operations,” the Senate bill would authorize a base defense budget of $640 billion. That would exceed the cap set by the BCA by $91 billion, McCain said, triggering sequestration, or automatic across-the-board cuts to all DOD programs, unless Congress intervenes.

Senate passage of the bill at least “will serve as evidence that an overwhelming bipartisan majority of this body agrees the status quo is not sufficient and we need to spend more money on defense to keep our nation safe,” McCain said. “Even so, the unfortunate truth is BCA is the law of the land, and $549 billion is the only defense budget currently legal unless Congress acts.”

McCain blamed accidental deaths of 42 servicemembers in recent months, during ship-at-sea collisions and other routine operations, on Congress allowing an undersized, underfunded and overburdened military to face worldwide threats.

“We are killing more of our people in training than our enemies are in combat,” McCain said. He cited increasingly dire warnings from the Joint Chiefs that years of artificial caps and herky-jerky budget funding have allowed readiness to deteriorate for all but deployed and next-to-deploy forces.

“Every one of our military leaders have said, because of what we’ve done with the so-called sequestration, it has put the lives of our servicemembers at greater risk. Don’t we have an obligation not to do that?” McCain asked.

McCain and Sen. Jack Reed, of Rhode Island, ranking Democrat on the armed services committee, sent a letter two weeks ago to Mattis requesting details on readiness impacts of starting another fiscal year under a continuing resolution, which blocks new programs from starting and freezes spending at previous year levels.

Mattis responded Sept. 8, three days after Trump already had cut a high-profile deal with Democrats and reluctant Republican leaders to raise the debt ceiling and keep the government funded through Dec. 8 under a CR. The same legislation provided billions of dollars in hurricane relief to Texas and Florida.

Ground forces training days will have to be “re-scoped and scaled” to meet essential tasks and requirements. Aircraft flying hours and ship steaming days will be restricted for units not in next-to-deploy rotations. The Air Force said lack of funds during the CR would delay standup of two F-16 fighter training squadrons. The Navy forecast a shortage of maintenance dollars will delay 11 ships returning to the fleet. The Army said the new CR will leave operating accounts $400 million short, forcing it to restrict home-station training and “non-critical” maintenance work orders. Military recruiting and civilian hires also will be crimped until the CR is lifted.

Significant impacts are forecast for military contracts involving weapon buys and services, driving up costs and slowing modernization programs. The Army, for example, said 18 new weapon program starts will be delayed and so will eight production rate increases planned for items like handguns and TOW2 missiles.

Budget instability also could hurt efforts by military associations to derail some cost-savings initiatives embraced by the Senate committee, or urged by the Trump administration, to curb spending on military personnel in 2018 and beyond.

The Senate committee embraced the Trump plan to cap the January 2018 military pay raise at 2.1 percent versus a full 2.4 percent raise to match private-sector wage growth as endorsed in the House-passed version of the bill. Senators also support the administration’s call to remove “grandfathering” protection from last year’s defense bill that protects current retirees from higher Tricare fees.

The Senate bill also endorses the department’s call for higher pharmacy co-pays on Tricare beneficiaries who use mail order or Tricare retail outlets. The administration, however, opposes a Senate bill provision to cut Basic Allowance for Housing (BAH) for many military members married to other members.

For dual-service couples with children, the more senior-ranked member no longer would receive BAH at a higher “with dependents” rate. Both members would get the “without dependents” rate. The administration argues this idea should be tossed as unfairly penalizing “families in which both spouses have chosen to serve their country and, by providing a lesser compensation package than other members of equal grade, send a clear message that their service is not valued as highly.”

McCain announced Wednesday that Democrats and Republicans had agreed on a block of 104 amendments, but couldn’t reach a deal on four others. He shared no further details by our deadline. The Senate was expected to pass its version of the defense authorization within a week. A House-Senate conference committee must iron out any differences before a final bill is passed by both chambers.