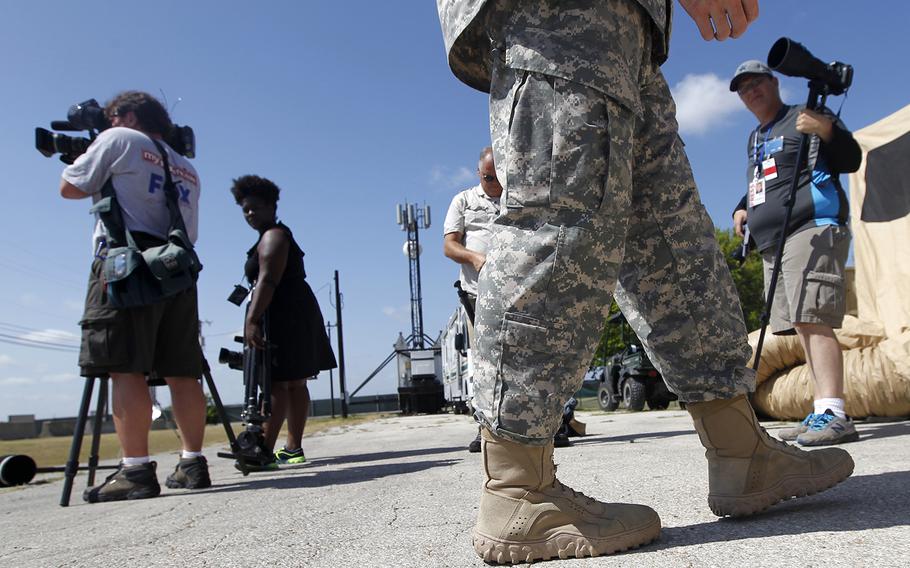 Members of the media wait to be escorted to the Lawrence H. WIlliams Judicial Center for a pretrial hearing, Tuesday, July 9, 2013, in Fort Hood, Texas. (Tony Gutierrez/AP)

In each of his nightmares, the 6-foot-9, 300-pound former Army sergeant fights with the man accused of shooting him and nearly four dozen others in the 2009 Fort Hood massacre.

As the court-martial begins Tuesday and Lunsford takes the witness stand, he’ll have to face the man in person.

Maj. Nidal Hasan is representing himself at trial. There will be no defense lawyer as a buffer between the victims and the defendant. Instead, Hasan will be the one to cross examine the men and women who say they were attacked by him in a shooting spree that turned a base clinic into what one victim called “the worst horror movie you could possibly ever see.”

Lunsford was shot in the face near his left eye and then four more times as he fell to the floor. He testified at the Article 32 hearing that Hasan looked him in the eye as he raised his weapon and fired.

In the courtroom this week when he testifies, Lunsford fears Hasan, an Army psychiatrist, will play mental games with his questions — try to get in his head and use his post-traumatic stress disorder against him. Essentially, try to terrorize him all over again.

Military law experts said keeping Hasan in line while still allowing him to present a vigorous defense will be one of the toughest aspects of what was already a complicated court-martial given the death penalty is on the table.

“It’s a mess,” Victor Hansen, vice president of the National Institute of Military Justice, said. “I would expect the judge will be much more active than she otherwise would be in the case.”

In the military system, it’s rare, even in run of the mill cases, for a defendant to represent himself, and Hensen said there hasn’t been a case of someone representing himself in a death penalty case in the modern era.

The judge, Col. Tara Osborn, will have to “walk a fine line about giving him a little bit of leeway so he doesn’t feel like he’s sat on and can say nothing without letting it turn into a circus where he gets to say whatever he wants,” Hansen said.

Some lawyers who have watched the case closely and many of the victims said they suspect the reason Hasan elected to represent himself is to use the courtroom as his soapbox to espouse radical Islam.

“I’m sure he’ll use every opportunity he can get to spout his views and beliefs. That’s what he’s done so far,” said Shawn Manning, a medically retired Army staff sergeant who was shot six times at Hood that day.

John Galligan, who used to act as civilian counsel for Hasan, said he empathizes with Hasan’s desire to represent himself after having a falling out about his line of defense with his military attorneys, who asked to be taken off the case. The military lawyers didn’t agree that Hasan should present a “defense of others,” in which he would have argued he justifiably attacked the soldiers in an effort to protect the Taliban. The dozens of soldiers shot at Fort Hood were preparing to deploy to Afghanistan.

“I fully understand him thinking, ‘I might as well be by myself if my attorneys don’t support me,’” Galligan said.

Once he decided to represent himself, Hasan asked and was denied by the judge the use of the “defense of others” strategy. Osborne ruled that there wasn’t a proper legal basis for that defense.

Galligan believes the judge made a serious mistake with that decision.

“In the context of a death penalty case, I think it’s reversible error,” he said, meaning it could lead to the conviction being overturned. Hasan “was denied the opportunity to present his best defense.”

After the trial, which is expected to last at least a few weeks, there will likely be years — possibly decades — of appellate review should Hasan be convicted. In the military justice system, there’s automatic review of a conviction.

Because this is a capital case, the appellate courts will give the proceedings heightened scrutiny. During the court-martial, that will present challenges for the judge and the prosecution, who will have to worry about whether Hasan is acting in his best interest.

Usually the prosecutors would be opposing experienced attorneys and could aggressively pursue their case, but “now you have Major Hasan who is not sophisticated in the law,” Hensen said. “Do they have to dial back because the other side of aisle doesn’t have experienced counsel? You don’t want to create an image in the record that [Hasan] was steamrolled and that was why he was convicted.”

Giving Hasan’s lack of expertise, he might not object or make motions when he should, so the judge will have to decide if she intervenes on his behalf, Hensen said.

Also, given the appellate review, the judge will have the challenge of timing in terms of when she cuts Hasan off should he stray from relevant topics. For example, if he tries to make an opening statement that’s inflammatory and irrelevant to the facts at hand and the judge sustains an objection, there will be a question of whether she got it right in not allowing Hasan to continue.

Hensen said he believes she will probably err on the side of letting him talk a little longer so the appellate court has a sense of where Hasan was heading and can then more easily determine whether the judge made the right call.

For Manning, being in the same room with Hasan is discomforting.

“There’s been a lot of anger and frustration built up over last few years,” he said. “Listening to him even speak is going to be difficult.”

He and Lunsford will have their wives in the courtroom for support.

Lunsford said he expects that after facing Hasan he’ll have to get additional mental health counseling. To help him keep his composure, before he gets on the stand, he said he’ll recite “Invictus” to himself, the poem that has helped him in his darkest days of PTSD. It reads in part:

In the fell clutch of circumstance I have not winced nor cried aloud. Under the bludgeonings of chance My head is bloody, but unbowed.