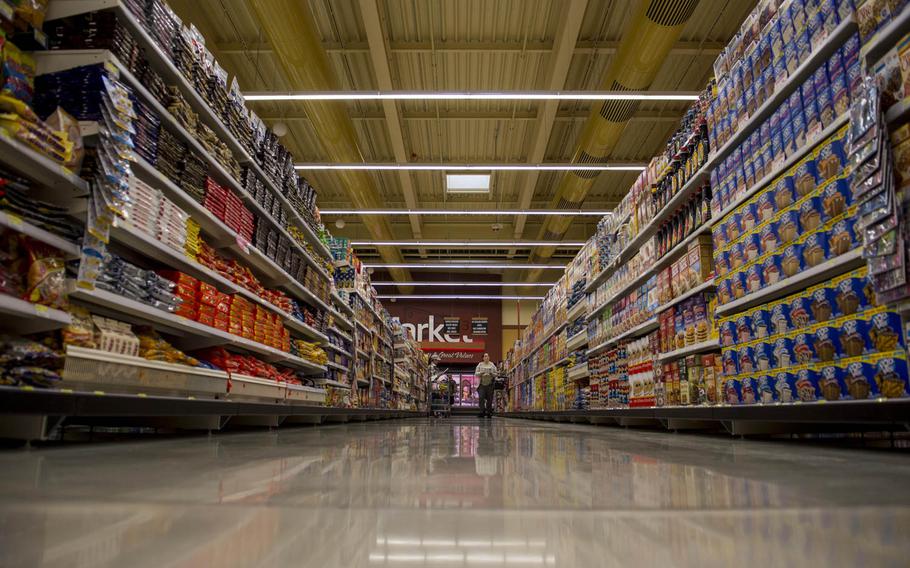 A customer walks down an aisle inside the new Spangdahlem commissary during the grand opening of the facility on Thursday, May 19, 2016, at Spangdahlem Air Base, Germany. Construction for the 54,000-square-foot facility started in February 2014 and was completed in February 2016. (Rusty Frank/U.S. Air Force)

A customer walks down an aisle inside the new Spangdahlem commissary during the grand opening of the facility on Thursday, May 19, 2016, at Spangdahlem Air Base, Germany. Construction for the 54,000-square-foot facility started in February 2014 and was completed in February 2016. (Rusty Frank/U.S. Air Force) 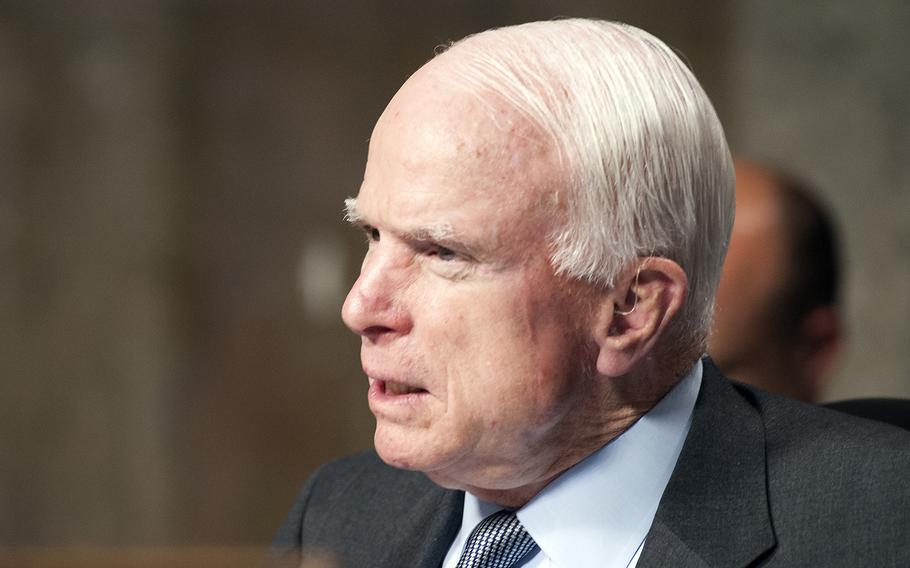 Military associations and the resale industry that supplies groceries to base commissaries are sounding alarms over a provision in the Senate’s fiscal 2017 defense authorization bill that would direct the Department of Defense to privatize up to five of its 240 base grocery stores for two years to assess if a commercial grocer can run all the entire system.

Sen. John McCain, R-Ariz., chairman of the Senate Armed Services Committee, is behind the initiative. After years of debate, he wants to learn whether a supermarket chain can operate base grocery stores so efficiently as to generate profits and still deliver robust savings to shoppers, saving taxpayers more than $1 billion annually, a committee source explained.

McCain reportedly is encouraged by conversations DOD officials have had with major grocery store chains that now believe privatization is feasible beyond “cherry picking” only the busiest stateside commissaries. One or more of these retailers are said to be interested in testing if they can provide the military with a full spectrum of its grocery needs, including operating stores overseas and at remote stateside locations.

The Senate committee’s defense bill (S. 2943) would require that, within 180 days of enactment, DOD begin a privatization pilot at not more than five commissaries to assess “the feasibility and advisability” of privatizing the entire system.

Associations representing millions of commissary shoppers have joined with manufacturers and suppliers of store goods to try to stop the pilot. Their vehicle is a floor amendment from Sens. Jim Inhofe, R-Okla., and Barbara Mikulski, D-Md., backed by 29 colleagues, that would delay any test until the U.S. Comptroller General delivers a report on privatization, which Congress ordered last year, and until lawmakers and DOD officials have time to study its findings. The report is expected within weeks.

McCain, however, believes that only by privatizing some stores can the concept be truly proven or disproved.

“There’s a sense that we’re never going to know the answer to this unless we try it,” said a committee source, explaining McCain’s impatience with waiting for the comptroller report.

Inhofe and Mikulski will argue for a delay during full Senate consideration of the bill when Congress returns from its Memorial Day recess. They are backed by the 40-organization coalition of military associations and veteran groups organized by the American Logistics Association, which represents manufacturers, vendors and distributors of commissary products.

Defenders of the shopping benefit succeeded in defeating the Senate committee’s call last year for DOD to plan for privatization. This year both the House-passed defense bill and the Senate committee’s own bill endorse sweeping new authorities for the Defense Commissary Agency (DeCA) to modernize store operations, including by moving to variable pricing and by offering patrons, for the first time, DeCA-labeled brands.

The theory inspiring these reforms is that the commissary system, without the help of commercial retailers, can reduce the $1.3 billion annual subsidy while preserving patron savings, estimated by DeCA to average 30 percent off commercial prices. A consulting group that studied commissaries used a smaller sample of goods to make price comparisons but estimated savings at only 17 percent.

Inhofe and Mikulski will argue that it makes no sense to launch these reforms while also voting to test privatization and without benefit of knowing what analysts for the U.S. Comptroller General conclude in their report.

A coalition “white paper” also notes that DOD officials previously concluded no commercial grocers were interested in privatization, given the number of commissaries that small, remote or based overseas, which would be a drain on any potential profits. Another consideration is the impact on families if a commercial grocery does not offer the same jobs or provide the wages and benefits as DeCA offers its 15,000 employees. About 65 percent of those workers are military family members, retirees or veterans.

On May 27, in a move long planned and unrelated to the Senate committee’s call to test privatization, the Defense Department published a Request for Information (RFI) from commercial grocers interested in such a test. By July 15, they are to provide answers to questions including: their ability to perform all DeCA tasks; what other businesses they might need to partner with; how they would operate in a military environment; whether they would require a government subsidy; percentage savings they would offer shoppers, and innovative approaches they might take to deliver the benefit such as smaller storefronts, online shopping or door-to-door delivery.

An RFI background document said the goals of privatizing “any or all of the store system are to maintain patron savings and service at a level consistent with an approved baseline, and to simultaneously drawdown the Department’s performance of this non-traditional (i.e., non-military) mission and the fiscal burden on the taxpayer.”

The same document provides perhaps the most accurate snapshot yet on the population of commissary shoppers, using data collected since January 2014 when all stores began electronic scanning on patron ID cards. It says 50.4 percent of store transactions are by active members and families, 38.8 percent by retirees and families and 4.2 percent by reservists, Guard members and their families. The other 6.7 percent are severely disabled veterans, eligible civilian employees and contractors. Almost 37 percent of shoppers are affiliated with Army, 33 percent Air Force, 20 percent Navy, 7.3 percent Marine Corps and 1 percent smaller uniformed services.

Enlisted in pay grades E-4 to E-6 and their families account for almost 39 percent of commissary transactions, representing the largest group of shoppers. Grades E-7 through E-9 and families are 26.5 percent of patrons.