Combat roles for women will strengthen the military, leaders say 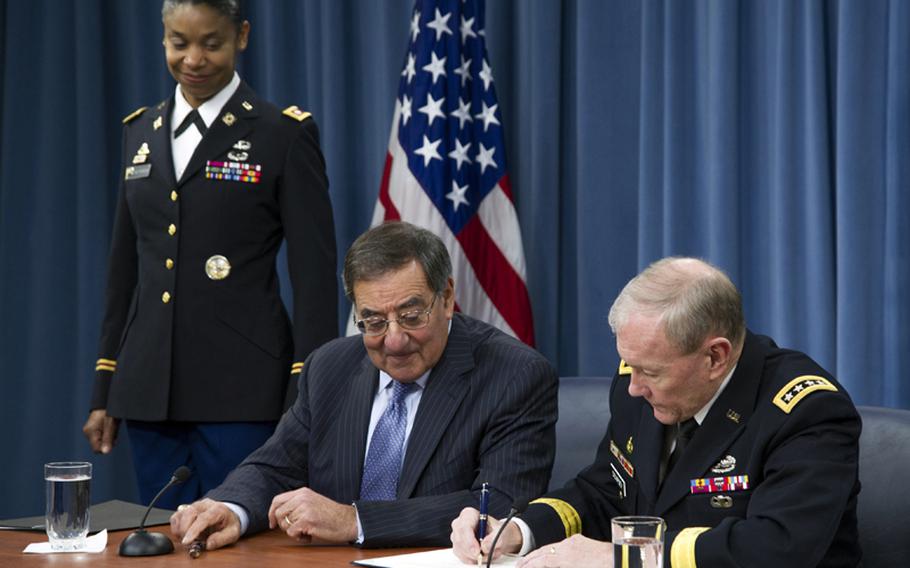 Secretary of Defense Leon Panetta and Chairman of the Joint Chiefs of Staff Gen. Martin Dempsey sign a memorandum for a women in service review during a press conference with media at the Pentagon in Washington, D.C., on Jan. 24, 2013. The memorandum rescinds the 1994 Direct Ground Combat Definition and Assignment Rule excluding women from assignment to units and positions whose primary mission is to engage in direct combat on the ground. (Bradley C. Church/DOD)

WASHINGTON – As some soldiers and Marines question whether women can meet gender-neutral physical standards and perform alongside men in combat roles, service leaders stress that women have already proven themselves on the battlefield and say removing the combat exclusion policy will strengthen, not weaken, the military.

“This is a great opportunity to make our Army better,” said Lt. Gen. Howard Bromberg, the Army’s deputy chief of staff.

Last year, the Army opened six military occupational specialties to women and allowed women to be assigned to battalion-level units in nine brigade combat teams. So far, 113 women have been selected for the new specialties and will begin training this year.

Bromberg and Gen. Robert Cone, commander of the Army’s Training and Doctrine Command, said they have heard positive feedback from male and female soldiers about the changes.

“The concern I get when I talk to soldiers is really about lowering standards, saying we have people on our team who can’t carry their share of the weight,” Cone said, adding that he believes the Army can overcome those concerns with rigorous but fair gender-neutral standards.

“This is a values-based organization that is in support of the American people, so the idea that someone says, ‘I don’t want them here, I don’t like them,’ is not going to carry a lot of weight as we look at reasons,” Cone said.

Sergeant Major of the Marine Corps Michael Barrett is also reassuring Marines that the Corps will not lower its standards, in a video posted on the Marine Corps’ YouTube page.

Rescinding the combat exclusion policy “will not impair readiness, degrade combat effectiveness or cohesion,” Barrett said. “You are responsible for looking out for the Marine on your left and on your right, regardless of gender.”

The Marine Corps has the lowest percentage of women of the armed forces – about 13,800 women, or about 7 percent. Last year, the service opened thousands of new assignments to women, and began allowing women to volunteer to attend its challenging Infantry Officer Course in order to gather data about their performance. The first two women to enter the course both washed out. So far, two more women have volunteered for the 10-week course that begins in March.

The Navy also has made moves toward including more women in roles that were previously closed to them, including jobs on submarines. Three years ago, the Navy announced it would allow women to serve on guided-missile attack and ballistic missile submarines, and now women will be able to serve on Virginia class, or fast-attack, submarines, according to Secretary of the Navy Ray Mabus.

Rear Admiral Anthony Kurta, director of military personnel, plans and policy, said the Navy sees the removal of the combat exclusion policy of a continuation of the service’s efforts over the last 20 years to integrate women into more roles.

About 88 percent of the Navy’s positions are open to both genders, Kurta said. The closed positions include about 19,000 on various classes of ships and submarines, 5,000 that are attached to Marine Corps ground combat units, 3,000 in special operations, 400 in the coastal riverine force and about 1,000 officer positions on nuclear submarines.

“We know that our sailors today understand and see their counterparts as equal members of the team because they’ve been serving side by side just about everywhere in the Navy,” Kurta said.

The Navy has added women to ships or units that were previously limited to men by first adding officers and senior enlisted leaders, then junior enlisted women. The Army is likely to use that model when opening some units to women – adding a group of leaders first, rather than just one lone woman or a junior soldier with no female leaders or role models.

Rich Bennett, a former infantryman with the Army’s 101st Airborne, said he had never imagined serving with women in the infantry until the decision was announced.

“On my base in Afghanistan, there were no women at all,” he told Stars and Stripes, noting that the attitudes of many infantrymen and women will have to change and adapt for it to work. But, he said, “It’s simply the right thing to do.”

“If a woman can execute the job, then they should be able to do the job. If I was laying on the mountain bleeding out, I don’t care who comes to save my life, as long as they are wearing an American flag on their shoulder and they can carry me to safety,” said Bennett, who earned a Silver Star in Afghanistan. “Are there challenges? Absolutely. But the Army is going to have to find ways to make it possible.”

Zoe Bedell, a captain in the Marine Corps Reserve who served two tours in Afghanistan as an active-duty Marine, said the change will mean commanders can now put their Marines where they want or need them, without worrying about gender.

“Now you can just train people based on the mission and their job,” she said. “I think this will strengthen the military.”

About 75 percent of the Army is open to both genders. About 99 percent of Air Force positions are already open to women.

“Women in the Air Force have been serving in combat positions for the past 20 years,” and the roles still closed to women are mainly special operations, said Maj. Joel Harper, an Air Force spokesman. “The Air Force will partner with (U.S. Special Operations Command) and our sister services to proceed to review opening these positions in a deliberate, measured, responsible way.”

The services have until May 15 to submit detailed plans for how they will open combat roles to women, and officials said it’s likely that the integration will be incremental.

“Not every woman wants to do this,” Cone said, “but there are women that want to do this, and I think they should have the chance.”