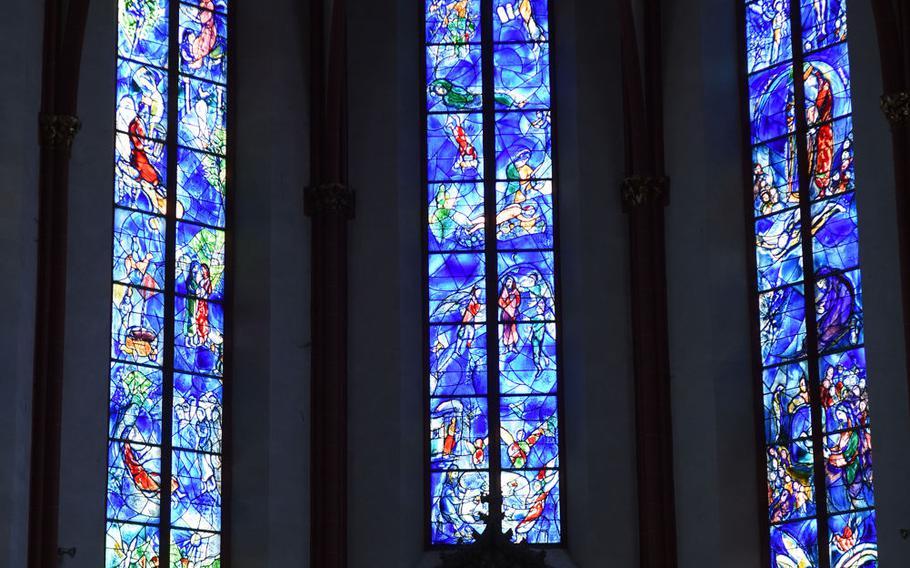 Buy Photo
Colorful stained-glass windows designed by the renowned 20th-century artist Marc Chagall brighten the interior of St. Stephan's, a Roman Catholic church in Mainz, Germany. The church is the only place in Germany to display original Chagall glasswork, a medium he began working in later in life. (Jennifer H. Svan/Stars and Stripes)

Buy Photo
Colorful stained-glass windows designed by the renowned 20th-century artist Marc Chagall brighten the interior of St. Stephan's, a Roman Catholic church in Mainz, Germany. The church is the only place in Germany to display original Chagall glasswork, a medium he began working in later in life. (Jennifer H. Svan/Stars and Stripes) 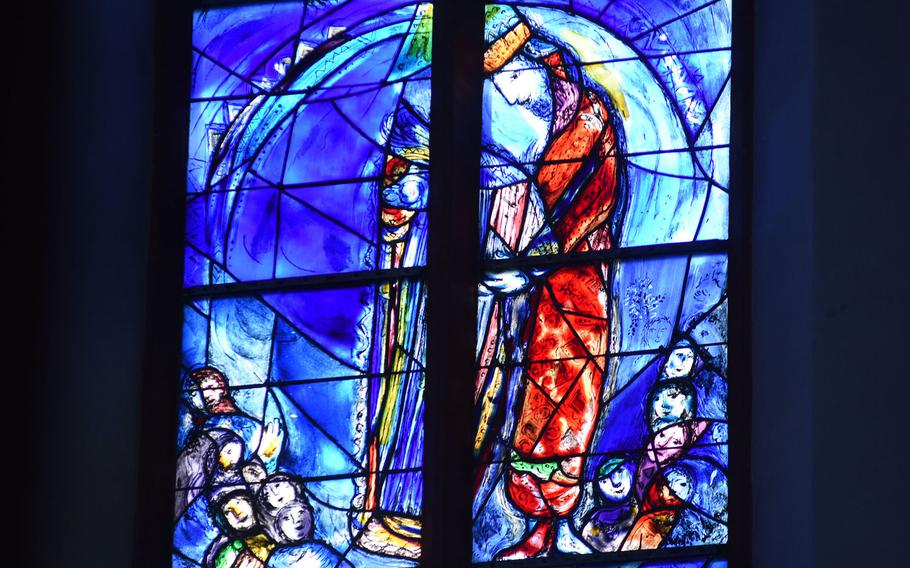 Buy Photo
David playing the harp is depicted in one of the brightly-hued Marc Chagall stained-glass windows at St. Stephan's church in Mainz, Germany. (Jennifer H. Svan/Stars and Stripes) 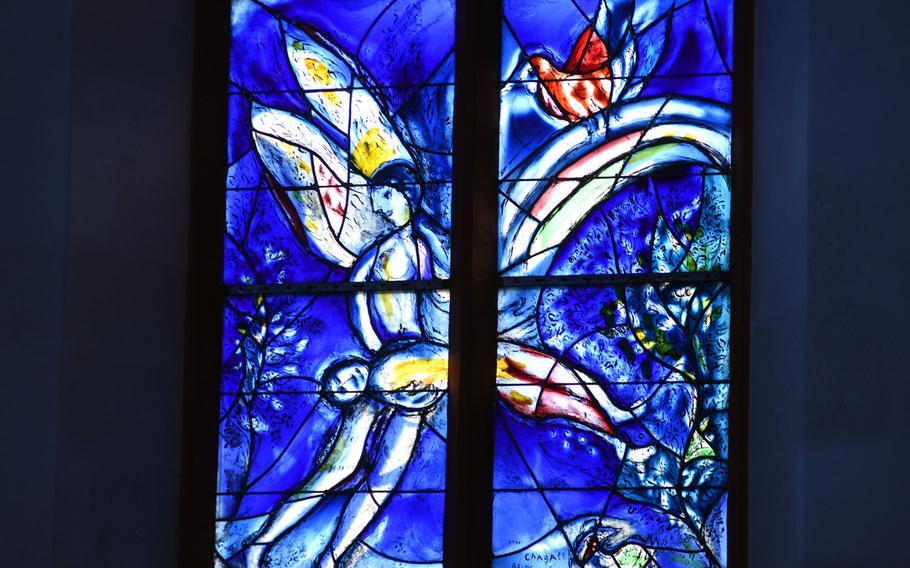 Buy Photo
This scene in one of the Marc Chagall stained-glass windows at St. Stephan's church in Mainz, Germany, is part of the motif titled "Creation." (Jennifer H. Svan/Stars and Stripes) 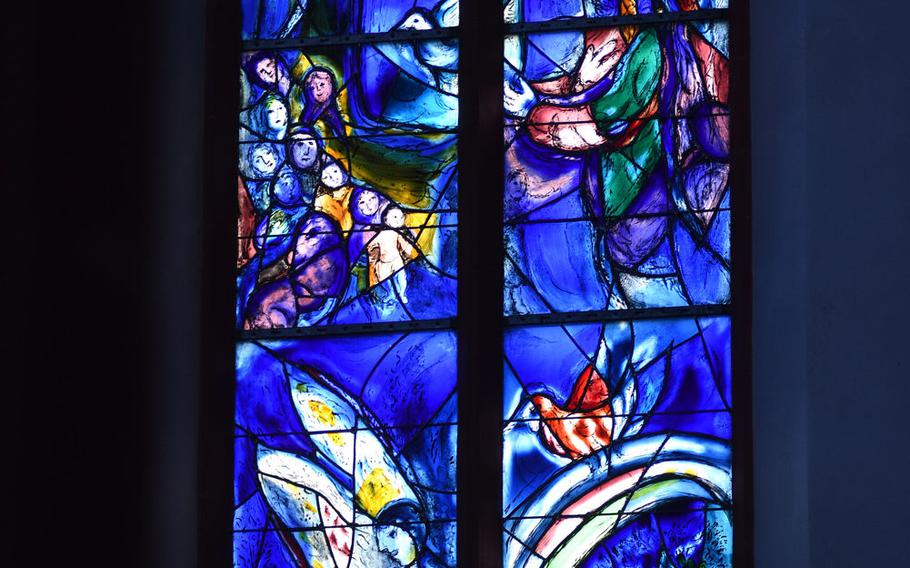 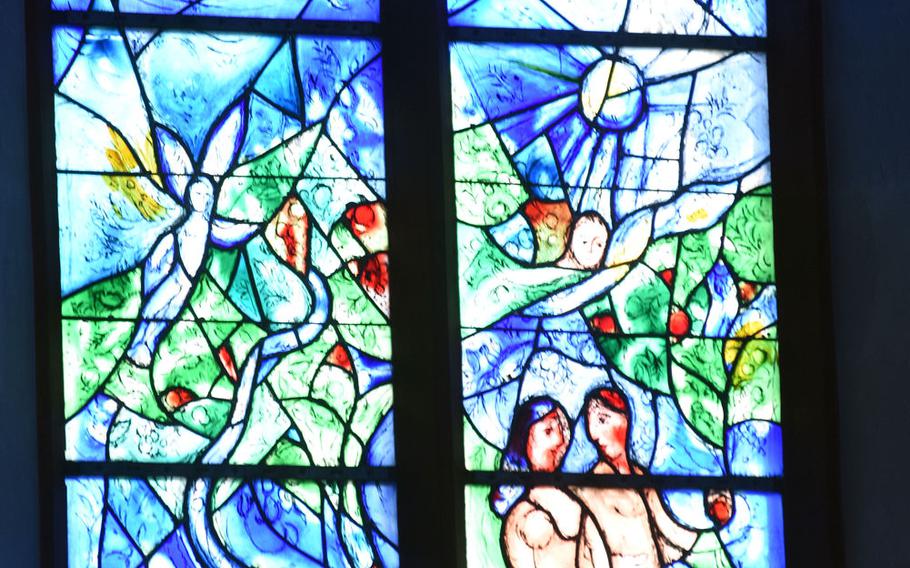 Buy Photo
Adam and Eve stand next to an apple tree in a Marc Chagall window at St. Stephan's church in Mainz, Germany. (Jennifer H. Svan/Stars and Stripes) 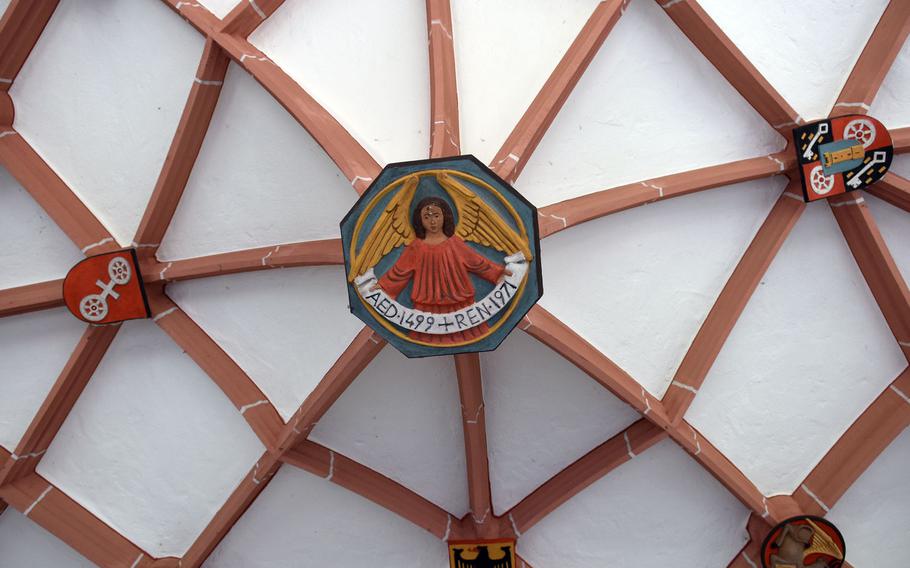 Buy Photo
An angel looks down from a keystone on the ceiling inside the cloister of St. Stephan's church in Mainz, Germany. The two dates on the scroll in the angel's hands are 1499, the year the cloister was completed, and 1971, the year it was renovated. Most of the church was destroyed during World War II and had to be rebuilt. (Jennifer H. Svan/Stars and Stripes) 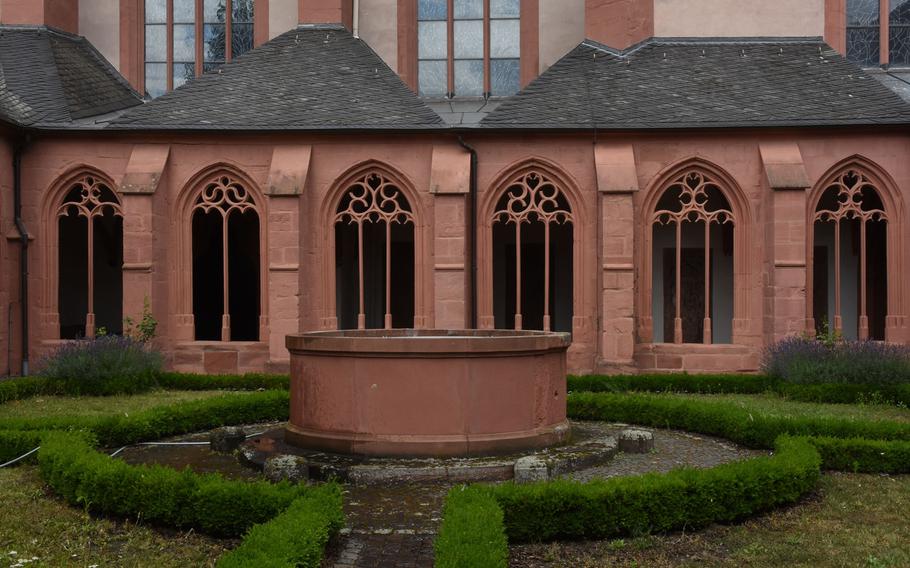 Buy Photo
Each portal inside the cloister at St. Stephan's church in Mainz, Germany, has a different lattice-pattern, cut from red sandstone. (Jennifer H. Svan/Stars and Stripes) 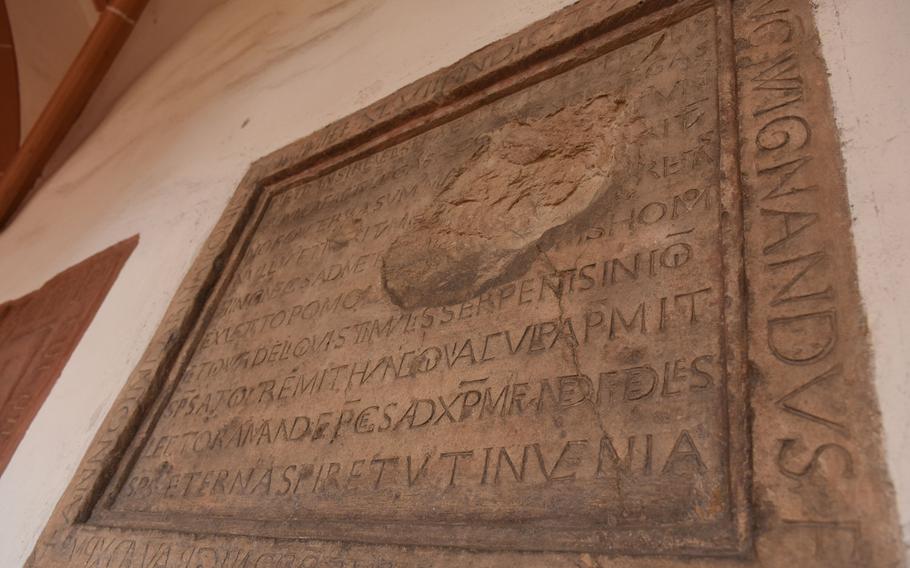 Buy Photo
A tomb sealed in the wall at St. Stephan's church in Mainz, Germany, bears markings from an artillery shell. The church was nearly destroyed during World War II and was later rebuilt. (Jennifer H. Svan/Stars and Stripes) 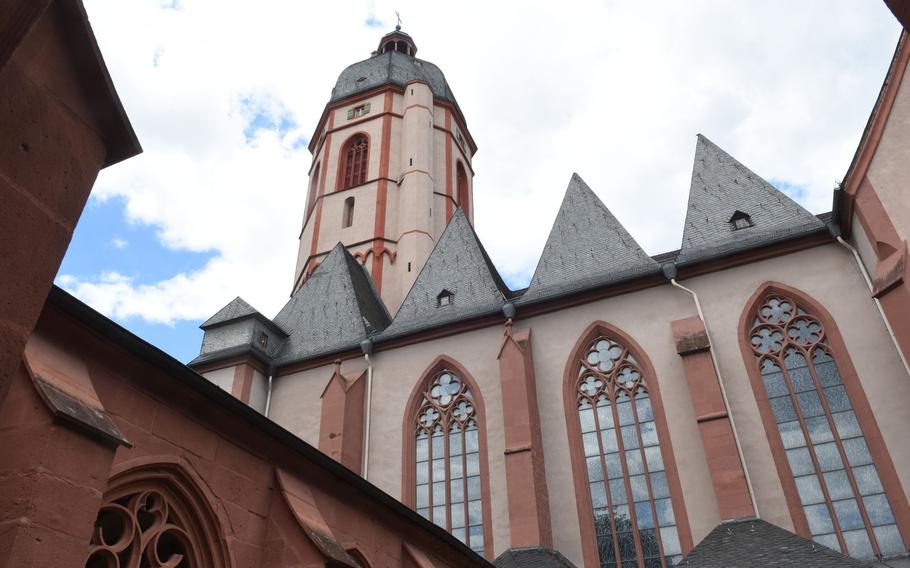 Buy Photo
St. Stephan's church sits above the old town in Mainz, Germany. The Gothic church has a simple facade but its interior is unique, due to the nine Marc Chagall stained-glass windows, the only collection of its kind in Germany. (Jennifer H. Svan/Stars and Stripes)

MAINZ, Germany -- To reach St. Stephan’s in this storied city by the Rhine River, you have to climb.

The hilltop Roman Catholic church overlooks the old town, reached on foot via stairs or cobblestones, depending on which route you take up a steep slope once used to cultivate vineyards.

From the outside, the Gothic house of worship looks unremarkable, its simple white and red sandstone facade not unlike so many quaint churches that dot a country where Christianity has been the predominant religion for centuries.

But the heart-pounding pilgrimage is worth the effort, once you swing open the creaky, heavy church doors and see a sea of blue.

St. Stephan’s is the only church in Germany to feature stained-glass windows designed by Marc Chagall, the late 20th-century Russian-French artist known for his vibrant paintings.

The church’s nine Chagall windows are distinctive for their indigo-blue hues, colors that render the portals luminescent when backlit by the sun.

Chagall began working in the medium late in his career. He designed a window at the Metz Cathedral in France, a 12-window series at the Hadassah-Hebrew University Medical Center in Jerusalem and the “Peace Window” at the United Nations building in New York City before his work at St. Stephan’s, his last before he died in 1985 at the age of 97.

In 1973, St. Stephan’s parish priest, Father Klaus Mayer, approached Chagall about the idea, according to a booklet in English sold for 4 euros at the church.

It would take several years of coaxing and persistent letter writing to win Chagall over, Mayer told the New York Times in 1999.

“After the war, he did not want anything to do with Germany,” Mayer, who turned 95 in February, was quoted in the Times. “I had to keep reminding him how important this was.”

Mayer eventually convinced Chagall to proceed with the work, which was intended to signify the friendship between France and Germany. “But above all, the Jewish artist working for a Christian church in Germany wished to create a visible token of the bond between Jews and Christians,” the booklet says of Chagall.

To that end, many of the glass panels portray themes and figures that are common to both Jews and Christians. They include “Paradise,” with Adam and Eve next to an apple tree with a serpent snaking up it, and Moses presenting the Ten Commandments. Angels, some in flight, are a common motif.

There are also scenes from the New Testament, such as Mary cradling a baby Jesus next to a grown Jesus wearing a crown on the cross. Vibrant shades of yellow, green and red serve to break up the blue.

Chagall chose to portray one particular biblical story that surely gave children paying attention in Sunday school nightmares: In one panel, Abraham holds a knife next to Isaac, a father willing to sacrifice his son for God.

While the central windows behind the altar are more narrative in nature, three windows by Chagall in the transept (along the side walls of the church) are more abstract, with 18 shades of blue, or “heaven in all variations,” according to the church booklet.

Nineteen additional windows, still blue but less ornate and vibrant than Chagall’s, were completed after the artist’s death by glassworks master Charles Marq, a longtime collaborator and friend of Chagall.

The Chagall windows add a hopeful chapter to a church that was nearly destroyed in World War II.

If you’re among the 200,000-some tourists who visit the church every year from Germany and abroad, be sure to step inside the adjoining cloister, said to be the most beautiful late-Gothic cloister in Rheinland-Pfalz. An old tombstone, now sealed in the wall, bears the remnants of an artillery shelling from the war.

DIRECTIONS: St. Stephan’s is located at Kleine Weissgasse 12, 55116 Mainz; it’s less than a 10-minute walk uphill from the Roman Theater parking garage and the Roman Theater train station.TIMES: March to October: Monday to Saturday, 10 a.m. to 5 p.m.; Sunday, noon to 5 p.m. November to February: Monday to Saturday, 10 a.m. to 4:30 p.m.; Sunday, noon to 4:30 p.m. Masses: Monday, Wednesday, Friday, 6:30 p.m.; Saturday, 6 p.m. and Sunday, 11 a.m.; 1st Tuesday in the month, 3 p.m.; other Tuesdays, 9 a.m.COSTS: Free. A donation box inside the church asks for 1 euro to help with church upkeep.FOOD: Plenty of restaurants a short walk from the church in downtown Mainz.INFORMATION: Call (49) (0) 6131231-640 or email: pfarrbuerost-stephan-mainzde; online (in English) at: www.mainz.de/en/worth-seeing/st-stephen-chagall-mysticism-of-blue-light.php. An information guide in English is for sale at church for 4 euros, as well as postcards and other Chagall window memorabilia.