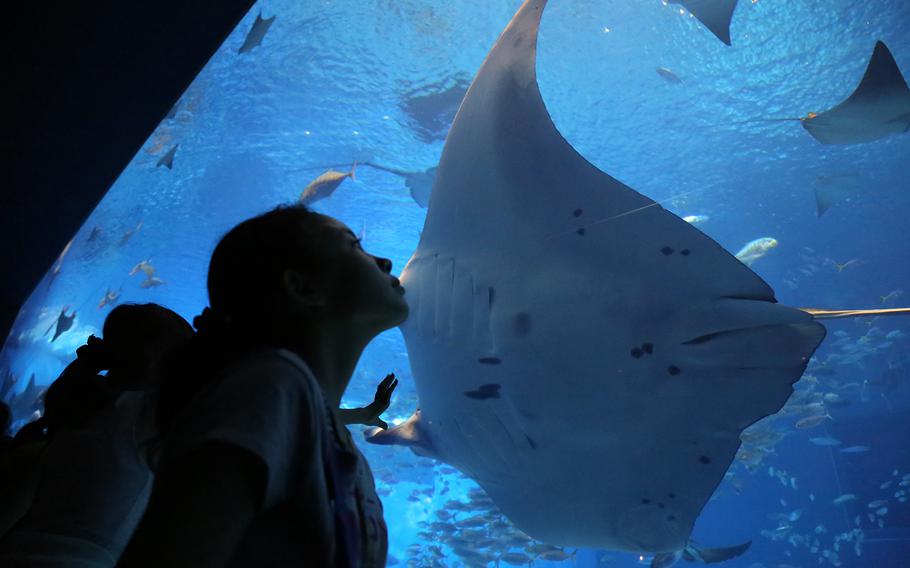 Buy Photo
Churaumi is home to many different types of rays including the largest ray, the manta ray. (Aya Ichihashi/Stars and Stripes)

Okinawa is so famous for its blue skies and white sandy beaches that most people assume it’s sunny year-round on the island. However, the tiny prefecture receives less sunshine than Japan’s nationwide average, with more cloudy days than not. And on cloudless days, temperatures often soar above 90 degrees Fahrenheit — which can be too hot for some to spend extended periods of time outdoors.

These less-than-ideal weather patterns can often be a headache for families living on Okinawa, as it limits the types of outdoor activities available to children. When my kids were younger, I was always on the hunt for places to go on rainy Saturdays or blazing hot Sundays. Luckily, Okinawa’s world-famous Churaumi Aquarium always provided the perfect solution for weekend outings.

Located on the Motobu Peninsula in northern Okinawa, Churaumi Aquarium is a part of Ocean Expo Park, a state-run park originally opened for the 1975 Okinawa International Marine Exposition. The park is a whopping 190 acres of family-friendly fun. Also located there are the Tropical Dream Center, a traditional Okinawa village; and the Oceanic Culture Museum, a dolphin show and athletics fields.

The aquarium’s name is a portmanteau of “chura,” the Okinawan word for “beautiful,” and “umi,” the Japanese word for “ocean.”

One of the most famous features of the Churaumi Aquarium is the massive Kuroshio Sea tank, which holds nearly 2 million gallons of water and measures more than 115 feet in length. The name “Kuroshio” comes from the ocean current of the same name, which originates near the Philippines and flows through Japan’s waters.

Visitors often flock to this exhibit to see the facility’s beloved whale sharks. The largest fish in the ocean, whale sharks average 30 feet in length and can live up to 70 years. The tank is also home to the rare black-belly manta ray — most manta rays have white bellies — and the aquarium is the only place in Japan to see these creatures up close.

Also living in the Kuroshio Sea tank are schools of nursing sharks, leopard sharks and about 70 other varieties of sea creatures. Don’t miss the feedings at 9:30 a.m., 3 p.m. and 5 p.m. daily to watch the whale sharks devour their meals of kelp and plankton.

There is ample seating in front of the tank to enjoy the breathtaking view of the Kuroshio marine animals. Hungry visitors can also get a glimpse of the tank from Ocean Blue, a cafe on site that serves everything from taco rice (600 yen, or about $5.40) to ice cream (310 yen).

If you are fascinated by sharks, but too scared to meet them in the ocean, the Shark Research Lab is the place to go. This exhibit is home to some of the more aggressive shark species, such as bull sharks. Here, visitors can also get a closer look at shark teeth and other specimens.

For a gentler experience, the aquarium’s “inoh,” or tide pool, exhibit allows visitors to touch a variety of creatures including starfish and sea cucumbers. The tide pool exhibit leads visitors into “The Coral Sea,” where more than 200 different species of fish live among colorful coral. Children might enjoy spotting clownfish and blue tangs, made famous in the animated film “Finding Nemo.”

Outside the aquarium, the Okichan Theater hosts free dolphin shows and is home to several sea turtles and manatees. It’s a nice way to break up a day spent indoors, if the weather is nice enough.

Ocean enthusiasts might want to venture to the aquarium soon, as it is currently hosting a special exhibit of rare giant manta rays. Visitors will get the unique opportunity to view giant manta rays, black manta rays and whale sharks together.

CHURAUMI AQUARIUMDIRECTIONS: From Camp Foster, take Okinawa Expressway and exit at Exit 10. Stay on R58 for 7 kilometers, then take R449 at the Miyazato Intersection. Stay on R449 toward Motobu for 27 kilometers. Turn onto R114 at the Urasaki Intersection and drive 2.5 kilometers.

FOOD: The aquarium has two restaurants and five snack bars. Prices range from 310 yen ($2.85) for ice cream to 1,520 yen for the lunch buffet inside the Inoh Restaurant.

INFORMATION:churaumi.okinawa/en. Free parking is available, and a bilingual staff is on hand.