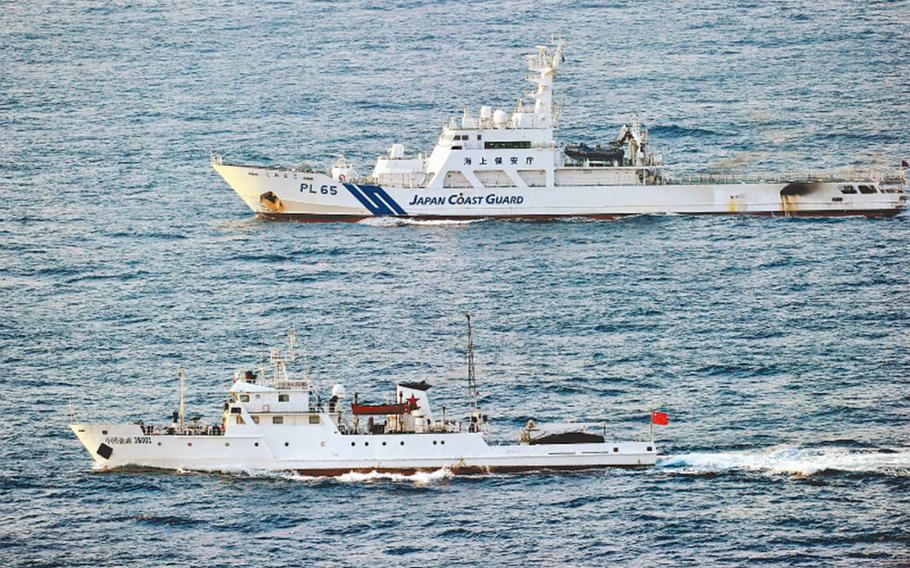 YOKOTA AIR BASE, Japan — Not long ago, China was the darling of its less powerful Asian neighbors with its growing economic importance and a policy of non-interference in external affairs that contrasted with bellicose U.S. foreign policy after 9/11.

However, a series of clashes over territorial disputes and Beijing’s tendency to economically punish those who get in its way have encouraged many Asian nations to reassess their choices — an increasingly aggressive Chinese dragon or a more distant and relatively benign America.

“U.S. stock in the region is going up,” said Robert A. Manning, a former State Department planner and now senior fellow at The Atlantic Council in Washington, D.C. The Chinese “have managed to foster real concerns about their intentions across the region, from India to Vietnam.”

The reasons behind the Chinese push aren’t known due to its closed system. It might be the need to find resources to fuel growth. Or Beijing may be flexing its military might amid the “Pacific pivot” by America that Beijing sees as a direct threat. It may even reflect internal Chinese battles over market reforms.

But a recent series of incidents has raised individual and collective concerns from India on one side to Japan and the Philippines on the other.

The People’s Liberation Army recently occupied land that India claims is 12 miles inside its border, part of dispute over tens of thousands of square miles of rugged frontier turf that has been unresolved since the two nations fought a brief war in 1962.

Most of the other territorial disputes are at sea, where nations are vying for control of exclusive economic zones, or EEZs, with governing rights to mineral reserves and fish stocks.

The disputes center on the ownership of thousands of uninhabited islands in the South and East China seas. The islands are small, but the EEZs that surround them — and the value of the resources that could be recovered within them — are vast and lucrative.

None of the islands in dispute is very close to China, and many are well inside what would appear to be other nations’ EEZs, but that hasn’t stopped the Chinese from aggressively pursuing claims.

In the Senkakus (called Diaoyu by China), PLA Navy frigates have locked fire-control radar onto Japanese ships and aircraft. The islands, controlled by the U.S. for a period after World War II, have been administered by Japan for more than a century, but sovereignty is disputed by China and Taiwan. There also have been close approaches to Japanese territory by suspected Chinese submarines.

Natural gas is likely the most valuable resource in the area of the Senkakus, but fisheries, oil and other minerals are also at stake, according to Jean-Marc F. Blanchard, a professor at Jiaotong University’s School of International and Public Affairs in Shanghai.

Estimates of the amount of natural gas haven’t been validated because the conflict between China and Japan limits exploration, he said.

“It would be seen as highly provocative for Japan to develop the area,” he said.

China, on the other hand, has started extracting oil and gas from nearby waters that are not in dispute, although the Japanese have complained that the fuels may be getting siphoned from its own territory.

Speaking at the U.S. Naval Institute in San Diego on Jan. 31, Capt. James Fanell, deputy chief of staff for intelligence and information operations at the U.S. Pacific Fleet, warned of a campaign by the PLA Navy’s civil proxy — China Marine Surveillance — to control the near seas.

Before 1988, China’s presence in the South China Sea was almost zero, he said.

“In 2013, they literally dominate it,” he said. “They are taking control of maritime areas that have never before been administered or controlled in the last 5,000 years by any regime called ‘China.’”

Throwing its weight around

Maritime confrontations haven’t been happening close to the Chinese mainland. Rather, China is negotiating for control of other nations’ resources off their coasts, Fanell said.

China has eight military installations on seven reefs in the Spratly Islands, including one just 115 miles off the Philippine Coast, he said.

“China is knowingly, operationally and incrementally seizing maritime rights of its neighbors under the rubric of a maritime history that is not only contested in the international community but has largely been fabricated by Chinese government propaganda bureaus in order to quote-unquote 'educate' the populace about China’s ‘rich maritime history’ — clearly as a tool to help sustain the (Communist) Party’s control,” he said.

China’s aggression on the high seas is accompanied by diplomatic and trade pressure that is no less unsettling to smaller nations.

China’s neighbors can’t develop oil and gas fields in disputed areas because of Chinese pressure on multinationals and insurers’ reticence to back projects, Blanchard said.

Last year, the 10 members of the Association of Southeast Asian Nations failed to reach agreement on the wording of a joint communique for the first time in 45 years. China doesn’t belong to the group but has been attending as an observer in recent years.

Bonnie Glaser, a senior adviser for Asia at the Center for Strategic and International Studies in Washington, D.C., said China pressured the meeting’s chair, Cambodia, to keep any mention of the South China Sea out of any final statement.

China has used its growing economic clout to advance its agenda.

In September 2010, after Japan detained the captain of a Chinese trawler who was fishing near the Senkakus, Beijing blocked shipments of rare earth minerals — a vital component of modern electronic products — to Japan.

“The embargo was viewed by many experts as evidence of Chinese willingness to use economic leverage to have its way in an international dispute,” Glaser said.

Soon after its clash with the Philippines over the Scarborough Shoal, China blocked hundreds of containers of Philippine bananas from entering its ports, claiming they contained pests, Glaser said.

However, China is paying a price: Blanchard said the maritime disputes are helping the U.S. shore up its ties to other nations in Asia.

“Countries such as Vietnam, Indonesia and Singapore and Australia have inclined more to the U.S. as a result of perceived Chinese aggressiveness,” he said. “That is a cost to the Chinese.”

China purchased goodwill in the 1990s in Southeast Asia, but those nations now worry they may be dominated, Blanchard said.

“These worries weren’t present five to 10 years ago,” he said.

Personnel in the U.S. Pacific Fleet have detected a sea change in attitude, Fannel said.

“In 2007, we weren’t particularly popular in East Asia,” he said. “We had trouble getting port calls for our ships or landing permission for our aircraft.”

Beijing’s conduct at sea has turned that around 180 degrees, he said.

“East Asia now remembers why they liked America,” he said. “They definitely want us there and supporting them as they try to defend their rights.”

More nations want U.S. ship visits than can be accommodated, he said.

“I have more invitations to meet with my counterparts in East Asia than our pre-continuous resolution-impacted travel budget can afford,” he added.

Most of East Asia outside of China is enjoying the fruits of liberal democracy, Fannel said.

“Even autocratic Vietnam is prospering under this existing world order,” he said. “They like it, and they don’t want it encroached upon or taken away by a hegemonic China.”

The change in attitude is impacting everything from military purchases to trade negotiations with the U.S., Blanchard said.

For example, Japanese politicians are more inclined to look at joining free trade talks despite opposition from agricultural and manufacturing interests. And there’s more support for Japanese military spending, which could be vastly increased, Blanchard said.

In January, the Japanese cabinet voted to increase annual military spending for the first time in 11 years — to $51.7 billion — still less than 1 percent of the nation’s gross domestic product.

Australia — which will spend $24.2 billion (less than 1.6 percent of its GDP) on defense this year -- could also spend more on its military. Ironically, the Australian economy has boomed in recent years due to natural resource sales to China, Blanchard said.

The U.S. and India — the world’s two largest democracies — participate in dozens of cooperative defense events each year. India, which is acquiring fleets of C-17 Globemaster transports and P-8 Poseidon surveillance aircraft, is a growing market for U.S. military hardware.

A reflection of politics?

So why would the Chinese seek confrontation when there are so many downsides?

“I’m not sure if it reflects a strategy as much as a dominant interest group flexing its will in their political system,” Manning said.

Some in China may have believed that the global financial crisis that started in late 2007 signaled the decline of the U.S. and that the time was ripe to become more assertive, he said.

“They may have grossly miscalculated,” Manning said. “Of all the major powers, the U.S. has the best prospects for an economic resurgence.”

It also is possible that the administration of China’s newly appointed president, Xi Jinping, might change course.

Blanchard said it’s still unclear how secure and strong China’s new leaders are, what their relationship is to the PLA or whether they will continue the confrontational policies of their predecessors.

Future Chinese aggression might be dictated by such factors as the need for the new leaders to appear strong or pressure from the PLA, he said, while noting that Chinese leaders can also be pragmatic.

“If they have costs imposed on them they might back off.”

Manning agreed that Chinese leaders might seek to stoke the fires of nationalism to legitimize their power as their economy cools.

China needs to make market-oriented reforms, but they are being blocked by special interest groups such as state-owned enterprises and the military, he said, but added:

“If I was China’s leadership, I would want a peaceful external environment for all this to play out in.”