‘Chicken Shack’ lives up to barbecue lore near Iwakuni 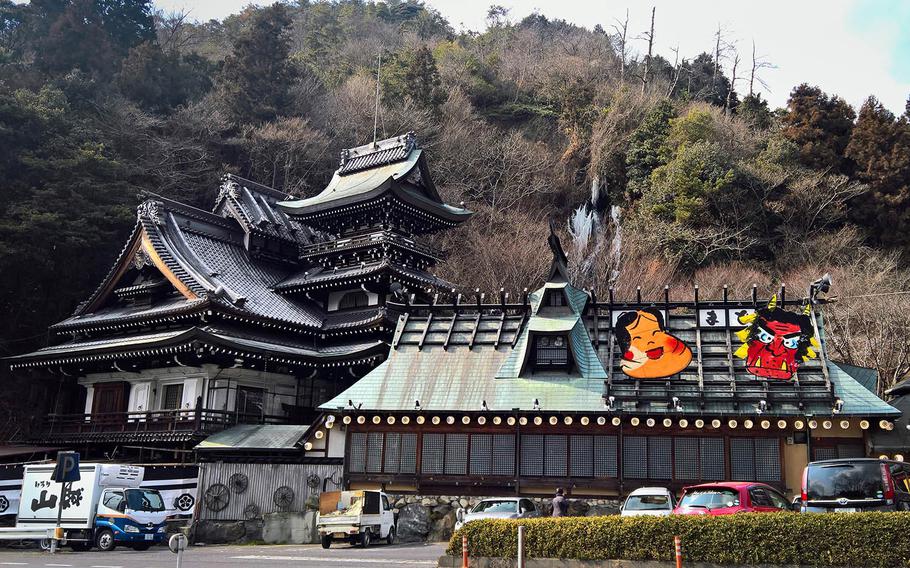 Tourian, left, and Kamado, right, are two of the Sanzoku restaurants in the Kuga Areaknown as the "Chicken Shack" by those at Marine Corps Air Station Iwakuni, Japan. (James Bolinger/Stars and Stripes)

Tourian, left, and Kamado, right, are two of the Sanzoku restaurants in the Kuga Areaknown as the "Chicken Shack" by those at Marine Corps Air Station Iwakuni, Japan. (James Bolinger/Stars and Stripes) 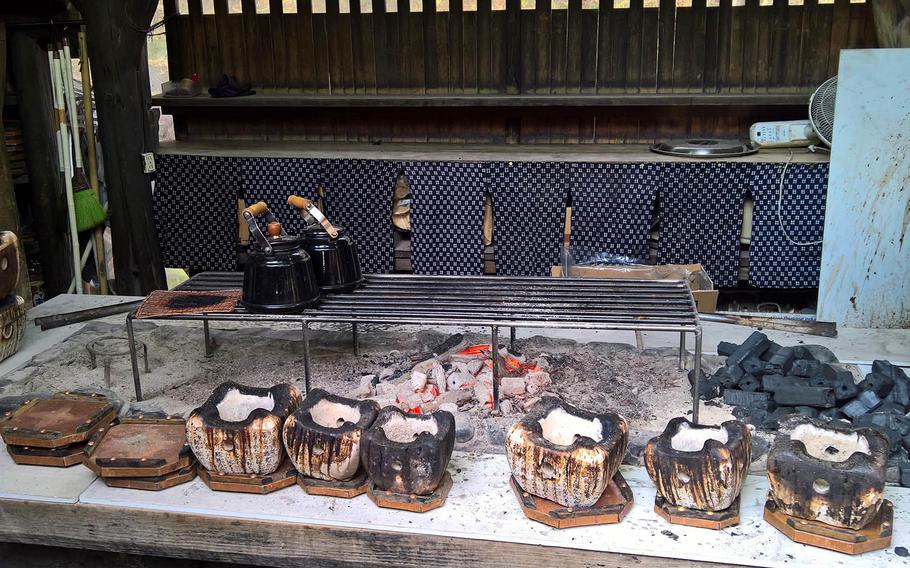 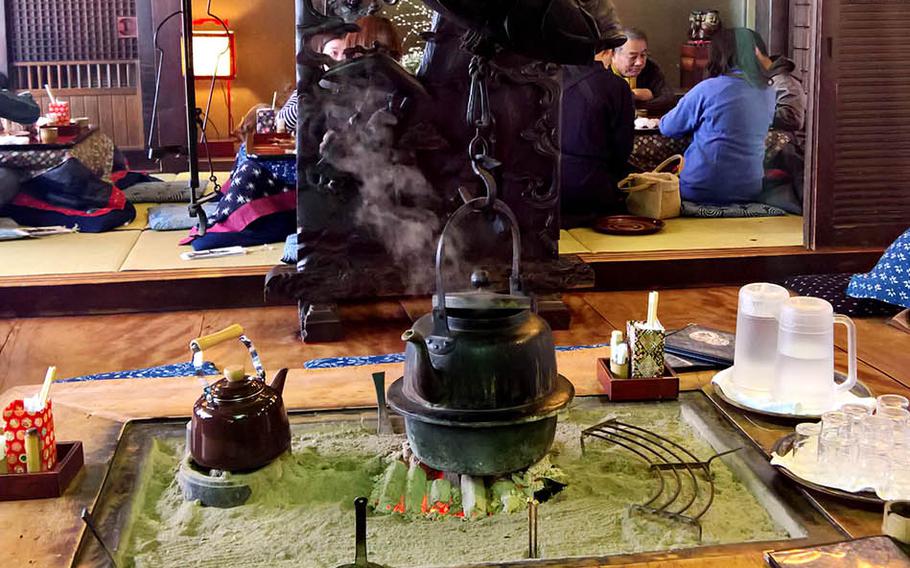 A metal coy fish supports a steaming kettle in the center of a table at Kamado near Marine Corps Air Station Iwakuni, Japan. (James Bolinger/Stars and Stripes) 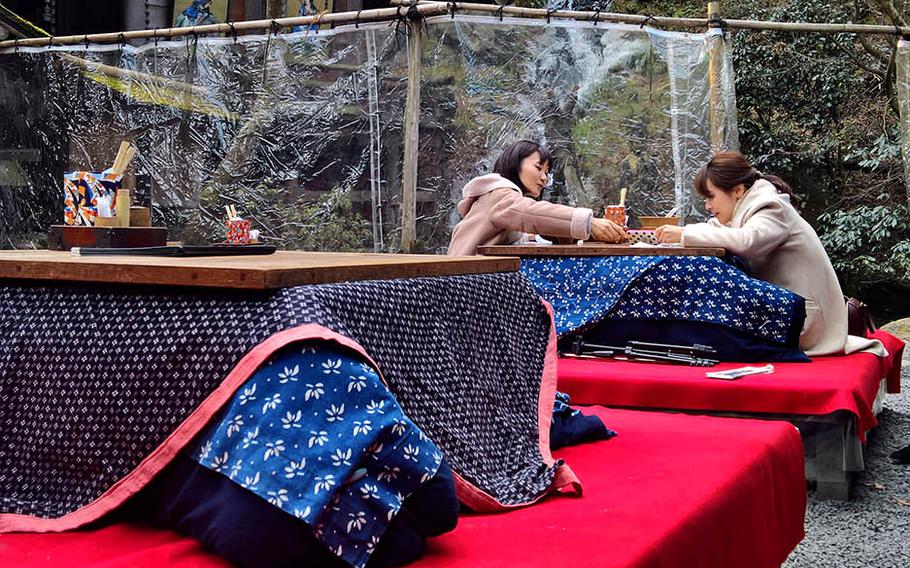 The outdoor dining area at Kamado, near Marine Corps Air Station Iwakuni, Japan, is filled with brightly colored tables at the base of a waterfall. (James Bolinger/Stars and Stripes) 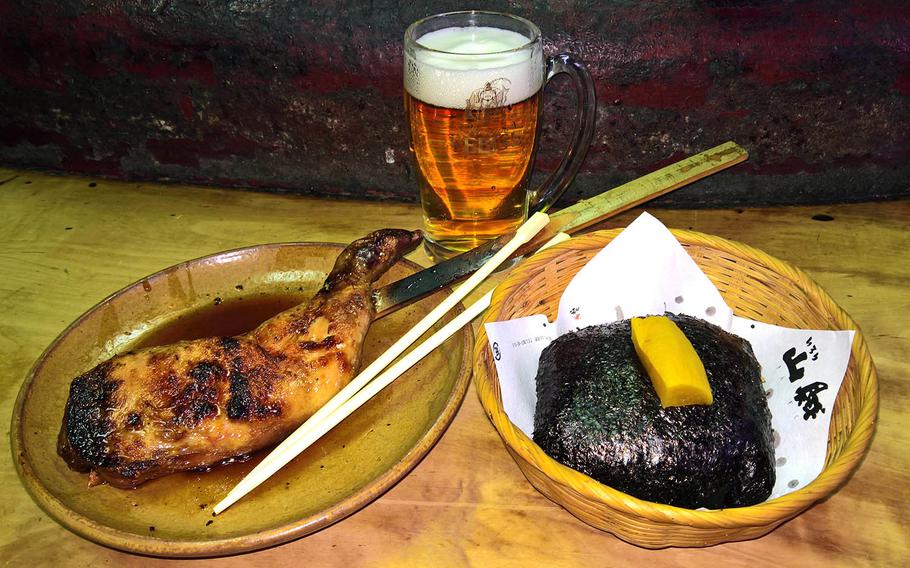 The so-called "Chicken Shack" near Marine Corps Air Station Iwakuni, Japan, is known for its chicken on a stick. (James Bolinger/Stars and Stripes) 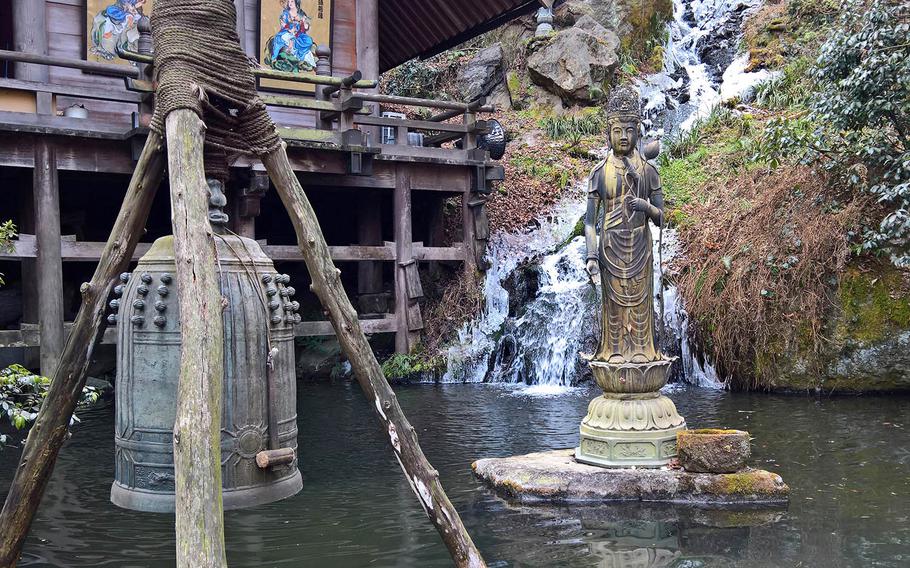 I’d been in Japan for only three days when I first heard about the “Chicken Shack” during an impassioned welcome-aboard brief at Marine Corps Air Station Iwakuni.

As Sgt. Maj. Christopher Garza explained the importance of traveling throughout Japan and learning about a new culture, he described a local restaurant that every inbound servicemember should try — Irori Sanzoku, known by Americans as the “Chicken Shack.”

I made a note in my planner and eagerly awaited my liberty card, so I could try this legendary eatery in the heart of Yamaguchi Prefecture.

And it is legendary, as far as restaurants near Iwakuni are concerned. A quick Google search for “Chicken Shack Iwakuni” brings up reviews on local blogs and more famous websites such as TripAdvisor.

There are actually three sister restaurants — Irori Sanzoku, Kamado and Tourian — in a spot along Route 2 called Kuga Area. Prices and variety vary, with Sanzoku being the most affordable and Tourian the most expensive.

I picked up a cab from the base, and took a 20-minute ride into the mountains west of Iwakuni — my first trip off the installation since I’d arrived. The drive on a small rural highway that winds between steep mountains is reminiscent of West Virginia back in the United States.

When I arrived at Kuga Area, I was immediately greeted by the smell of charcoal. Not the American barbecue-joint scent of smoked pork, but something much crisper, like the clean smell of a burning campfire.

I quickly followed my nose through a small courtyard and under a short awning that opened into a beautiful outdoor dining area where benches draped in bright red cloth surround dark blue covered tables. The courtyard overlooks a partially frozen waterfall with a serene pond at its base. A statue of Kannon Bodhisattva, the Lord of Compassion and the Goddess of Mercy, rises from the water to stand watch over diners.

After snapping a few pictures, I was escorted inside and seated at a curved central island with stools made from tree stumps. I was immediately struck by a thin layer of smoke from cooking fires that lingered in the air, making my mouth water in anticipation for what was to come.

I ended up at Kamado, which offers a wide variety of dishes on an English menu. It offers draft beers and sake, but I came for the house specialty — chicken on a stick. To round out my meal, I picked one more item off the house specialty menu — a rice ball filled with salmon and tightly wrapped in nori, or dried seaweed.

The food and drinks came out quickly, likely because I had missed the lunch crowd, and it was easy to taste why a crowd might gather here.

The chicken was as good as advertised by both the sergeant major and local blogs. With a crispy skin, plenty of smoky flavor and basted-in teriyaki sauce, it is a dish that would be popular in any stateside city. And in the spirit of good barbecue, the best way to eat it is to get your hands dirty, especially since a wet towel is provided by the wait staff for cleanup.

While I finished my meal, I enjoyed the atmosphere of a place that is obviously beloved by locals and the Americans who often visit from the air station. The polite staff delivered cold beers, piping hot bowls of noodles and beef, and of course a steady stream of chicken to hungry customers sharing good food and stories.

There are several places to sit, including the island, the courtyard, a balcony overlooking the main floor, and for a more traditional Japanese dining experience, there are several tables where you sit on the floor. One large table surrounds a bed of coals and a large metal koi fish supporting a large steaming kettle.

The smaller Irori Sanzoku across a small parking lot has a large outdoor seating area, while Tourian is situated in a large multistoried structure built to resemble a Japanese castle.

My meal, including one beer, came in just a touch over 1,700 yen, or about $15. A price well worth the trip, although you should take a taxi if you plan to drink.

There is much more to see at Kuga Area than just the restaurant. Had I not had a taxi waiting on me, I easily could have stayed for several hours and enjoyed the forest, the other restaurants and a few more beers.

This is definitely a place I will return to, likely very soon, as there is much more to taste and see at the “Chicken Shack” of Iwakuni.

Prices: Specialty items start at 400 yen for a small bowls of noodles and top out at 1,300 yen for tea and buckwheat noodles.

Directions: A 20-minute drive MCAS Iwakuni along Route 2 in the Kuga Area.