Chase's competitors were the ones doing the chasing 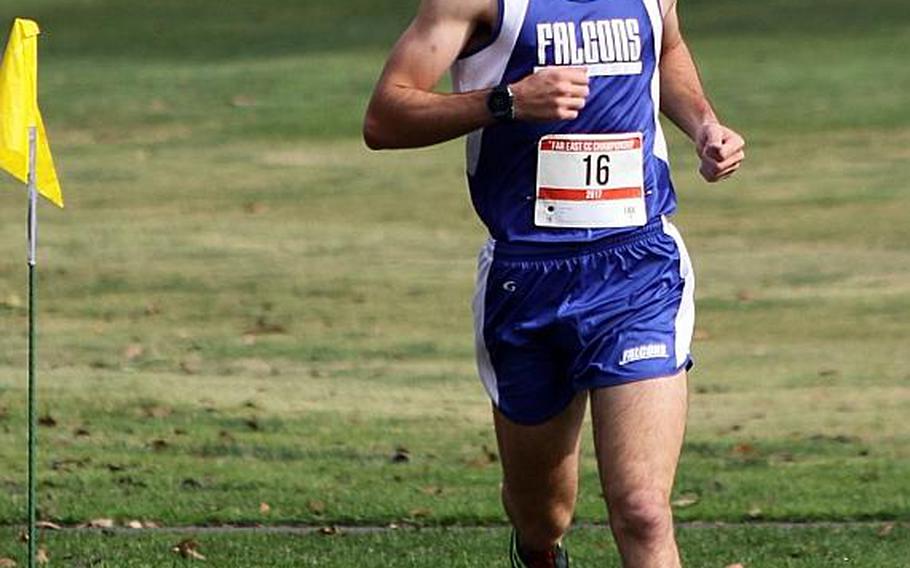 Senior Tucker Chase of Seoul American beats a path to the finish line of the Far East cross country meet; he won in 16 minutes, 52 seconds. (DeAngelo Galang/Special to Stripes)

Luke Voth instantly recognized the young man darting out of the woods, the shock of dark hair and the tell-tale stride he said he remembered seeing four years earlier on Kanto Plain cross country courses.

“I said to myself, ‘Oh, no, I know who this is,’” said Voth, Nile C. Kinnick’s coach, about seeing Seoul American senior Tucker Chase, leading the way toward the finish line of the Far East cross country meet last week at Misawa Air Base.

Chase came across the line first in 16 minutes, 52 seconds. Not his personal best – that was 16:26 during a meet at his home course on Sept. 23. But he ran a good 13 seconds ahead of his nearest competitor, Leonardo A’DeLima of St. Mary’s and 15.4 ahead of Kinnick’s Akimanzi Siibo.

It had been four years since Voth had seen Chase, who transferred to Seoul American from Hanalani Schools in Hawaii. Prior to that, Chase had run for Zama as a middle school student and Voth remembered how he ran a 12:22.4 in the 2013 Kanto Plain finals on a 2.1-mile course.

“He was really good then. He stood out then,” Voth said of Chase. “The name didn’t dawn on me (until) the first time he came out of the woods (at Far East) and I saw that stride. I knew. I wish I’d prepared Aki better.”

Chase’s Far East victory was the sixth victory in seven races this season, including an 18:08 in the Korea district championships three days after Far East. And Seoul American’s boys finished unbeaten for the third straight season in league races.

For that, Chase has been named Stars and Stripes’ Pacific boys cross-country Athlete of the Year.

Chase entered a Falcons program that was already strong, but coach Joseph O’Connor said he only made the team that much better.

“His passion for running was far more evident and outgoing,” O’Connor said. Past standouts “had a clear love for the sport as well; however, Tucker’s was a bit more contagious to the team in general.”

Chase brought what O’Connor called a “sense of camaraderie” to the team.

While O’Connor said Chase could easily motivate and talk people up, Chase said it was opposite. “I think it was them motivating me, always having my teammates there to remind me why we’re here and what our goals are,” he said.

To demonstrate he was about team, Chase says he has a shirt that explains his position.

“There’s a big 5 in the middle and a small 1 in the corner,” he said. “It takes five to make a varsity team to score points. The 1 is an individual part, the 5 is the bigger one. Put the 1 and the 5 together and it represents 15, a perfect cross-country team score.”

And while working alongside his teammates to push each other and get as low a score as possible, Chase says he tries to put opposing runners out of his mind, listening to something his mother taught him.

The attitude that Chase brought to the course spilled over to his teammates, especially the younger ones, fellow Falcons senior Chloe Byrd said.

“He brought a positive light across the whole team,” Byrd said. “A lot of the athletes are underclassmen and they really looked up to Tucker. Somebody was looking out for them. They weren’t in this alone. He served as a mentor to all the students.”

Sadly for the Falcons, Chase only ran for them for one season, something which “comes with the territory” at Seoul American, O’Connor said. “We typically have our kids for about two years.”

But Chase says he’ll take the accolades he and his team earned happily. “I’m grateful for being part of such a good team,” he said.