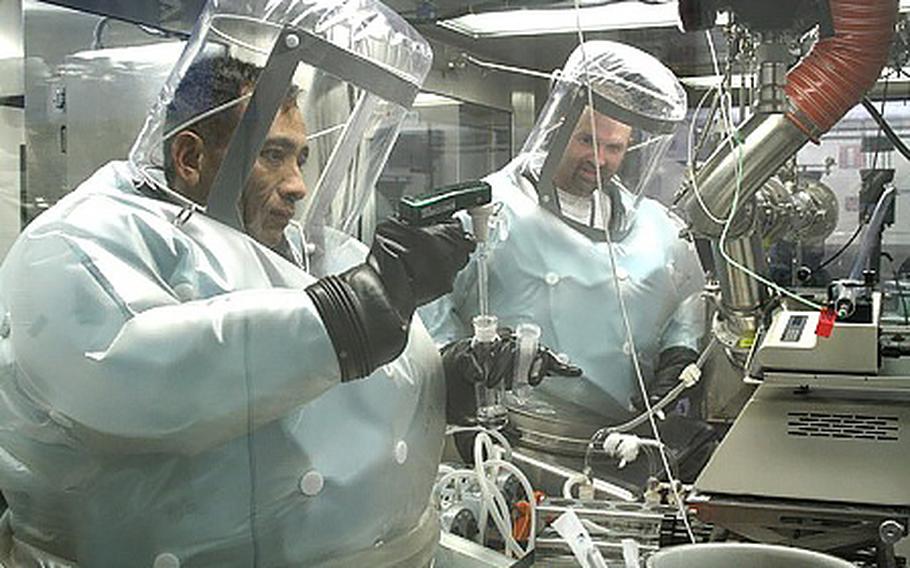 Personnel at Dugway Proving Ground, Utah, conduct laboratory work. Through its West Desert Test Center, the facility offers two primary services: testing and training. In May, the Pentagon reported that live anthrax samples had been sent out from Dugway. On Thursday, Sept. 10, 2015, the Centers for Disease Control and Prevention reported that military facilities have shipped out plague samples. (U.S. Army)

The Centers for Disease Control and Prevention raised concerns after it discovered a sample of the plague in a facility freezer “outside the containment area” at the Edgewood Chemical and Biological Center in Maryland, Pentagon press secretary Peter Cook said.

While the sample was labeled by the facility as inactive, the CDC “is conducting additional testing” to determine whether it was an infectious threat.

The CDC also raised concerns about a strain of equine encephalitis found at the facility.

Cook could not confirm whether the mishandled plague strain is the same one that caused the bubonic plague blamed for the deaths of millions in the 14th century. (The disease is now treated with antibiotics.)

The plague bacteria was discovered as part of the Centers for Disease Control and Prevention’s investigations of the Pentagon’s facilities that handle and store dangerous biological material: Dugway Proving Ground in Utah, and U.S. Army Medical Research Institute of Infectious Diseases, Edgewood Chemical and Biological Center and Naval Medical Research Center, all in Maryland.

The CDC investigation was launched after the Pentagon reported in May that it had sent anthrax samples to a handful of labs and states and one foreign country. That number rapidly grew worldwide as it became evident that more than half the master strains used to cull samples at its lab at Dugway were live when the lab thought they were inactive.

Last week Army Secretary John McHugh ordered a suspension on shipments of biological agents of any kind from any DOD facility and a 10-day “immediate safety review.” No illnesses have been reported as a result of the mistakes, and no one has been held accountable for the releases. The Pentagon said it is waiting for the final report on the shipments, due in October.