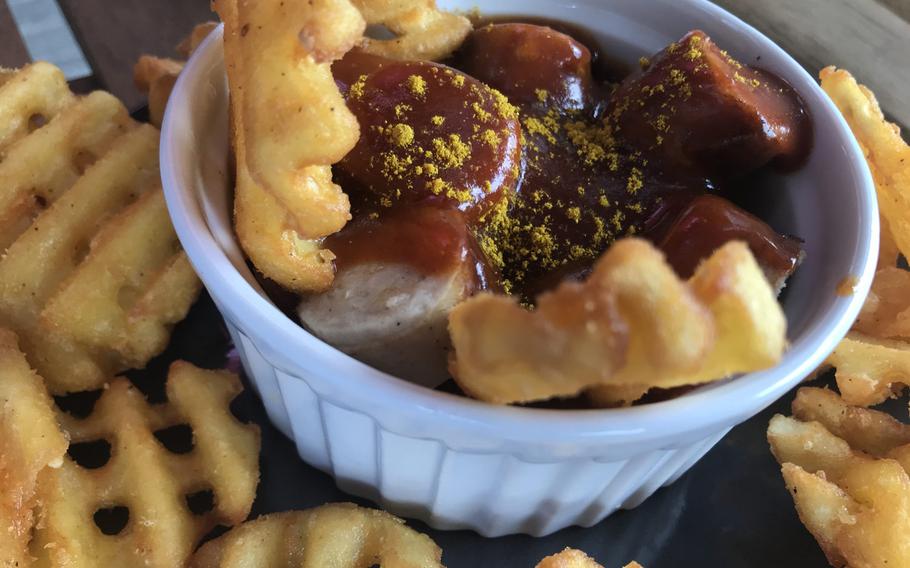 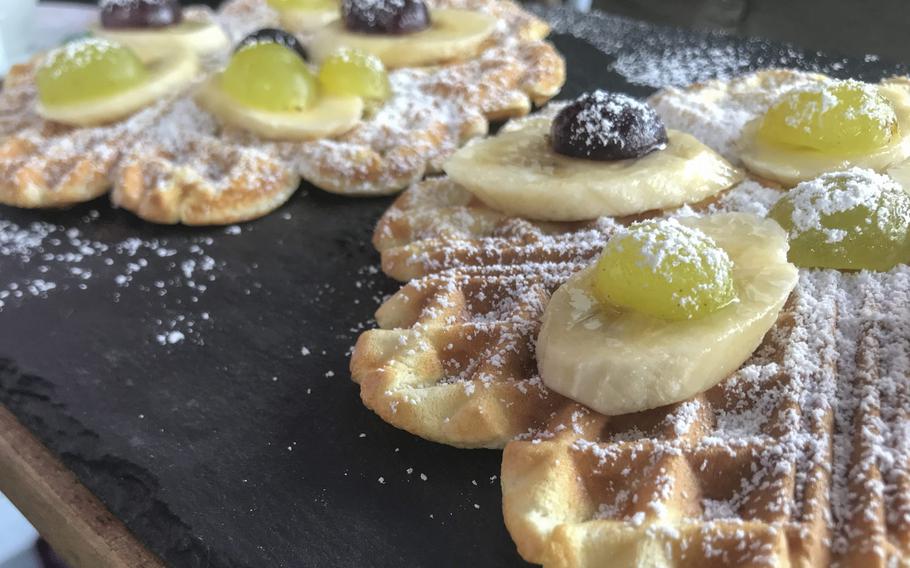 Buy Photo
Fruit-topped waffles, a Sunday special, were served up at Storchenturm in Kaiserslautern. (Chad Garland/Stars and Stripes) 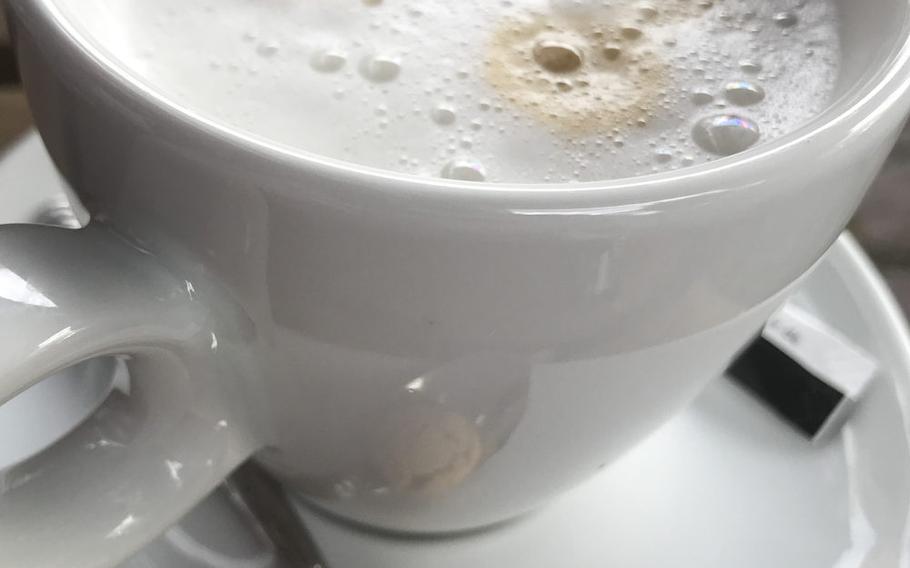 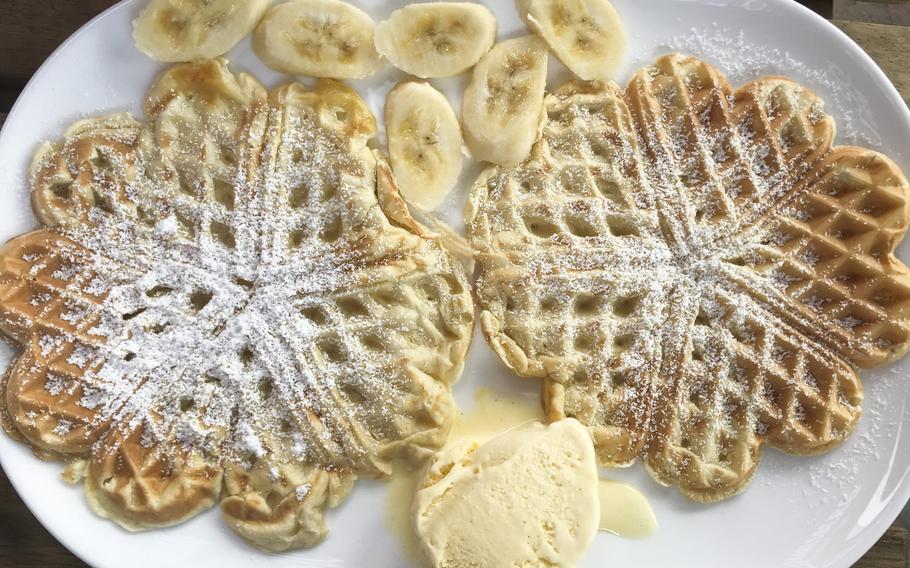 Buy Photo
Available with fruit toppings or vanilla ice cream, ''all you can eat'' waffles were served up for about $8 at Storchenturm in Kaiserslautern. (Chad Garland/Stars and Stripes) 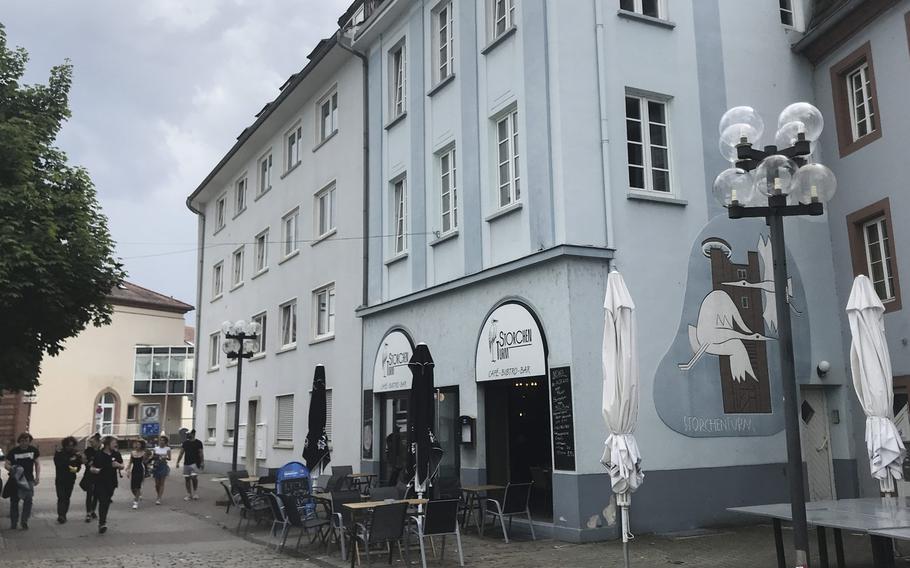 The Kaiserslautern cafe/bistro/bar Storchenturm has done an on-again, off-again routine both baffling and familiar to me after more than three years living in this town.

I was just becoming a regular last fall when I heard it had shut down. Not “would,” but “had,” seemingly without warning. I didn’t have long to mourn: It reopened this spring, though fitfully.

One sunny afternoon this month, a post on the fledgling Facebook page of the Stork, as I call it, advertised new food specials. I quickly invited a friend to join me for $8 all-you-can-eat waffles al fresco, optimistic the blue skies would hold out.

But first, I messaged the cafe to make sure it was indeed open. One never knows in these parts. Things seem to change as quickly as the weather.

The day before, the same friend and I had stepped out from under leaden skies and light rain into a bar whose door was open, if not inviting. Two employees promptly told us it was closed.

Stepping back into the drizzle, we remarked on stereotypes of German hospitality before venturing on to a burger joint we’d previously enjoyed. We were pretty sure it would be open.

Along the way, we mused on the vagaries of local business practices, where operating hours, let alone days or large swaths of the months in summer, were often unpredictable.

Shops and eateries that seem very popular tend to suddenly snap out of existence. Then sometimes they pop back into being as unexpectedly. Others seem never to open or fold as quickly as they open.

Both of us rattled off recent examples, several in the section of the pedestrian zone we were then on. Storchenturm, about a block further down, fit squarely on the list.

We had played Scrabble at an outdoor table over drinks on a few pleasant evenings there last September. Then it closed “permanently” before our planned rematch in early October.

In mid-March, balloons and streamers decorated its windows. The local German paper heralded its rebirth. But weeks later it seemed stillborn.

A rapid response to my Facebook message in mid-August, however, confirmed that the eatery nestled behind the Rewe shopping center on Stiftsplatz was indeed alive — again — its waffles standing by.

After finding a cozy outdoor table, my friend and I ordered coffee drinks. They turned out to be about standard for Germany.

I also ordered a currywurst, which came in a “stork’s nest” of delightfully golden and crisp waffle fries. I don’t want to think about what role the wurst, again about average, played in the extended nest metaphor.

The waffles themselves — one pair arrived with grapes and bananas, another with bananas and vanilla ice cream — were a thin variety made up of five heart-shaped petals, as if a crepe and an Eggo had a brood of underfed flower children, dusted with powdered sugar.

I was not ambivalent about these waffles. I’d have much preferred their distant cousin, the chunky, deep-welled Belgian street food variety, crusted with a sugary clearcoat.

In the end, the best part of the new Storchenturm is what charmed us in its earlier incarnation — fast, diligent servers and comfy outdoor seating on a lightly trafficked side street.

But, just as we paid our tab, dark clouds rolled in overhead and we felt a light spritzing.