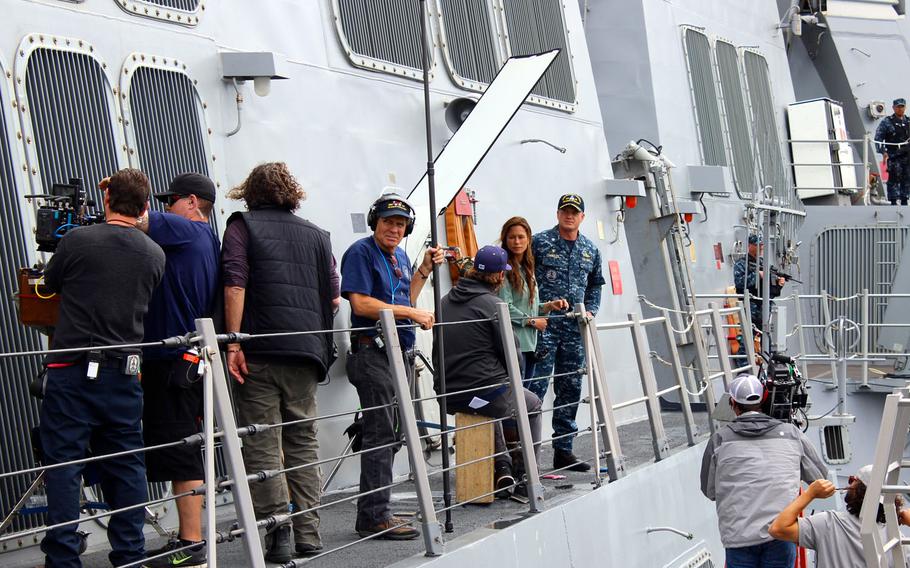 Eric Dane and Rhona Mitra, who play Cmdr. Tom Chandler and Dr. Rachel Scott in "The Last Ship," shoot a scene for the show's second season recently aboard the USS William P. Lawrence at Naval Base San Diego. (Jennifer Hlad/Stars and Stripes)

Eric Dane and Rhona Mitra, who play Cmdr. Tom Chandler and Dr. Rachel Scott in "The Last Ship," shoot a scene for the show's second season recently aboard the USS William P. Lawrence at Naval Base San Diego. (Jennifer Hlad/Stars and Stripes) 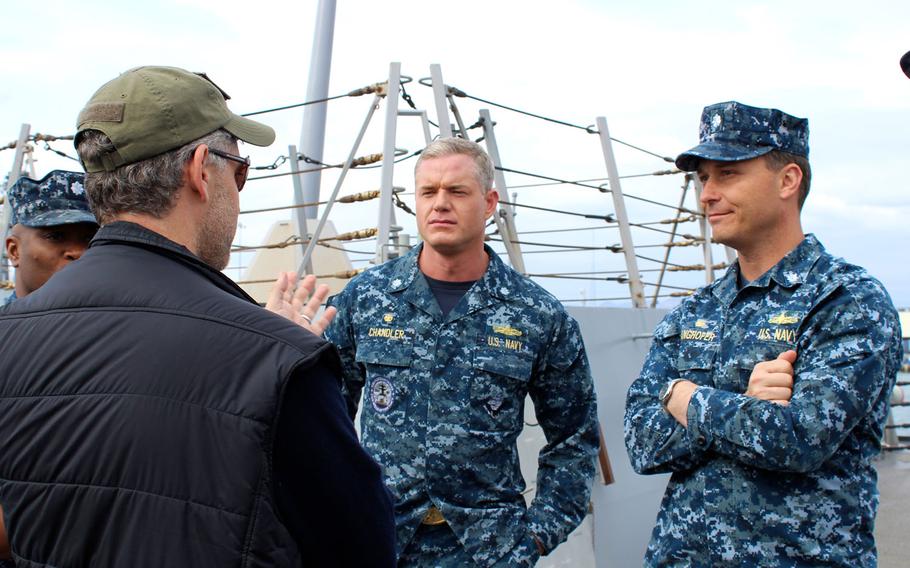 Eric Dane, center, who plays Cmdr. Tom Chandler on the TNT Drama "The Last Ship," and Cmdr. Chanden Langhofer, right, the real-life commanding officer of the USS William P. Lawrence, chat with Steven Kane, co-creator and executive producer of the show, during filming on the ship at Naval Base San Diego. (Jennifer Hlad/Stars and Stripes)

Last season, the crew of “The Last Ship” had to overcome al-Qaida terrorists, evil Russians and a global pandemic. This season, they’ll have to survive post-apocalypse America.

The Navy-centric drama sails back onto TV screens June 21 stateside and June 22 on AFN-Prime. The crew of the fictional guided missile destroyer USS Nathan James will learn that finding the cure to the disease that wiped out most of the world’s population was the easy part, one of the men who created the show said.

As filming wrapped up aboard the USS William P. Lawrence at Naval Base San Diego, Steven Kane told Stars and Stripes that he did extensive research and went on a tour of a Navy ship before even writing the pilot episode with fellow executive producer and creator Hank Steinberg.

They really wanted to get the culture of the Navy right, he said, so they spent a lot of time asking questions, listening to sailors and learning traditions.

“We just tried to get it right as best we could,” he said.

Some of the things that happen on the show — like the commander, executive officer and command master chief all going on a mission together — are unlikely, he said, “but it’s the apocalypse, so you never know.”

The real focus is on things like the idea of honor, courage and commitment, he said. But he still cringes when he looks back on the pilot, and sees the commander of the ship salute while he’s not wearing a cover.

Steinberg said he was fascinated by the existential premise of the show, and the idea of having it on a Navy ship, but didn’t know much about the Navy.

Now, he said, “I am blown away by the level of service and commitment that these young people are willing to do for our country. They sacrifice quite a bit. It’s very inspiring, and it’s inspiring to the whole crew.”

Charles Parnell, who plays Command Master Chief Hugh Jeter, said he read about Navy history before shooting began, but has learned a lot from the active-duty sailors who work with the crew on the show.

The pilot episode was filmed entirely on an active Navy ship, and all the extras were Navy sailors, Parnell said. On the first day, the crew met some of their real-life counterparts at lunch.

Parnell got a tour of the ship through a master chief’s eyes, and was able to ask him “the stupidest questions” for two days, he said, which was invaluable. And he’s continued to learn — one person told him that master chiefs always have coffee, so he has tried to incorporate a coffee mug into some scenes, he said.

“Every time I meet a master chief, they’ll take me aside and give me a different pearl of wisdom,” Parnell said.

In general, he said, the Navy has been “ultra helpful, and he has gained a lot of respect for sailors just by seeing how seriously they take the work of helping out on the show.

“It made me proud to have these young people protecting us, and it made me feel secure,” he said.

Jocko Sims, who plays Lt. Carlton Burk, said the show is the best job he’s ever had as an actor.

“I learned very quickly that playing a lieutenant in the navy, it’s not just another acting job. It’s a special privilege,” he said.

Eric Dane, who plays the ship’s commanding officer, Cmdr. Tom Chandler, said the show simply couldn’t be made without the Navy’s support.

Obviously the cast and crew need the ships, uniforms and other items the Navy can provide, he said, but it’s really the answers and advice they get that make a difference.

Because it’s a television show, many of the scenarios are very sensationalized, he said. But the help from the Navy “really helps us root these stories in reality.”

As the second season begins, a new villain will emerge and the ship’s crew will realize that the situation at home is even worse than they anticipated, Steinberg said. They’ll deal with the challenge of a shattered infrastructure, nonexistent military command structure, and obstacles getting the vaccine and cure disseminated, he said.

Rhona Mitra, who plays Dr. Rachel Scott, said the storyline also will allow for more character development, as each person reacts to the changed world.

“It really puts the audience and all the cast members to the task of asking, ‘Who am I, really, inside, when all these institutions fall away?’ ” she said.