Carter to Army’s 101st: You will prepare Iraqis to retake Mosul 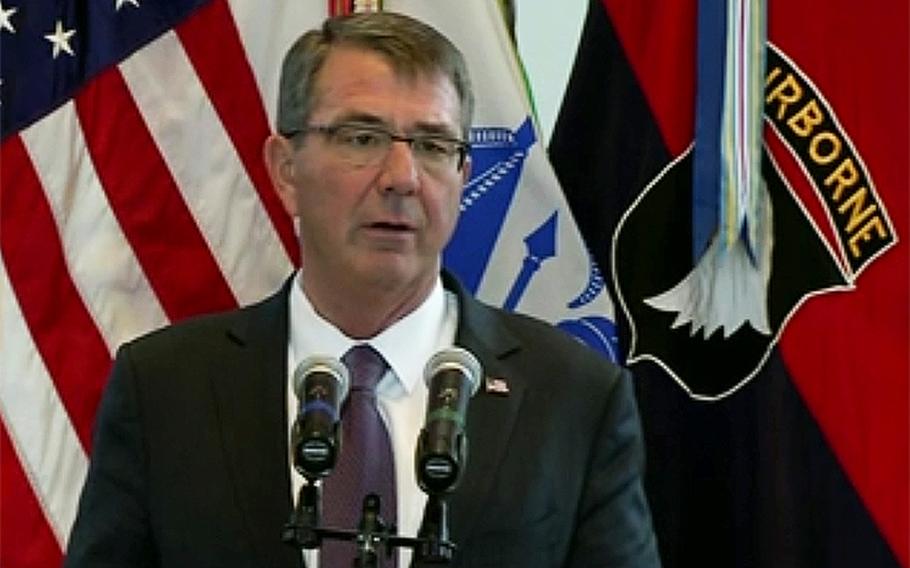 In a screen capture from a Defense Department video, Secretary of Defense Ash Carter speaks at Fort Campbell, Jan. 13, 2016. (DOD)

Some 1,800 soldiers from the 101st’s Headquarters and its 2nd Brigade Combat Team will deploy soon on regular rotations to Baghdad and Irbil to train and advise Iraqi army and Kurdish peshmerga forces who are expected in the coming months to move toward Mosul, the Islamic State group’s de facto headquarters in Iraq.

“The Iraqi and peshmerga forces you will train, advise and assist have proven their determination, their resiliency, and increasingly, their capability,” Carter said. “But they need you to continue building on that success, preparing them for the fight today and the long hard fight for their future. They need your skill. They need your experience.”

The 101st in April 2003 captured and took responsibility for Mosul, Iraq’s second largest city, during America’s initial invasion at the beginning of Operation Iraqi Freedom. The division’s upcoming deployment will be its first return to Iraq since it completed its second rotation there at the end of 2006.

Mosul, which Islamic State militants have held since May 2014, will be attacked from the north by peshmerga forces, while a force made up of the Iraqi army and Counterterrorism Service – its elite special operations unit primarily responsible for the recent liberation of Ramadi – will attack from the south, Carter said. Removing the Islamic State group from its “power bases” in Mosul and Raqqa, Syria, will greatly aid in eliminating the terror organization from other parts of the world, including North Africa and Afghanistan, where it has gained influence in the last year.

But Carter told the soldiers to expect a long fight that could include setbacks.

“Reaching and retaking Mosul will not be easy, and it will not be quick,” he said. “There will be many engagements in between … but as our success in Ramadi and north and central Iraq has shown training, advising, and assisting, rather than trying to substitute entirely for local forces is the right approach.”

Outside of its stronghold in Iraq and Syria, the Islamic State group is “continually evolving, changing focus and shifting location,” Carter said, and he vowed the United States would do more to increase the fight in places such as Afghanistan and Libya, where the organization has grown.

“That’s why the Defense Department is organizing a new way to leverage the security infrastructure we’ve already established in Afghanistan, the Middle East, East Africa, and southern Europe into a network to counter transnational and transregional threats like” the Islamic State group, Carter said, indicating the potential for more airstrikes and raids against terror networks.

Carter was expected to meet Thursday with top generals in the anti-Islamic State war including Army Gens. Lloyd Austin, commander of U.S. Central Command, and Joseph Votel, commander of U.S. Special Operations Command, at MacDill Air Force Base in Florida to discuss the continued increase of operations against the militant organization.

Carter also will meet next week with military chiefs from other key coalition nations in Paris, where he is expected repeat his recent calls for more countries – including Arab allies – to contribute more to defeating the Islamic State.

He said Wednesday he has asked other countries to provide more weaponry, trainers, special operators and fighter and reconnaissance aircraft to the coalition’s efforts.

November was the coalition’s busiest month of airstrikes since it began operations in June 2014, with a nearly equally active December, when more than 3,100 munitions were dropped on targets in Iraq and Syria, according to Pentagon statistics.

Meanwhile, Carter acknowledged for the first time on Wednesday that previously announced special operation forces were in place in Iraq and Syria.

Though he declined to provide specifics, Carter said American special operations troops “bring a unique set of capabilities that make them force multipliers – such as intelligence gathering, targeting, and the ability to provide advice and assistance or accompany local forces to the front lines, and help make them victorious.”

In Syria, the small group of the “most elite U.S. special operations forces” has been working hand-in-hand with U.S.-backed rebel groups who have recently pushed the Islamic State out of hundreds of kilometers of northern and western Syria, Carter said.

The addition of the special operation forces along with the uptick in airstrikes, Carter said, is straining the Islamic State organization in Iraq and Syria.

It has “become apparent that the additional military steps that President [Barack] Obama approved in the fall are generating significant momentum across the battlefield in Iraq and Syria,” Carter said. “Moreover, we can see that our actions to accelerate the campaign are having an effect, and creating opportunities to do even more.

“We are taking ground back from the enemy and gaining openings to take more.”