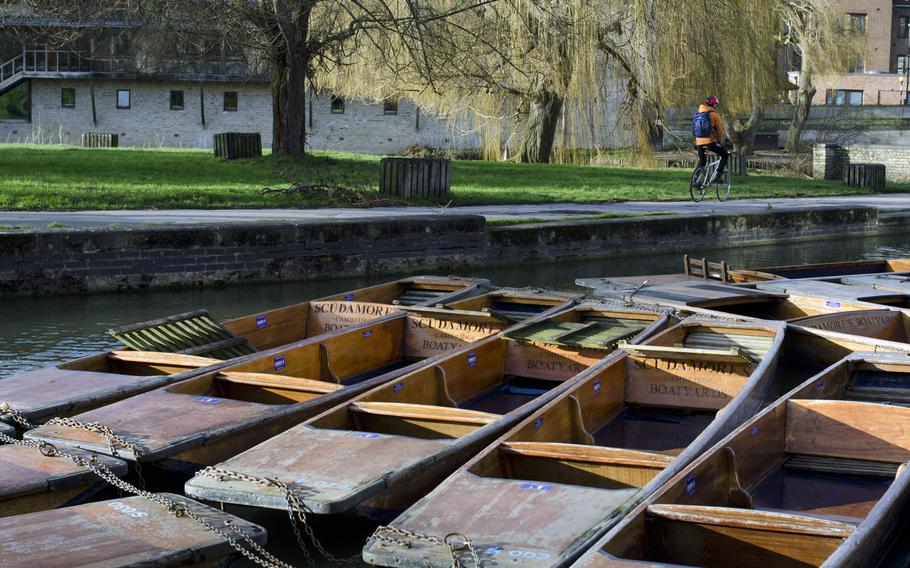 Boats belonging to Scudamore's Punting Co. wait in the river for passengers at the company's boatyard in Cambridge, England, in early January. The company offers tourists the opportunity to be poled down the river or to rent a boat for private use. (Adam L. Mathis/Stars and Stripes)

Boats belonging to Scudamore's Punting Co. wait in the river for passengers at the company's boatyard in Cambridge, England, in early January. The company offers tourists the opportunity to be poled down the river or to rent a boat for private use. (Adam L. Mathis/Stars and Stripes) 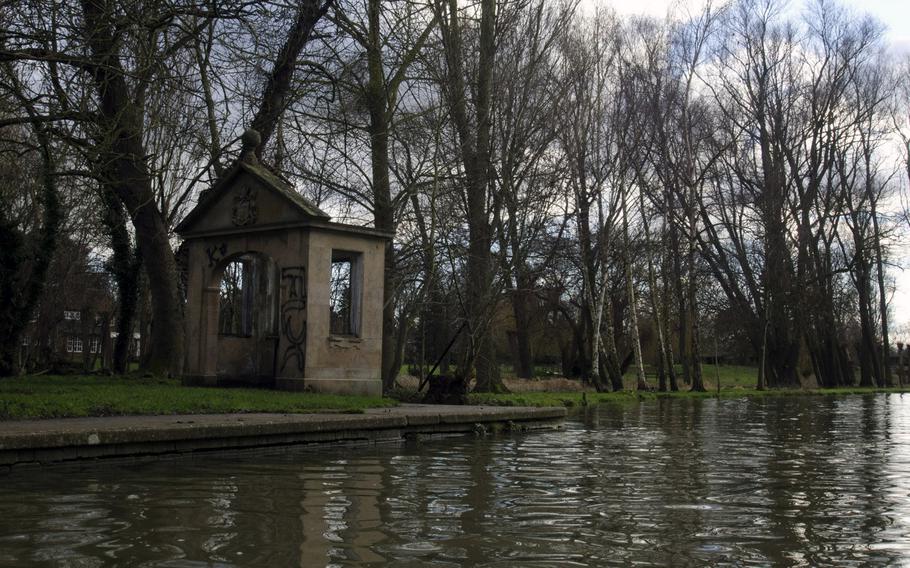 Graffiti marks a structure tourists are taken past on the boat tour offered by the Scudamore's Punting Co. in Cambridge, England, in early January. The tour offers passengers views of ducks and trees along the banks of the river. (Adam L. Mathis/Stars and Stripes) 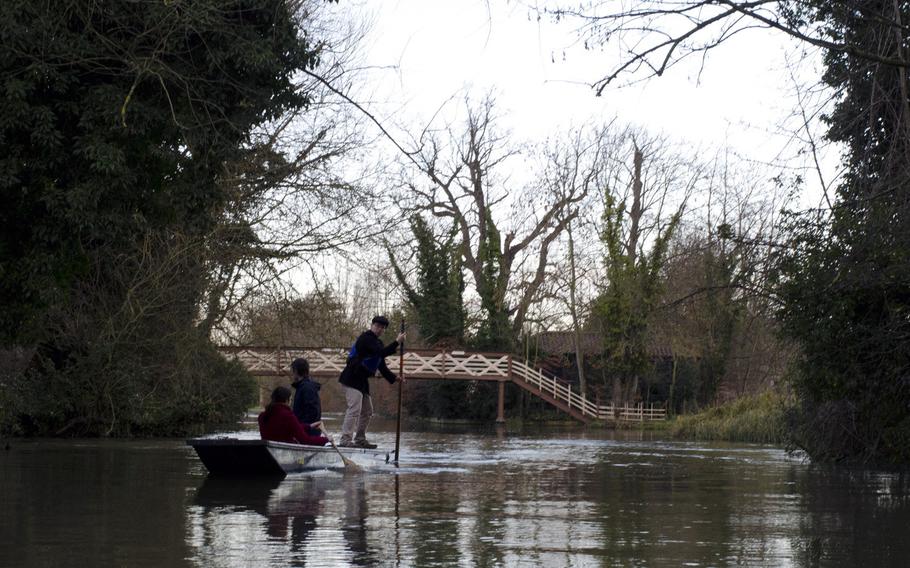 A punter takes his boat down a river in Cambridge, England, in early January. This portion of the river is used by Scudamore's Punting Co. while some of the city's famous colleges undergo maintenance. (Adam L. Mathis/Stars and Stripes) Part of the Grantchester Tour offered by Scudamore's Punting Co., passengers are taken in early January past the company's boat workshop in Cambridge, England. (Adam L. Mathis/Stars and Stripes) Ducks swim by a boat during a tour offered by Scudamore's Punting Co. in Cambridge, England, in early January. The tour offers passengers a peek at what nature has to offer in Cambridge. (Adam L. Mathis/Stars and Stripes)

I was not inspired with confidence when my tour guide warned us to not ask him any questions.

To be fair, he said it jokingly, but only after I had paid 12 British pounds to Scudamore’s Punting Co. for a boat tour in Cambridge. And while he was affable, and actually willing to take our questions, this joke sadly had more than a grain of truth to it.

He knew nothing about what he was showing us during the approximately 45-minute tour.

This was not entirely my guide’s fault. He explained that the colleges were undergoing work, and that the river he would normally have poled us down, which offers views of the backs of the college buildings, was closed while silt was removed from the water.

If only the website that took my money had been as forthright. It mentions maintenance to the colleges, but says, “Guided punts in place of College Backs tours and boat hire services run towards Grantchester from our boatyard between the 6th January and 19th January 2014.”

The tour that I got, however, could hardly be classified as “guided.” We floated down the river past trees, a few ducks and the occasional fisherman while my guide offered virtually no insight into Cambridge’s history or culture. He was amiable and talked to us, but freely confessed his ignorance about the scenery we were sailing past.

As we approached another boat that was presumably from the same company, our guide told us — as though sharing a funny story — that the man poling the boat had researched this stretch of water when he learned the section of river by the colleges had been closed. We could even hear the other guide telling his boat about a nearby bridge.

“Why didn’t you research this?” is what I should have asked my guide, but didn’t.

Instead, I took my concerns to Scudamore’s. My guide was not at fault, the company wrote in an email response, since I was given the Grantchester Tour, which “offers a chauffeured experience without a running commentary through magical woodland and meadows.”

The reason Scudamore’s continues operating tours while the college backs are closed, which happens every other year, is that tickets are not purchased for a particular date but are good for a single trip anytime for six months, the email said.

Visitors to Cambridge usually buy tickets “in advance rather than on the day by our customers,” Scudamore’s wrote. “This means that it would be highly unhelpful to 99 percent of our customer base if we were to stop selling tickets for 2 weeks in January once every 2 years.”

The notice that was on the website when I bought my College Backs ticket indicated there was maintenance going on, but it did not tell me I was getting a boat ride without commentary.

While Scudamore’s gave me two free tickets in compensation, that would be little help to someone who was visiting England on a tight schedule.

Scudamore’s is a well-reviewed company, having 104 top ratings out of 154 on tripadvisor.co.uk, but it is not without competition. It might be worth shopping around.

DIRECTIONS: Scudamore’s Punting Co. has a couple of locations for ticket purchases and boarding boats. The Grand Arcade shopping center is relatively close to all of the sites and is a stop on Cambridge’s Park and Ride system.

TIMES: Contingent upon the weather, Scudamore’s offers tours every day but Christmas. Hours are from 9 a.m. until dusk.

The company’s website, scudamores.com, takes reservations for tickets, which can be used for up to six months after the purchase date. The ticket does not guarantee a specific time or date, so there may be a waiting period when you show up for your tour.

COSTS: Scudamore’s offers a variety of tours. The College Backs tour costs 12.50 British pounds (about $20) for an adult ticket online. The same ticket costs 16.5 British pounds if you purchase on site.

FOOD: Cambridge has a variety of restaurants and lively cafes befitting a university city.