Cafe D-13 near Yokota in former US military housing 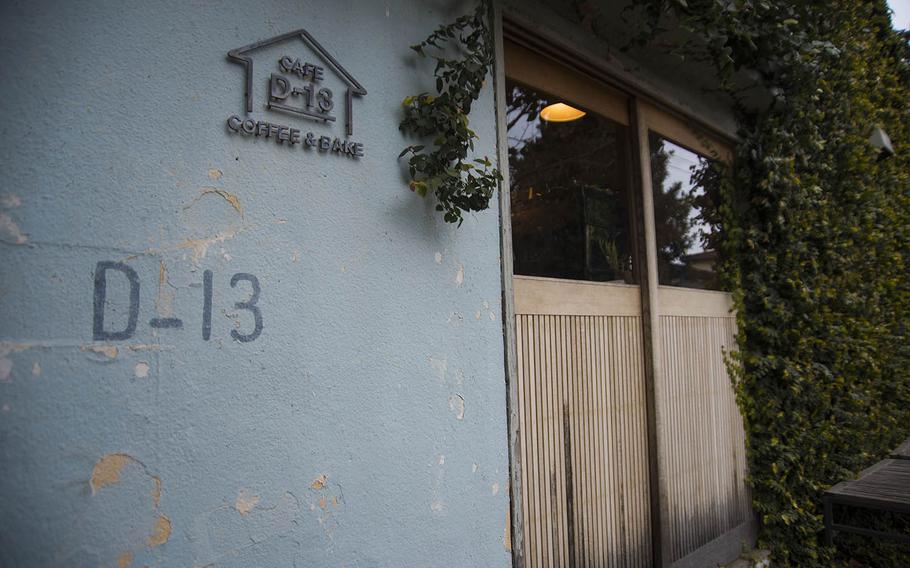 Buy Photo
The quaint Cafe D-13 opened about three years ago inside a former U.S. military house near Yokota Air Base, Japan. (Theron Godbold/Stars and Stripes)

Buy Photo
The quaint Cafe D-13 opened about three years ago inside a former U.S. military house near Yokota Air Base, Japan. (Theron Godbold/Stars and Stripes) 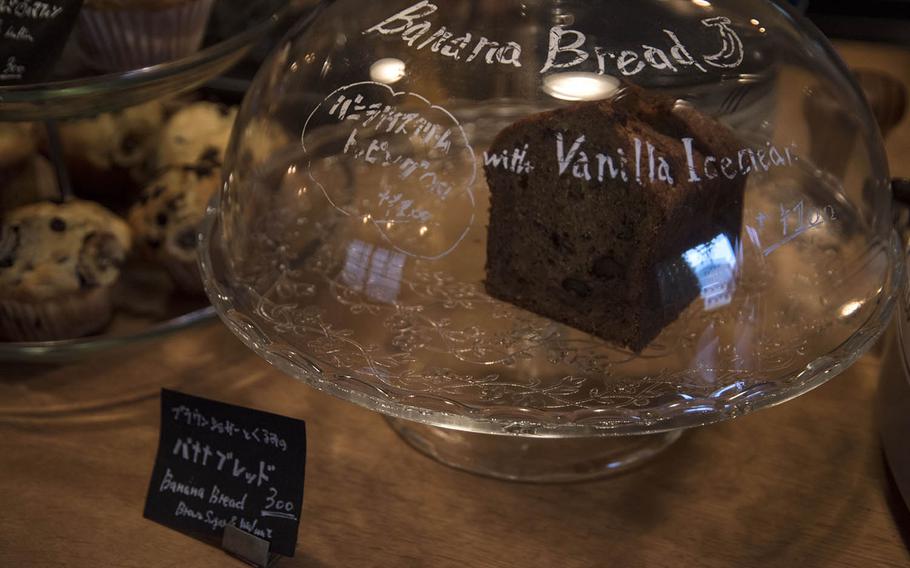 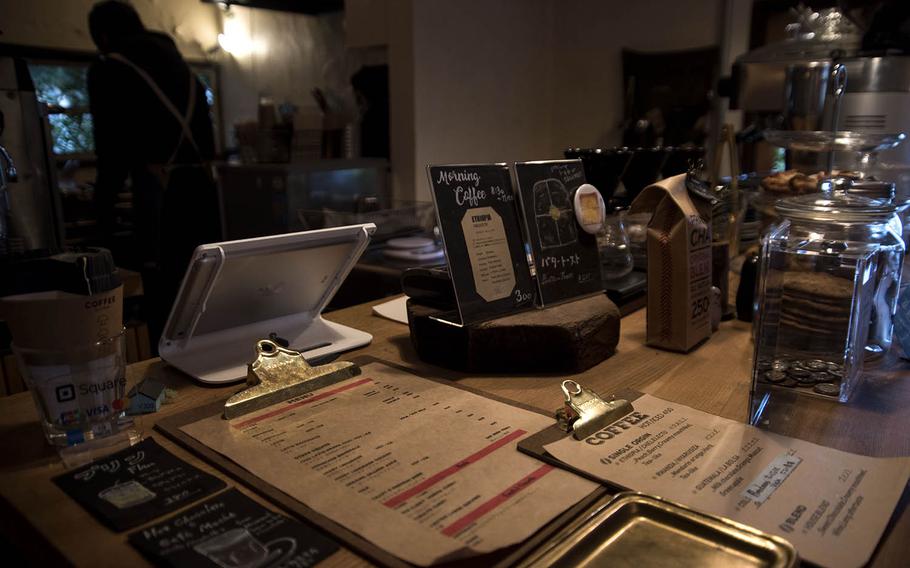 Buy Photo
For three years, Cafe D-13 has been serving an assortment of coffees, baked goods and curries. The prices are modest in comparison to some chain coffee houses. (Theron Godbold/Stars and Stripes) 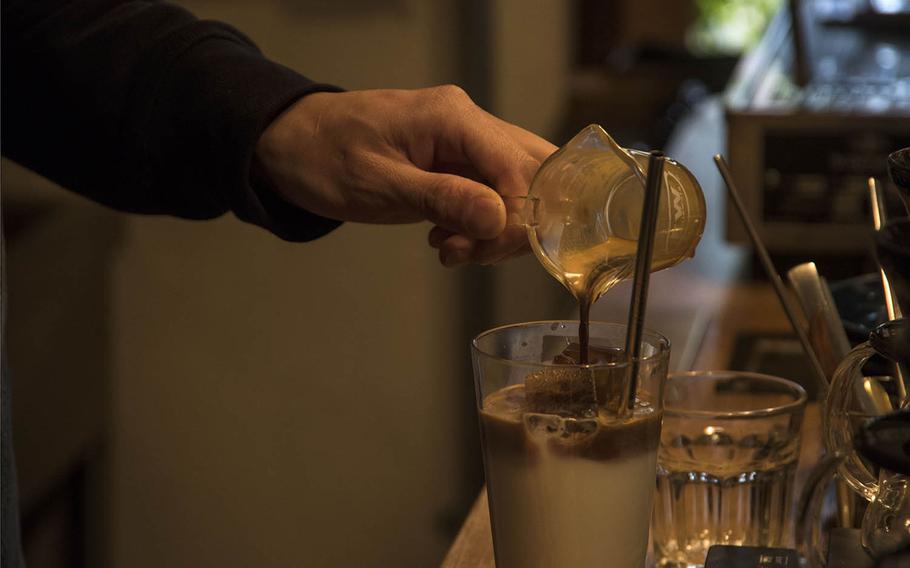 Buy Photo
The barista at Cafe D-13 near Yokota Air Base, Japan, mixes a double shot of espresso into milk, making a latte on Jan. 22, 2020. (Theron Godbold/Stars and Stripes)

Just a five-minute walk from the main gate of Yokota Air Base in western Tokyo, you’ll find a relaxing little coffee shop inside what used to house a U.S. military family.

Cafe D-13 is nestled, almost hidden, from the bustle of Route 16, a major thoroughfare that parallels the base. With an almost bohemian air, the cafe atmosphere will lull you into a comfortable state of mind.

Keep an eye open for the small wooden sign on the side of Waratsuke Avenue just off Route 165 that dead-ends into Route 16 and Yokota’s main gate. The sign directs you to the vine-covered building that is Cafe D-13.

The cafe smells like coffee and patchouli and feels more like a cozy reading nook than a business. It boasts a relaxed vibe with soft jazz in the background, but not the kind you hear at your dentist’s office.

For three years, Cafe D-13 has been serving an assortment of coffees, baked goods and curries. The prices are modest in comparison to some chain coffee houses and range from about $3 for an Americano to about $5 for a honey lemonade. The three drinks — an Americano, latte and espresso — chocolate chip cookie and banana bread that my co-worker and I had set us back 1,850 yen, or about $17.

The espresso (300 yen for a single; 400 yen for a double) had an almost citrus taste to it and wasn’t as strong as those you’ll find in Europe. Unfortunately, it resembled Japanese vending-machine espresso in a can.

The 400-yen Americano, on the other hand, had a subtle taste that wasn’t overpowering and made for a good cup of joe.

My colleague called his iced latte with a double shot of espresso “standard but good,” and was happy it wasn’t too milky like many other lattes served in the area.

Other drinks on the menu include filter coffee, latte macchiato and chai latte.

The banana bread — moist and firm with a hint of cinnamon — proved to be a dense and flavorful complement to my morning coffee. Hungry folks may want to order multiple slices because the portions are kind of small.

The chocolate chip cookie had a consistency more like a biscotti, toasted and crunchy, but I imagine dipping it in a latte would loosen it up and add a lot to this tasty treat.

The small food menu lists two curries for 800 yen — one varies daily while the other is a set dish of keema curry. Another 100 yen will get you an extra-large serving. The baked goods also vary daily with a variety of pricing and flavors.

Cafe D-13 reminded me of my misspent youth in Austin, Texas, talking into the early morning hyped up on caffeine with friends about the most important of youthful subjects. Because of that, I look forward to visiting again and trying to reclaim some of those memories in a new time and place.

Directions: From Yokota Air Base’s main gate, cross Route 16 and continue straight to the first light. Turn right and look for a small wooden sign marking the entrance to the cafe. Limited parking is available.