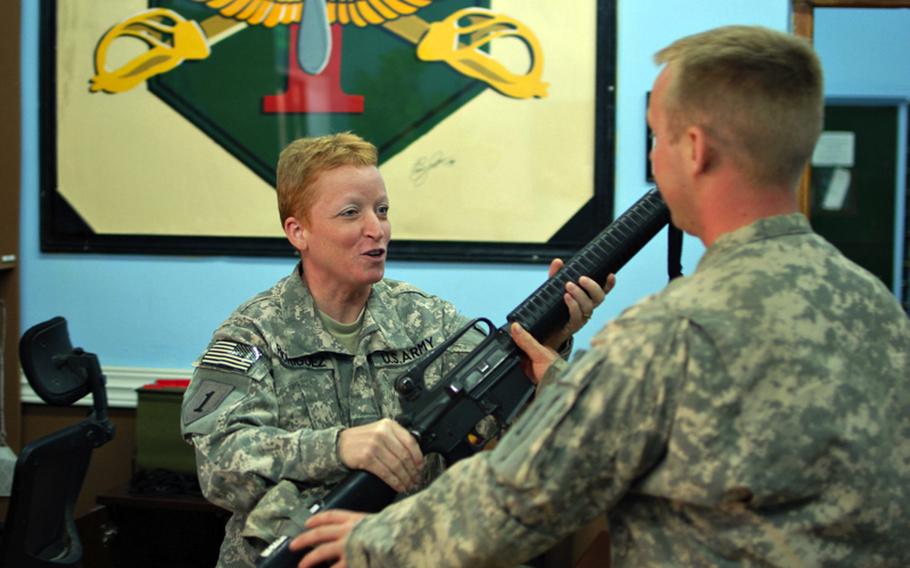 Spc. Wendy Rodriguez, who works at the Warrior Resiliency Campus on Camp Taji, Iraq, returns a weapon to a soldier after his visit to the campus on Friday. (Roland Hale/U.S. Army)

Spc. Wendy Rodriguez, who works at the Warrior Resiliency Campus on Camp Taji, Iraq, returns a weapon to a soldier after his visit to the campus on Friday. (Roland Hale/U.S. Army) 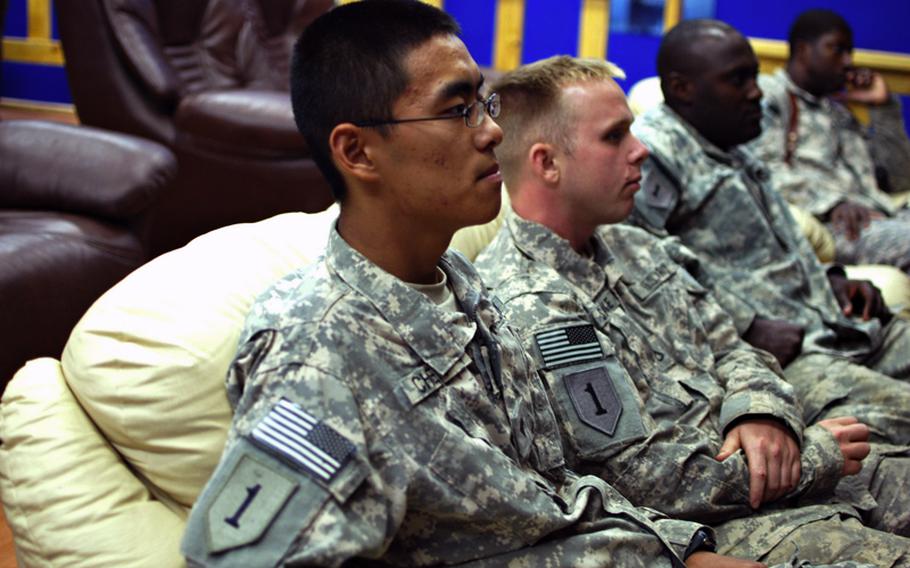 A former prisoner of war, Brig. Gen. Rhonda Cornum is now director of the Comprehensive Soldier Fitness program. Here, she speaks before a Master Resilience Training course at Fort Meade, Md. (Courtesy of the U.S. Army) Buy Photo
A roadside bomb in Afghanistan wounded Sgt. 1st Class John Finn and killed his bomb-sniffing dog five months ago. Finn recently finished a 10-day course, along with some 80 sergeants in Grafenwohr, learning the Army's emotional resilience-building techniques. "Resiliency - it's reshaping. I used to be more outgoing and relaxed ... if it can re-mold me, I'm definitely sold," he said on the first day of the training. (Nancy Montgomery/Stars and Stripes) 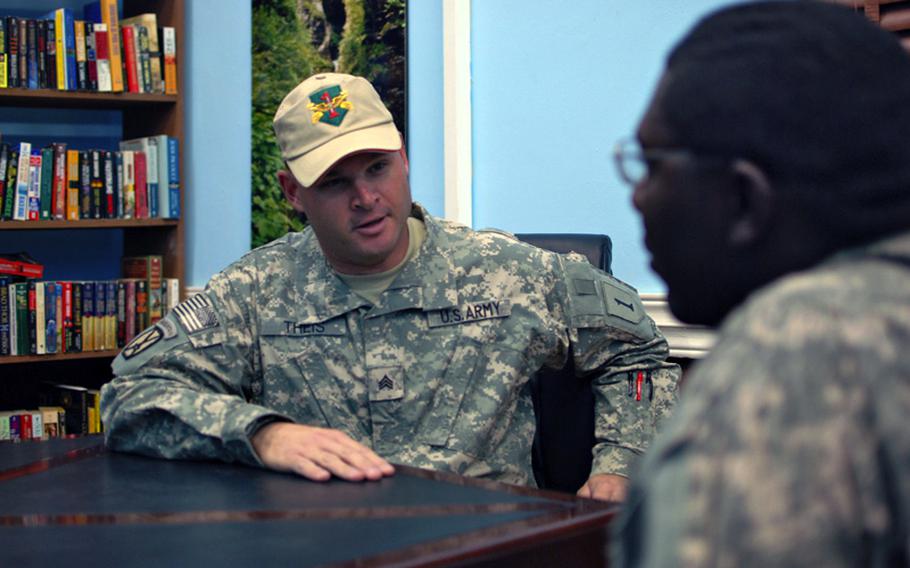 Sgt. David Theis, who works at the Taji Warrior Resiliency Campus on Camp Taji, Iraq, talks with a soldier in the campus's library on Friday. Nearly 2,500 soldiers have used the center since it opened. (Roland Hale/U.S. Army)

GRAFENW&Ouml;HR, Germany -- He&rsquo;s a wounded warrior, just five months past an IED blast that tore through both knees and a shoulder and killed the bomb-sniffing dog he was on patrol with in Afghanistan.

His losses have changed him, said Sgt. 1st Class John Finn. He limps. He&rsquo;s more withdrawn, he said, and gets angry &ldquo;over the dumbest things.&rdquo;

He&rsquo;s a smoker now &mdash; started on a previous deployment, after one rocket-propelled grenade fired at his truck and another lodged, unexploded, inside.

He feels bad he&rsquo;s not in Afghanistan, forced off the front by his injuries.

&ldquo;You&rsquo;re like a broken piece of equipment, you&rsquo;re set aside,&rdquo; he said.

Now, instead of patrolling dangerous areas and leading soldiers in the fight, Finn has been attending classes to learn the concepts and techniques of positive psychology, or as the Army calls it, &ldquo;Comprehensive Soldier Fitness.&rdquo;

The 36-year-old scout out of Schweinfurt, Germany, was one of nearly 80 sergeants in Grafenw&ouml;hr this month learning to become a Master Resilience Trainer, someone who helps soldiers become more psychologically resilient &mdash; and perhaps, better equipped to handle difficulties much like the ones he was experiencing.

It&rsquo;s the first time the training has been done in U.S. Army Europe, although the command had sent about 45 people, about five a month, for the training at the University of Pennsylvania.

Finn was optimistic: &ldquo;Resiliency &mdash; it&rsquo;s reshaping. If it can re-mold me, I&rsquo;m definitely sold.&rdquo;

Finn&rsquo;s situation underscores the Army&rsquo;s struggle to meet soldiers&rsquo; psychological needs after years of war and repeated deployments. While the Army tries to move away from a stoic warrior ethos, its efforts to destigmatize counseling and provide more counselors still have a long way to go.

Finn tried counseling. He walked over to the mental health clinic one day, after his wife had told him he&rsquo;d changed. He&rsquo;d had to force himself to go. &ldquo;It&rsquo;s embarrassing,&rdquo; he said.

&ldquo;I went to mental health and they told me they were overbooked,&rdquo; he said. &ldquo;I&rsquo;ll never go back there again.&rdquo;

Since then, he said, he&rsquo;s been coping on his own. His symptoms are consistent with mild combat stress, &ldquo;expected and predictable emotional, intellectual, physical, and/or behavioral reactions from exposure to stressful events,&rdquo; according to the U.S. Army Medical Department Behavioral Health.

But he could use a little help, according to his scores on the Comprehensive Soldier Fitness questionnaire that measures well-being in physical, emotional, social, family and spiritual areas.

That wouldn&rsquo;t make him any less likely to benefit from the training and to pass along his knowledge to younger troops, said Brig. Gen. Rhonda Cornum, the program&rsquo;s director.

A 2009 Army Posture statement said the training &ldquo;can decrease post-traumatic stress, decrease the incidence of undesirable and destructive behaviors, and lead to a greater likelihood for post-adversity growth and success.&rdquo;

But Cornum said in an e-mail this week that the intent of Comprehensive Soldier Fitness &ldquo;is not to prevent post combat stress reactions, PTSD, suicide, divorce, or any other specific behavioral or relationship problem.&rdquo;

Instead, she wrote, &ldquo;The intent of CSF is to provide preventive training that will help people successfully negotiate these and other challenges, including combat experiences. The skills can not only be applied in the training and combat environments, but also at home with family members and friends.&rdquo;

It&rsquo;s unclear how that kind of success would be measured. Overall, the efficacy of the resiliency training, tested mostly in middle-schoolers, remains unproven in soldiers.

&ldquo;It takes a couple of years to see if something &ldquo;works,&rdquo; Cornum said. &ldquo;But the feedback is overwhelmingly positive. Anybody who&rsquo;s had any wants more.&rdquo;

So far, more than 840,000 soldiers have taken the CSF confidential on-line mental health assessment, Cornum said, and, based on their scores, are then referred to confidential computer-training.

More than 2,000 sergeants and others have received comprehensive training to then offer it to younger soldiers. &ldquo;By this time next year, there&rsquo;ll be more than 6,000&rdquo; trained, she said.

The $117 million program, developed at the University of Pennsylvania, teaches people a variety of cognitive and problem-solving skills. It is supposed to help them not &ldquo;catastrophize&rdquo; events such as thinking one&rsquo;s girlfriend is cheating because she didn&rsquo;t answer the phone one day and to stop obsessively brooding about the worst that could happen; to think that &ldquo;challenges&rdquo; are temporary and can be changed; to examine &ldquo;icebergs&rdquo; or subconscious beliefs that impede relationships and decision-making; to consciously seek out the good, and to cultivate gratitude.

Cornum, who spoke to the Grafenw&ouml;hr group on the first day of training, provided an example from her own life. She was severely injured and held captive during the Gulf War after her medevac helicopter was shot down in Iraq.

&ldquo;The guy&rsquo;s got a gun to the back of my head,&rdquo; she said. &ldquo;I&rsquo;m kneeling there and I&rsquo;m having a hard time thinking of something good.&rdquo; Then, she said, she thought: &ldquo;Well, at least it won&rsquo;t hurt.&rdquo;

Critics of positive psychology say it can foster a &ldquo;blame the victim&rdquo; mentality in that bad results and negative feelings are an individual&rsquo;s responsibility &mdash; they weren&rsquo;t positive enough. The program has also been criticized for use with soldiers, since it isn&rsquo;t meant to deal with the trauma of combat.

But Cornum and other Army officials say that many of the stresses on soldiers have little to do with combat. A recent study on Army suicides found that 79 percent of soldiers who took their own lives had deployed only once or had not deployed.

The focus of the training is on the younger, less experienced soldiers.

Sergeants are given the intensive training so that they can bring it back to their units and teach it to younger soldiers. Drill sergeants are learning it to provide it to new recruits in basic training.

According to Cornum and others, the younger soldiers stand to most benefit. So far, Comprehensive Soldier Fitness scores are similar for all ages and ranks, Cornum said, but &ldquo;immaturity was even a bigger risk factor&rdquo; for bad outcomes.

The rate of privates with a positive drug urinalysis, for example, is almost 10 times higher than all others, Cornum said.

Overall, she said, the scores show that soldiers, on average, are more psychosocially robust than the general population &ndash; a function, she said, of pre-enlistment screening that usually keeps out people who suffer from diseases like schizophrenia, obsessive-compulsive disorders and personality disorders.

At the same time, she said, younger soldiers have fewer coping tools than they did a generation or two ago. Some 30 percent join without ever having gotten their drivers&rsquo; license, she said. &ldquo;Their problem-solving technique is calling Dad.&rdquo;

Furthermore, she said, it&rsquo;s not surprising that Army suicide and PTSD rates are higher now, with the country at war for nine years and so much demanded of soldiers.

Among the training&rsquo;s teachers at Grafenw&ouml;hr was Staff Sgt. Christopher Brown, from Fort Hood, Texas, who said his own training last year had helped him become more aware of his thoughts, and to slow down when he deals with soldiers. In one case, when he had a soldier sent to his unit as a &ldquo;disciplinary transfer,&rdquo; it helped him deal with her more fairly. &ldquo;It allowed me not to pass judgment and give her a fresh start,&rdquo; he said. &ldquo;She&rsquo;s doing fine now.&rdquo;

Finn said he believes everyone in the military should go through the resiliency training.

&ldquo;It will take time, though,&rdquo; he wrote in an e-mail this week after finishing the 10-day course. &ldquo;Nothing ever gets fixed properly overnight, and the military needs to realize ... that soldiers are not pieces of equipment and if you can avoid them getting broke, then as soldiers, sailors, Marines and airmen, we will only grow stronger.&rdquo;