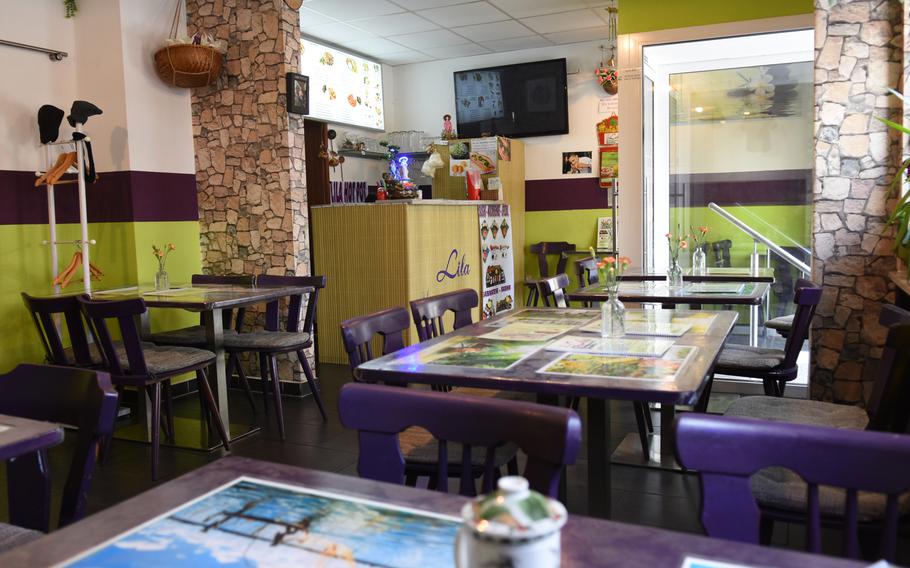 Buy Photo
The inside of Lila South Vietnamese Specialties, a restaurant in downtown Kaiserslautern, Germany, is small but cheerful and clean, with freshly-cut flowers and Asian decor brightening the cozy dining room. (Jennifer H. Svan/Stars and Stripes)

Buy Photo
The inside of Lila South Vietnamese Specialties, a restaurant in downtown Kaiserslautern, Germany, is small but cheerful and clean, with freshly-cut flowers and Asian decor brightening the cozy dining room. (Jennifer H. Svan/Stars and Stripes) 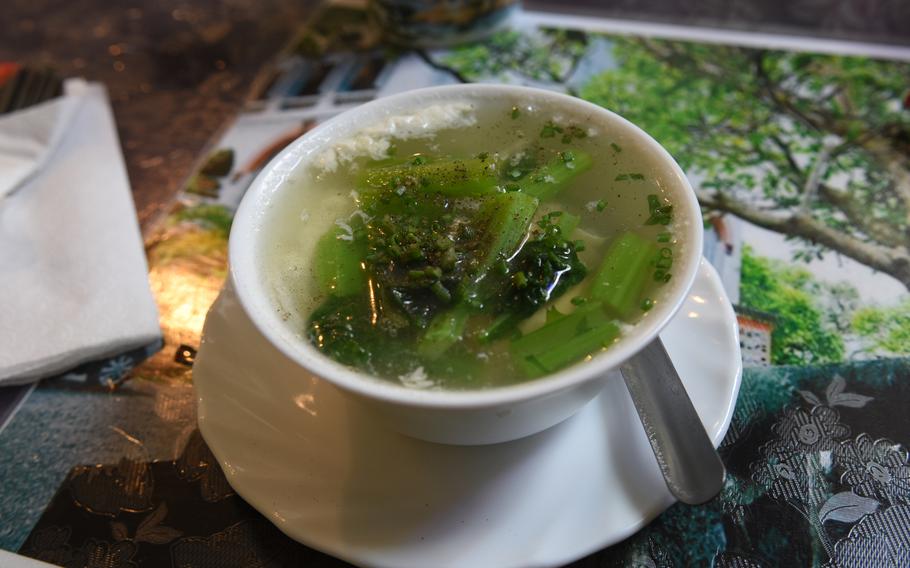 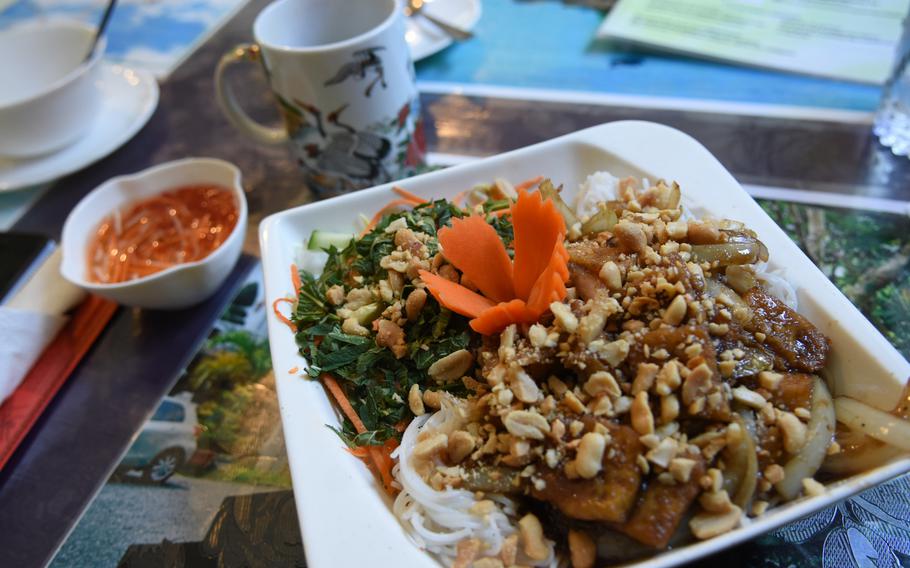 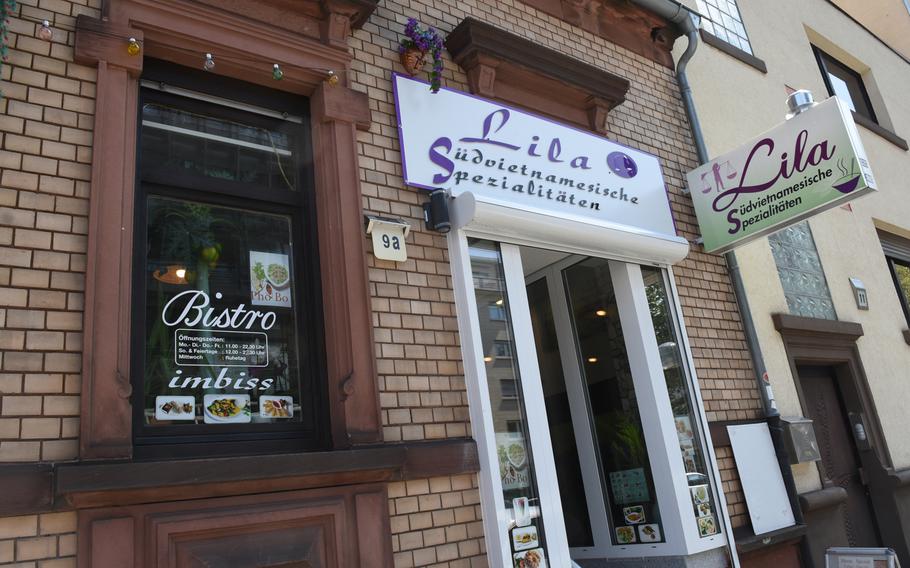 Buy Photo
Lila South Vietnamese Specialties opened in October 2015, specializing in home-cooked, authentic southern Vietnamese dishes. The bistro is down the street from the K in Lautern mall in Kaiserslautern, Germany. (Jennifer H. Svan/Stars and Stripes) 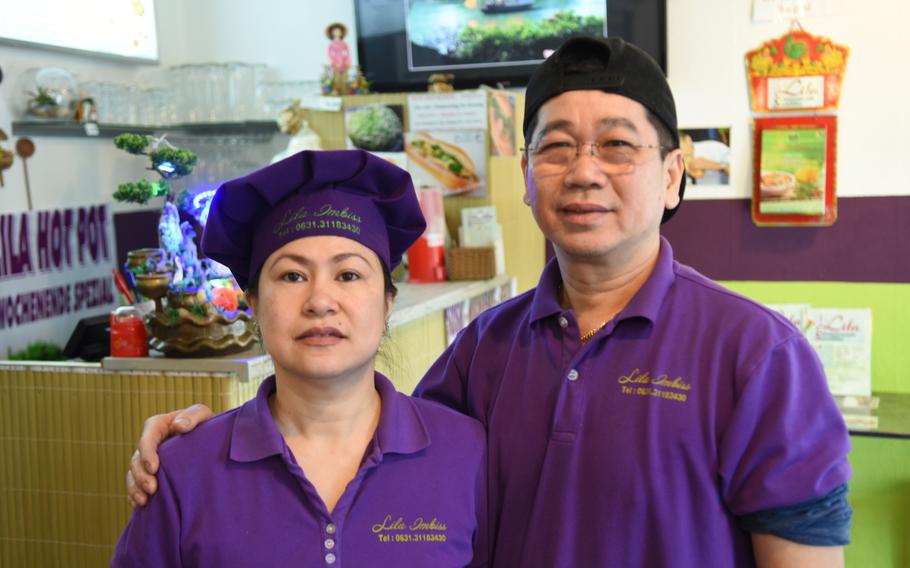 From its family-run kitchen to emphasis on traditional recipes, Lila appears to have the right ingredients to back Hoa Hiep Nguyen’s bold claim that his downtown bistro serves up the most authentic Vietnamese food in town.

The restaurant specializes in southern Vietnamese cuisine, and both Nguyen and his wife, Thi My Hanh, share cooking duties with Nguyen’s uncle. They’re from the region, where they grew up on family meals cooked with Vietnamese staples such as rice, noodles, fresh vegetables, marinated meats and herbs.

But though Nguyen is very convincing when he says, “What we eat at home, we cook here,” the food at Lila really does the talking.

I was surprised to learn that Lila has been open since October 2015, having only heard of it recently after a colleague mentioned it. I found it hiding in plain sight a few blocks from the K in Lautern mall.

The restaurant is small, with seating for about two dozen, but it’s clean and bright inside, the decor highlighting the Vietnamese culture and country.

After two hours chatting with the friendly Nguyen and hearing of his harrowing journey to Germany as a refugee after the Vietnam War, I left with a greater appreciation of the food he and his family prepared — and the thought that Lila might be one of the best-kept secrets in Kaiserslautern.

For starters, the canh cai be xanh — or mustard green soup with egg — was delicious. The greens were fresh and crisp, a nice accompaniment to the fully-cooked egg in a clear broth.

I chose the bun bo nam bo for the main course — beef (bo) and noodles, southern Vietnamese style (nam bo). Instead of beef, I opted for a vegetarian version, a substitute that can be made for any meat dish on the menu.

As with the soup, my first impression was how fresh everything tasted. I dug in and had a belly-full before the rice noodles disappeared. The huge mound of noodles served with fresh vegetables and tofu mixed in a savory brown sauce and topped with chopped peanuts could easily feed two people.

It left no room for Lila’s sweet desserts, such as the baked bananas with honey and sesame balls.

Unlike some of Lila’s customers, particularly Vietnamese living in Germany or Vietnamese Americans stationed here with the U.S. military, I had no prior expectations. With no knowledge of what Vietnamese food should taste like, I can’t say whether it’s authentic. I can say, however, that the food was good and fresh and certainly tasted like a home-cooked meal.

The menu at Lila includes a selection of southern Vietnamese dishes, as well as more traditional Asian dishes of grilled meat and fish served with different sauces, such as curry, sweet and sour, peanut and mango. Lila also has a separate sushi menu.

The Nguyens also post on Lila’s Facebook page when special items are available, which typically only last a few days. Recent specials included a dish of grilled pork with thin sheets of steamed rice and the bright green pandan cake, flavored with pandan leaves instead of vanilla, Nguyen said. “That’s how we make it in Vietnam,” he said.

Prices: Main courses start at 6.50 euros (about $7.30). Vietnamese specialty dishes average a little higher, starting from 8.50 euros (about $9.55). Portions are big. Most appetizers and desserts cost less than 5 euros. Takeout available. Cash is the only accepted form of payment.