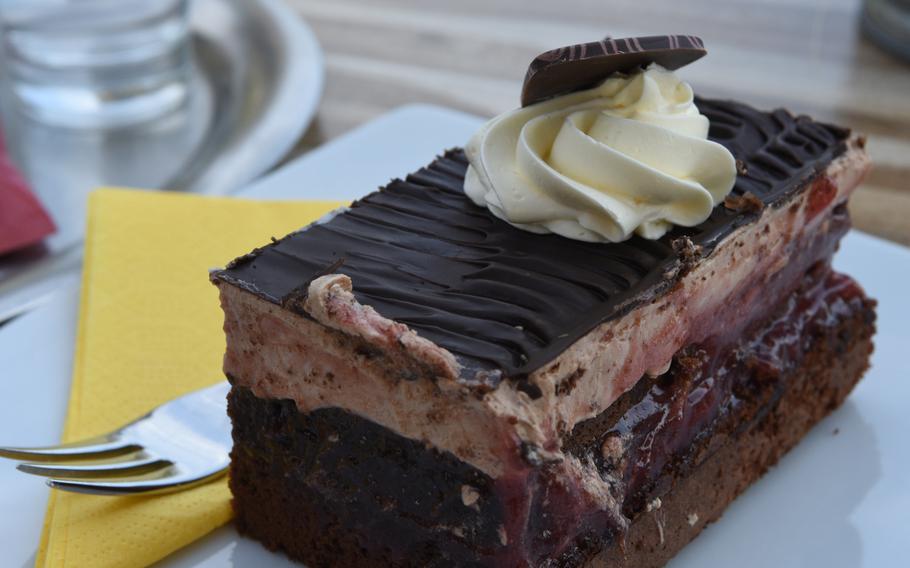 Buy Photo
A layer of cherry filling made this chocolate cake at Bistro Stellwerk in Weilerbach, Germany, decadent. (Jennifer H. Svan/Stars and Stripes)

Buy Photo
A layer of cherry filling made this chocolate cake at Bistro Stellwerk in Weilerbach, Germany, decadent. (Jennifer H. Svan/Stars and Stripes) Buy Photo
The patio outside Bistro Stellwerk in Weilerbach, Germany, is a great place to catch some rays of late summer and early fall. (Jennifer H. Svan/Stars and Stripes) 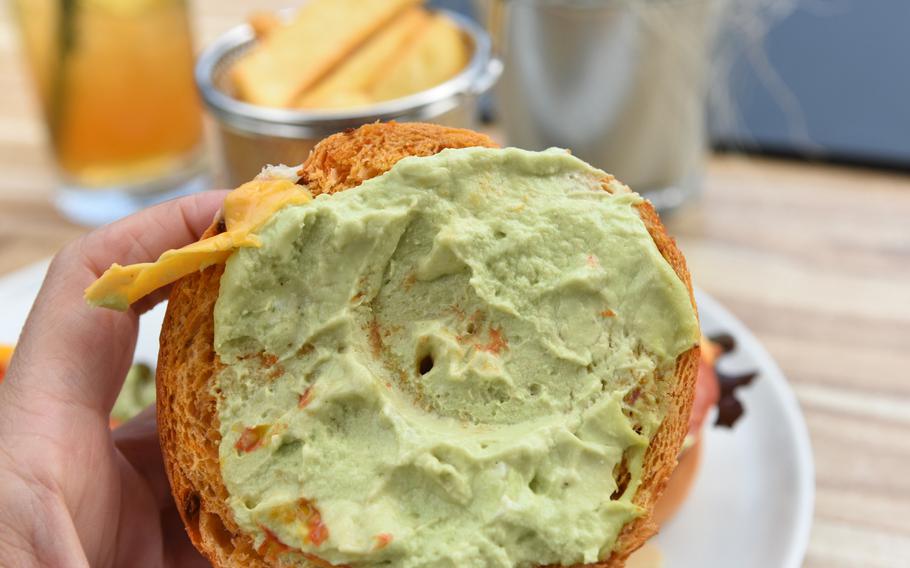 Buy Photo
The veggie burger bun at Bistro Stellwerk in Weilerbach, Germany, is slathered with avocado cream, a nice alternative to mayonnaise or ketchup. (Jennifer H. Svan/Stars and Stripes) Buy Photo
The best part of the veggie burger at Bistro Stellwerk in Weilerbach, Germany, was the hearty bun which held up despite all the toppings. (Jennifer H. Svan/Stars and Stripes) 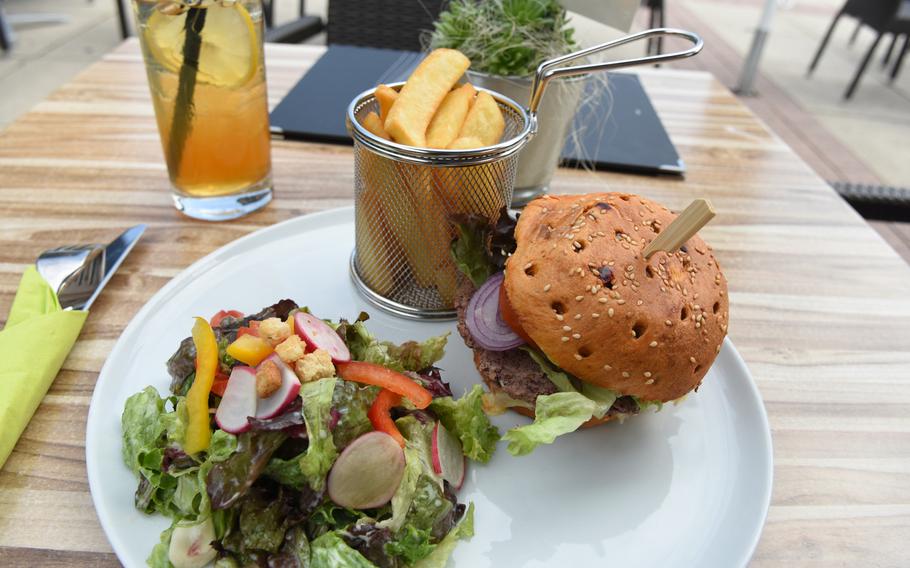 Buy Photo
The veggie burger at Bistro Stellwerk in Weilerbach, Germany, came with a side salad and French fries, all for 8,50 euros (or about $10). (Jennifer H. Svan/Stars and Stripes) Buy Photo
The patio Bistro Stellwerk, a cafe in Weilerbach, Germany, looks onto the village center. Kids can run through the fountains in summertime. (Jennifer H. Svan/Stars and Stripes)

Ordering a veggie burger anywhere — but especially in a land famous for its sausage — can be a roll of the dice.

But at Bistro-Cafe Stellwerk on the outskirts of Kaiserslautern, the gamble paid off with a red-bean patty that didn’t remind me of cardboard, in taste or texture.

The Weilerbach cafe has a compact menu that covers the basics of pizza, pasta, salad, burger and meat dishes. Nothing fancy, but many of the choices are just different enough from those of a typical German restaurant to get excited about.

There’s spaghetti with basil-pesto sauce or a chicken burger with a fried egg. The two choices of pizza come with either salami or arugula. One of the salads is served with goat cheese, honey and walnuts.

Of course, the German staple schnitzel is on the menu, with or without homemade mushroom sauce. But if pork doesn’t tickle your taste buds, the bistro offers a fried chicken breast filet with Mediterranean vegetables and “oven potatoes” with sour cream.

And then there is the veggie burger. Thanks to the option of an English menu, I could see that the burger was made with red beans and came topped with avocado cream, jalapenos, lettuce, tomatoes, cucumber and onions. The English was no help in deciphering what the “crunchy burger bun” was.

But the bread might have been the best part of the meal: It had an orange hue — possibly from sun-dried tomatoes; it tasted fresh and didn’t fall apart, expertly holding together the hefty load of toppings and two types of melted cheese.

I also learned two things from my lunch outing: Avocado cream is a thing. Google it. And always squeeze the top of your straw if wasps are around.

Enjoying the waning warmth of late August on the bistro’s outdoor patio meant putting up with a few pesky wasps, which beelined it for my glass of sweet tea. I shooed them away, no big deal. Then I took a sip and got a mouthful of a wasp that had crawled inside the opaque straw. Somehow, I managed to spit it out before it deployed its stinger.

I suddenly felt darn lucky: Because my mouth wouldn’t be swelling shut, I was able to eat some chocolate cake layered with cherry filling. The bistro also sells a variety of ice cream flavors, 1 euro ($1.20) per scoop.

Besides the standard menu, the cafe offers a few specials. On the day I went, it was salad with salmon or a pancake with Bolognese sauce and mushrooms. The bistro’s summer menu will change sometime in October, a server told me.

Even if you’re not looking for a meal, the cafe is a great place to enjoy a glass of wine or dessert. The cafe’s patio faces the village square, where kids can run through the fountains in the summer months.

Patronizing the bistro is also a way to support an important local organization. The bistro is managed by the Westpfalz workshop, which employs people with disabilities who might not be able to find a job on the open market. Service on the day I went was top-notch.