Birthplace of Chopin, Warsaw is brimming with history, culture in a less-crowded setting A woman and child show their appreciation for a mime who appears to be sitting on air in Warsaw's old market square in Poland. (Jennifer H. Svan/Stars and Stripes)

A woman and child show their appreciation for a mime who appears to be sitting on air in Warsaw's old market square in Poland. (Jennifer H. Svan/Stars and Stripes) Locks line an iron fence by a park in Warsaw, Poland. (Jennifer H. Svan/Stars and Stripes) 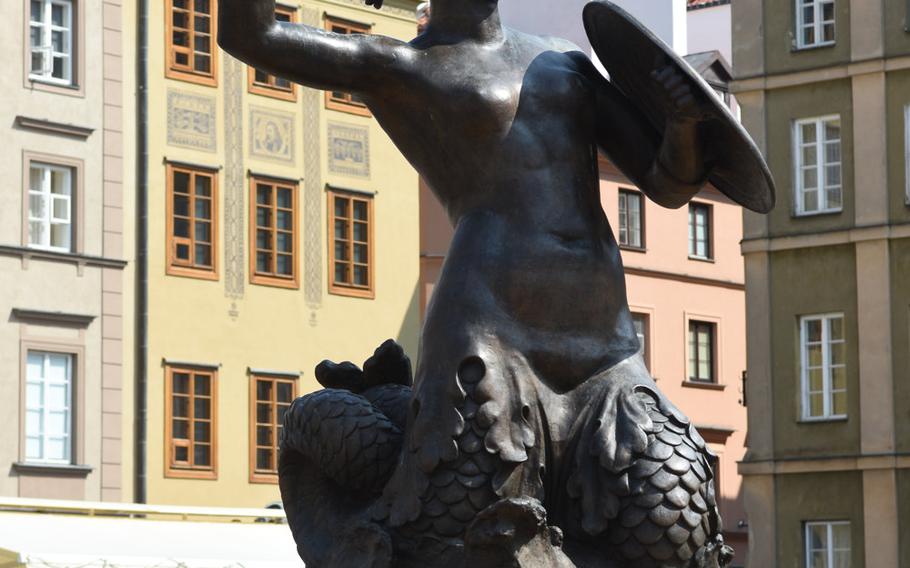 The Mermaid of Warsaw is a famous monument in the old market square in Warsaw, Poland. The mermaid is a symbol of the city. (Jennifer H. Svan/Stars and Stripes) 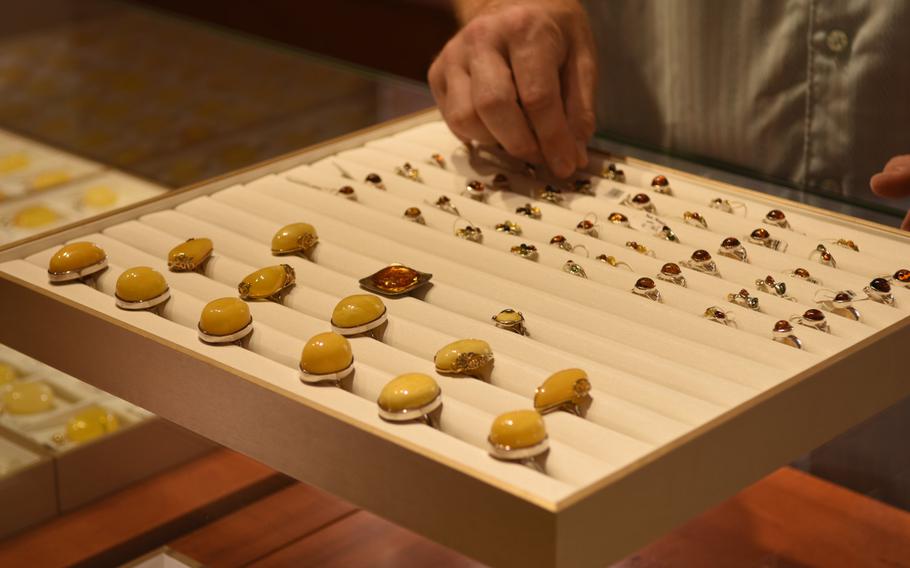 Amber jewelry, such as this display of rings, abounds in Warsaw, Poland, and can be found in many shops. (Jennifer H. Svan/Stars and Stripes) 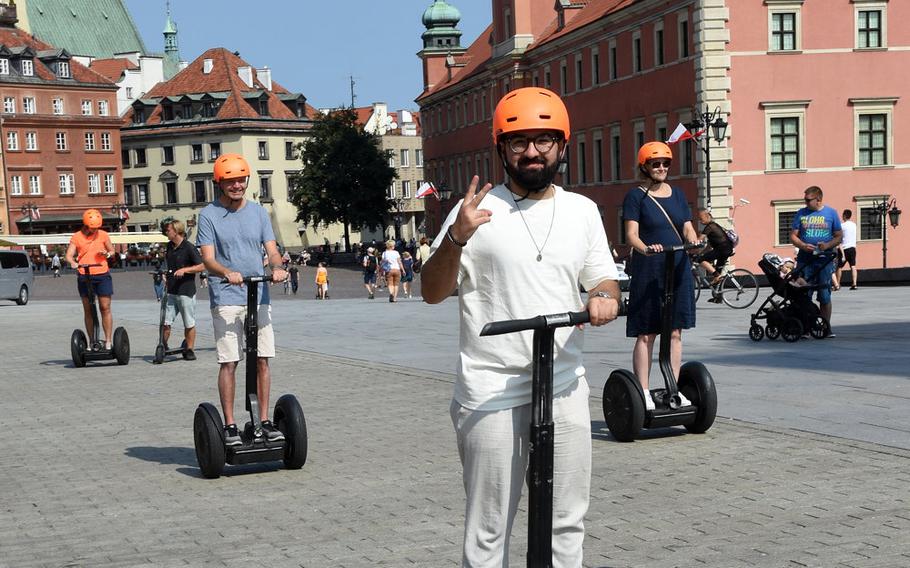 Tourists take a segway tour of Warsaw, Poland, on Sept. 1, 2019. Guided tours in English on bicycles as well as walking tours are also advertised. (Jennifer H. Svan/Stars and Stripes) 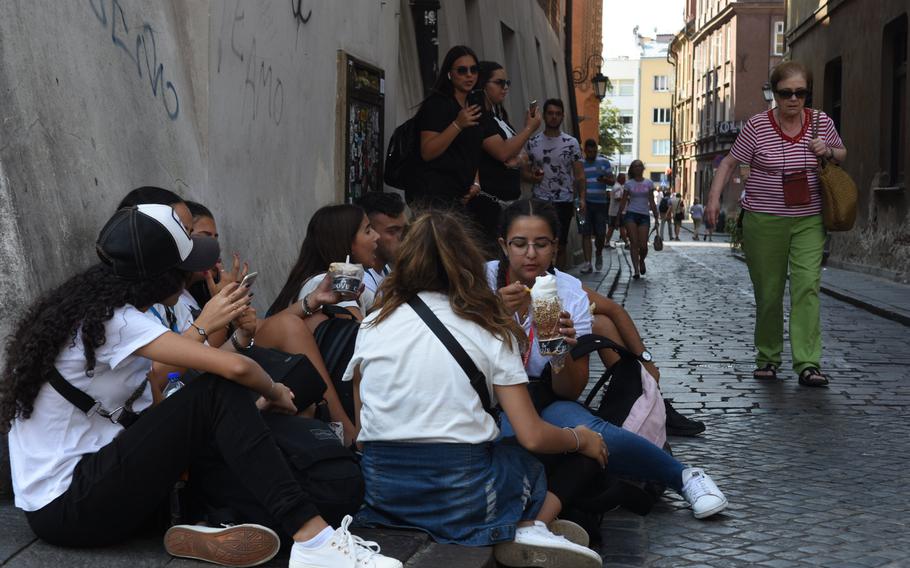 A group of teenagers chat and eat ice cream while sitting on cobblestones in Warsaw, Poland, on Sept. 1, 2019. Soft-serve ice cream is a popular treat in the city. (Jennifer H. Svan/Stars and Stripes)

To be honest, Warsaw was not on my list of cities to see while living in Europe.

I knew a few people who had traveled to Poland and they all went to Krakow, Poland’s most popular tourist destination.

But I packed my bags for Poland’s capital earlier this month for work — and I’m now enchanted by this city that travel guru Rick Steves calls a diamond in the rough.

Steves is right. At first glance, Warsaw is more hardscrabble than polish, communist-era apartment blocks and a palette of gray intermixed with quaint cobblestone lanes and cosmopolitan city blocks.

But while it lacks the fairy-tale feel of a medieval city like Bruges, Warsaw is easy to navigate, with fewer crowds than some of its more famous European counterparts. It offers a wealth of interesting history and architecture, not to mention more bang for your buck when shopping with the Polish zloty.

And it’s only about a two-hour flight from Frankfurt.

Warsaw truly feels like a city that has pulled itself up by the bootstraps, rising from its tragic modern history of wartime destruction and decades of socialist rule to count itself among one of Eastern Europe’s travel destinations.

The Stare Miasto, or old town, was razed by the Nazis in World War II, but the Poles have worked hard to restore the area. The market square, dating back to the 13th century, has been meticulously rebuilt, down to the intricate designs on the pastel-painted merchant houses that face the square. The area is a UNESCO World Heritage site and is still being renovated, judging by the prevalence of scaffolding in the square.

One could spend a day wandering the streets and checking out the shops. You’ll find plenty of Polish pottery, hand-embroidered linens, antiques, keepsake boxes and wooden folk sculptures. Amber jewelry shops abound in the old town. It’s the amber variety from the Baltic Sea region, including Poland’s coastal areas.

Walking the streets of Warsaw, you’ll soon discover — if you didn’t know before — that the city is the birthplace of the composer Fryderyk Chopin. Signs of him are just about everywhere. A guidebook even tells you where you can take selfies next to Chopin statues or landmarks, including the church pillars where Chopin’s heart is said to be buried. Daily Chopin concerts are held around the city. And the Fryderyk Chopin Museum houses the largest collection of Chopin memorabilia in the world, including the Pleyel grand piano, the instrument Chopin played in his final years.

To learn more about one of Poland’s darkest chapters during World War II, check out the Warsaw Rising Museum. It pays tribute to the city’s residents who rose up against the Nazis and died in the ensuing slaughter.

A visit to the Polish Vodka Museum might be a good place to stop afterwards, to lighten one’s mood after such a sobering history lesson.