Bike trail near western Tokyo more about journey than destination 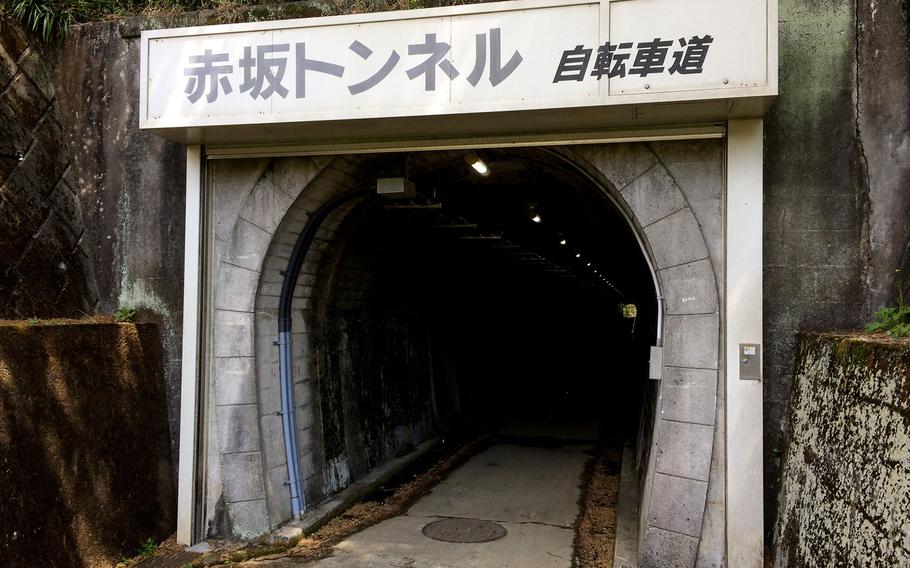 Once light rail tunnels for transporting building materials to a dam, these tunnels now add an exciting change of pace to bicycling trails near Yokota Air Base. (Allen Onstott/Stars and Stripes)

Once light rail tunnels for transporting building materials to a dam, these tunnels now add an exciting change of pace to bicycling trails near Yokota Air Base. (Allen Onstott/Stars and Stripes) 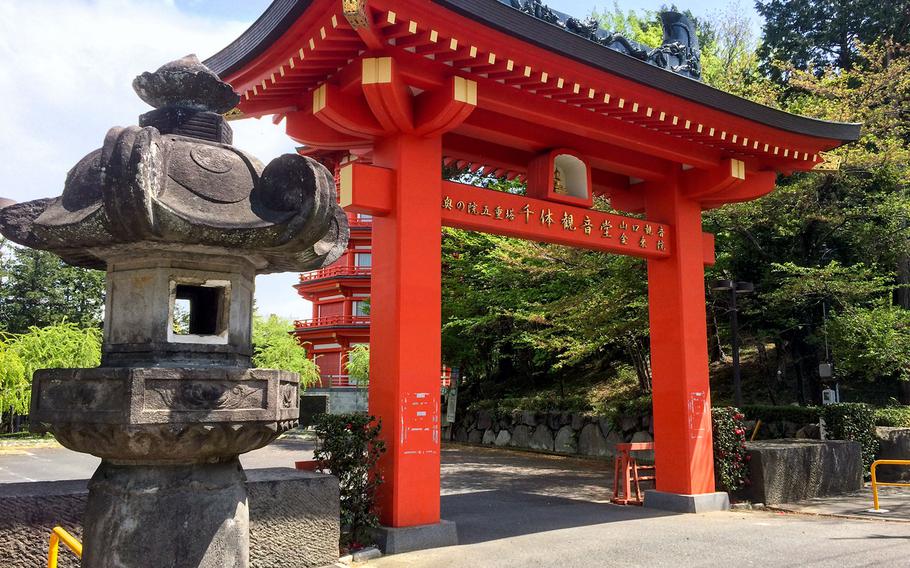 A temple near the Seibu Dome is well worth leaving the bicycle trails to check out. (Allen Onstott/Stars and Stripes) 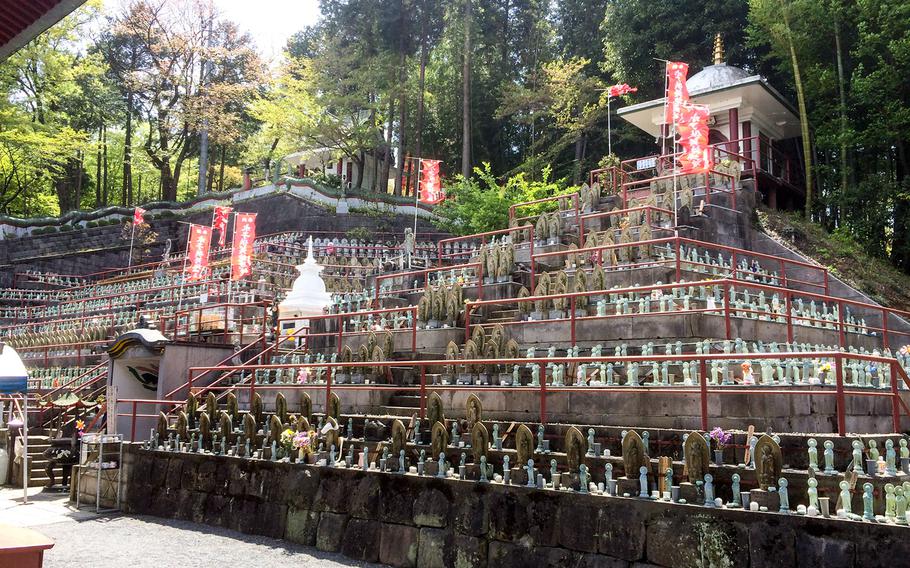 A Japanese cemetery, made up of terraced rows of stone memorials on a hillside, can also be found at the Buddhist temple near the Seibu Dome. (Leon Cook/Stars and Stripes) Carved dragons, which become giant thanks to forced perspective, accessorize staircases at the Yamaguchi Kannon temple in Kamiyamaguchi. (Leon Cook/Stars and Stripes)

If you’re looking for a place to pedal or jog to your heart’s content, a place free of traffic lights and mobs of pedestrians, with more excitement than Tama River’s flat trail, a bike path near Yokota Air Base in western Tokyo might be just that place.

The journey was the destination on a cool spring day when I scaled the hills of Saitama’s “Tamako-jitenshahokoshado Path” on a borrowed mountain bike. Fortunately, the trailhead is easier to find than it is to spell or pronounce.

The 22-kilometer scenic loop winds its way around Lake Tama, providing pleasant views as you tackle the hilly terrain surrounded by lush forests, with patches of tall bamboo and Japanese elm nestled in between.

I reached the trail from Yokota’s east gate by heading toward the Aeon Mall in Musashimurayama City. I then turned onto Route 55 and followed it north to the higher, semi-mountainous terrain.

Right at the base of the hill, I took a detour into an interesting-looking tunnel mouth and found myself in a long, damp, but well-lit tunnel under the hills. This eventually turned into five tunnels, with small outdoor sections between them.

According to historical information signs posted at the entrance, the tunnels were originally used for a light rail and to transport building materials for the construction of Murayamakami Dam in the 1920s.

These days, the railroad tracks are long gone, but the cool tunnels remain, providing to trail visitors what I would imagine is some welcomed relief from the sun on hot summer days.

Back at the main road, I continued my northward trek and worked up quite a sweat as I began climbing the seemingly endless hill.

There are many places to take a break along the trail. My companion and I stopped to check out the Yamaguchi Kannon, a buddhist temple with a five-story red pagoda. Though the pagoda was closed, I enjoyed a view of the monuments and architecture of the surrounding buildings while we rested.

After, we headed toward Lake Sayama, located a few minutes’ worth of pedaling north of Lake Tama. Besides riding across the dam, Sayama didn’t offer much else. Like Tama, it is also a drinking water reservoir, not a recreational lake.

From the park off the edge of Sayama, we went into the town of Kamiyamaguchi, which is known for many points of interest, including the pagoda we visited earlier. Two other places to see in Kamiyamaguchi are the home of the Seibu Lions, a Japan Pacific League baseball team, and the forest that inspired the Studio Ghibli animated film “My Neighbor Totoro.”

I did not visit the Totoro Forest this time — but a quick search online shows how similar the landscape is to the artwork featured in the movie, helping to draw many visitors in search of the film’s title character.

After we grabbed a quick bite at a roadside convenience store, we rejoined the Lake Tama trail at the Murayamakami Dam.

It’s a pleasant enough route, but a somewhat seedy area. We passed an abandoned love hotel, one of several in the area, as well as a few illegal garbage dump sites — which I couldn’t always see but could certainly smell.

Eventually, we found ourselves back on familiar ground and realized we had looped around the lake — so we cycled south along Route 55, down the endless hill, far less endless when downhill, and back to Yokota.

I’m a novice cyclist and this is probably the longest I’ve ever spent on a bicycle, so I was sore for several days. Even so, I enjoyed myself and wish I had seen the whole trail.

DIRECTIONS: From Yokota Air Base’s east gate, follow Route 55 north past Aeon Mall. You can find the trail as the road climbs into the hills.COSTS: Free. Public parking available in the area, but prices vary by lot.FOOD: Dining can be found in the more populated areas alongside the trail.