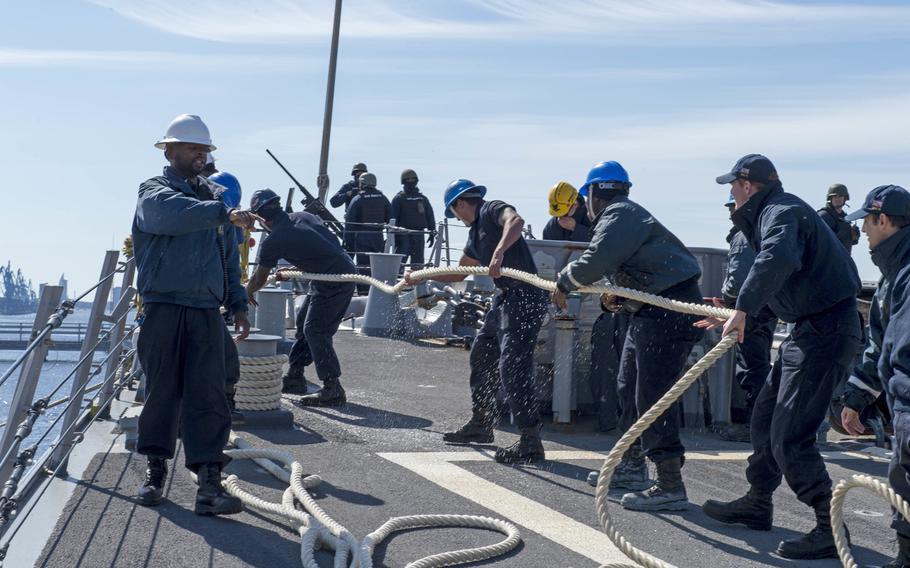 Sailors aboard the USS Donald Cook haul in a mooring line as the ship gets underway from Riga, Latvia, April 21, 2016. (Mat Murch/U.S. Navy)

Russian fighter jets buzzed the warship in international waters on April 11 and 12, coming within 30 feet of its stern. Another fighter jet then barrel-rolled over an Air Force reconnaissance aircraft in a separate encounter two days later.

The incidents, the first after months of relative quiet in the region, are fueling calls for NATO to coordinate on maintaining access to the sea — and for Russia to avoid a misunderstanding that could result in broader conflict.

“We are afraid that if you have such an accident or incident, then the other side would assume it wasn’t an accident, that it was something done intentionally,” said Lukasz Kulesa, research director at the London-based security think tank European Leadership Network. “Then the tensions can rise pretty quickly.”

The onus is on Russia to pull back from aggressive operations that began in 2014, Kulesa said. Political discussion then needs to increase between both sides, he said. Otherwise, the region risks becoming overmilitarized as Western nations seek to offset the Russian posture.

An agreement between NATO and Russia on behavior at sea could act as a pressure valve for the region, Kulesa said. Eleven NATO members currently have bilateral agreements with Russia that spell out dangerous activities at sea and in the air and the process and venue for addressing them, two of his colleagues at ELN wrote in March. Those agreements don’t go far enough, the authors wrote, and they don’t cover operations under NATO command.

“We believe the benefit of our proposal is you would create a uniform rules of behavior which would be equally valuable for all the member states, Russia and hopefully some partners,” Kulesa said.

The U.S. is one of those nations with a bilateral maritime agreement with Russia. Yet the Navy says some requirements of the Prevention of Incidents on and over the High Seas — which prohibits certain provocative actions and mandates communication between military vessels or aircraft — are routinely ignored by Russian pilots and crews.

The region is already being militarized, others say. They point first to Russia’s coastal exclave of Kaliningrad, which now hosts Iskander short-range ballistic missiles and an S-400 air-defense battery, both with ranges that reach well into neighboring air and sea space. Russia has also moved a Bastion coastal defense battery with anti-ship cruise missiles into Kaliningrad for exercises.

The U.S., meanwhile, is building a ballistic missile defense site near the Baltic coast in Poland, a system it says is defensive in nature and intended to offset a threat from Iran.

Russia has long criticized the project.

“They believe they are a Baltic Sea power,” said Magnus Nordenman, director of the Atlantic Council’s Brent Scowcroft Center on International Security. “They have Kaliningrad right there. They have St. Petersburg right there. And obviously there is a contest brewing over the Baltic states.”

If Russia’s missilery is a hard reminder of their ability to confront their neighbors or the U.S., their aggressive operations are meant to suggest their willingness, Nordenman said. Any hesitation by allies would complicate a NATO response to crisis or conflict in the Baltic states.

Nordenman proposes that NATO take a firm look at its posture in the Baltic Sea before such a crisis arises. Baltic allies count 15 attack submarines, 25 capable surface combatants and more than 400 fighter jets between them, according to a report co-authored by Nordenman in March.

By comparing those capabilities and the ability to deploy them, the alliance can better identify gaps and roles.

Even the smallest NATO members and those outside the alliance have a part, according to the report. The Baltic states are experienced in mine hunting, while nonmember Sweden has expertise on submarine operations in the sea’s extreme littorals.

The U.S., France and the U.K. can provide high-end capabilities, such as long-range strike and amphibious and carrier operations, Nordenman said. A regional air and maritime command could coordinate exercises and develop contingency plans.

In a region where many nations prefer to work directly with the U.S. on security issues, a maritime framework for the region could make U.S. participation even easier, Nordenman argues.

Whether either of these ideas is workable will be determined in bilateral meetings between nations and the coming NATO summit in Warsaw, where defense in the Baltic region — although primarily ground capabilities — will be a major topic.