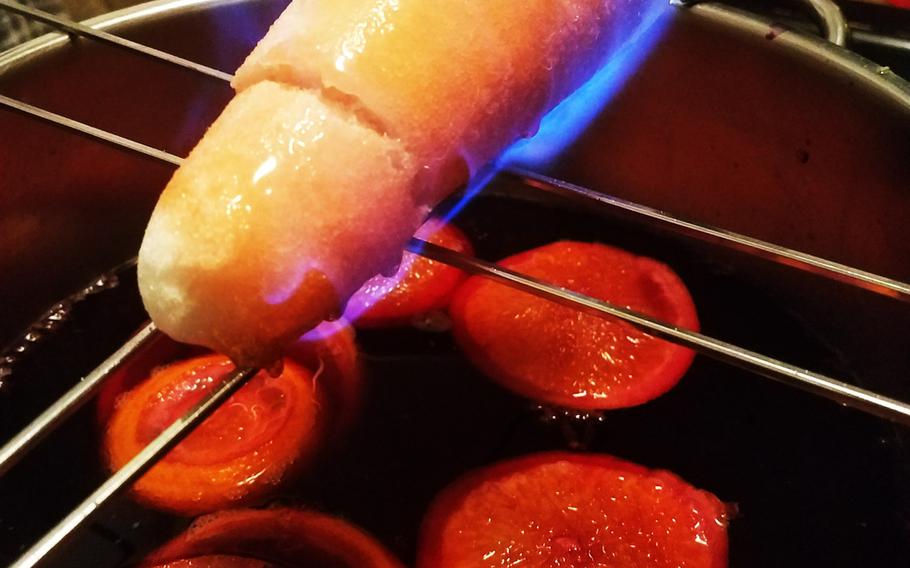 Feuerzangenbowle is Gluehwein's fiery cousin. The flaming Christmas drink has a a ''hat'' burning on top that drips sugar and rum into the bowl of wine, citrus and spices. . (Martin Egnash)

Feuerzangenbowle is Gluehwein's fiery cousin. The flaming Christmas drink has a a ''hat'' burning on top that drips sugar and rum into the bowl of wine, citrus and spices. . (Martin Egnash) 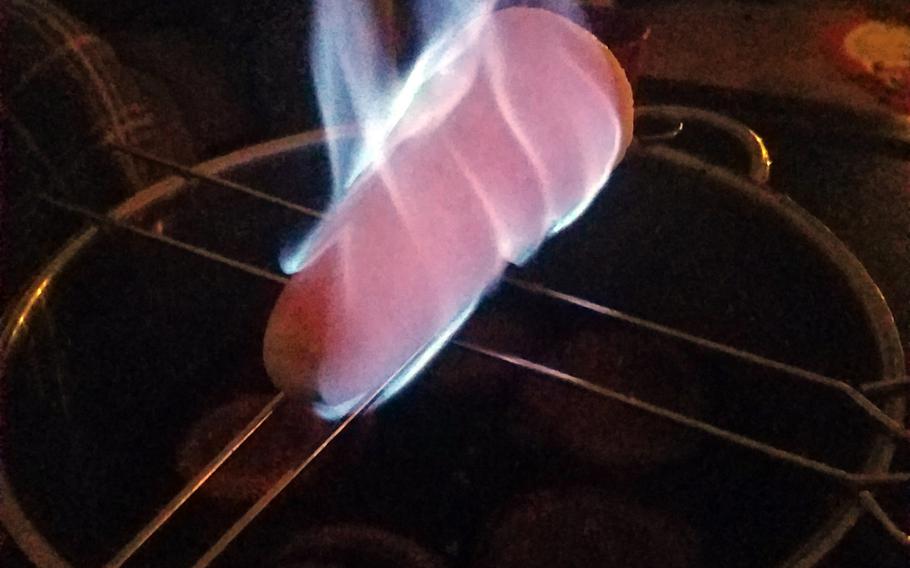 A Feuerzangenbowle, a flaming Christmas drink in Germany with a ''sugar hat'' burning on top. (Martin Egnash) 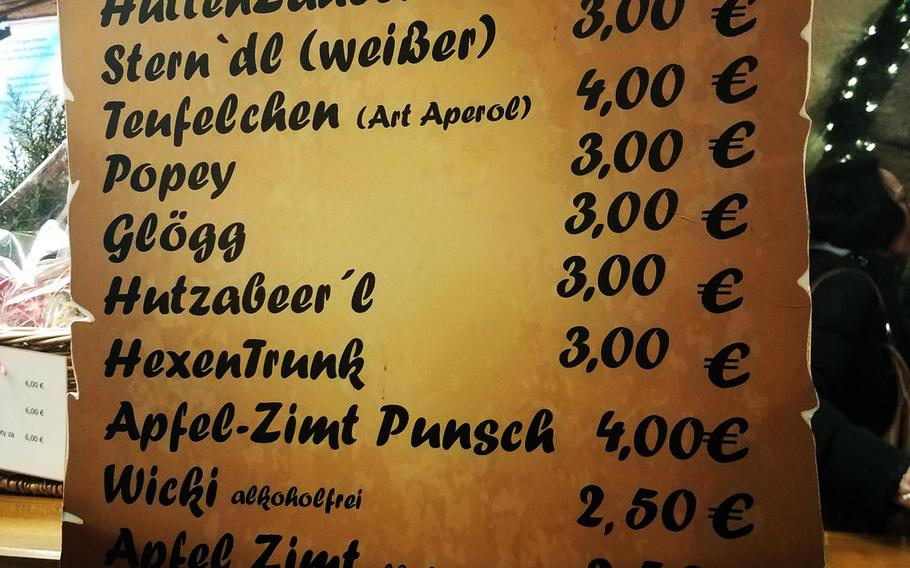 A sign lists a variety of Gluehweins at the Weiden Christmas Market, Nov. 30, 2019. (Martin Egnash) 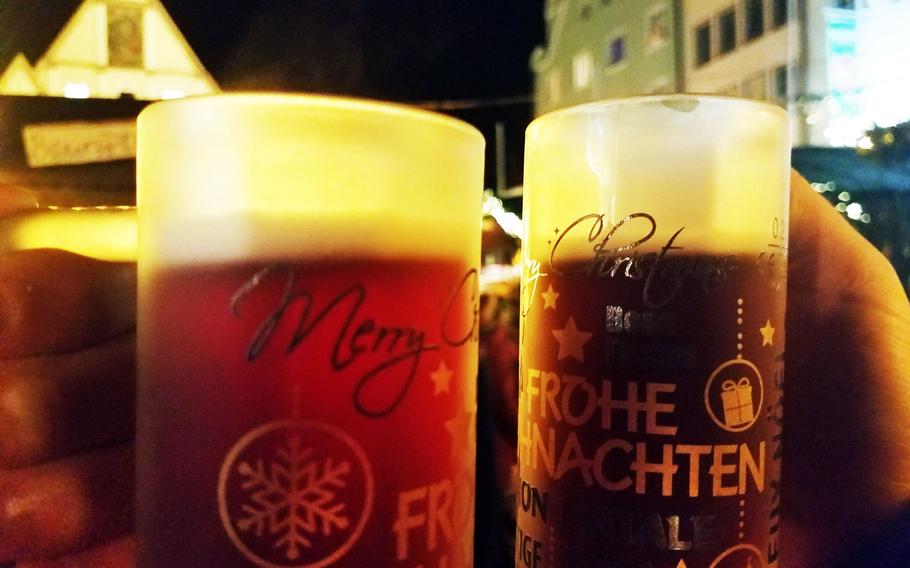 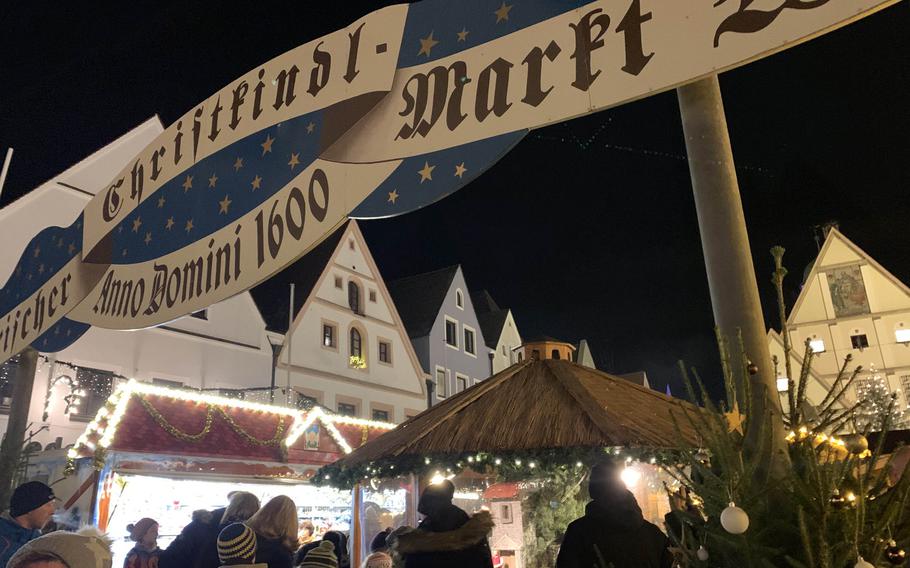 The entrance of a Christkindlmarkt or Christmas market in Weiden, Germany on November 30, 2019. These markets offer an assortment of goods and mulled wine, called Gluehwein in German. () 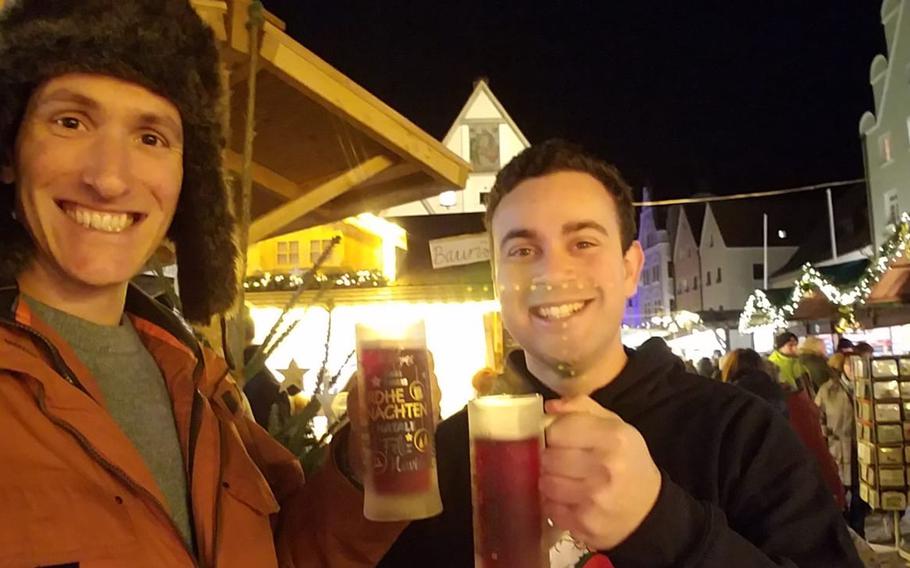 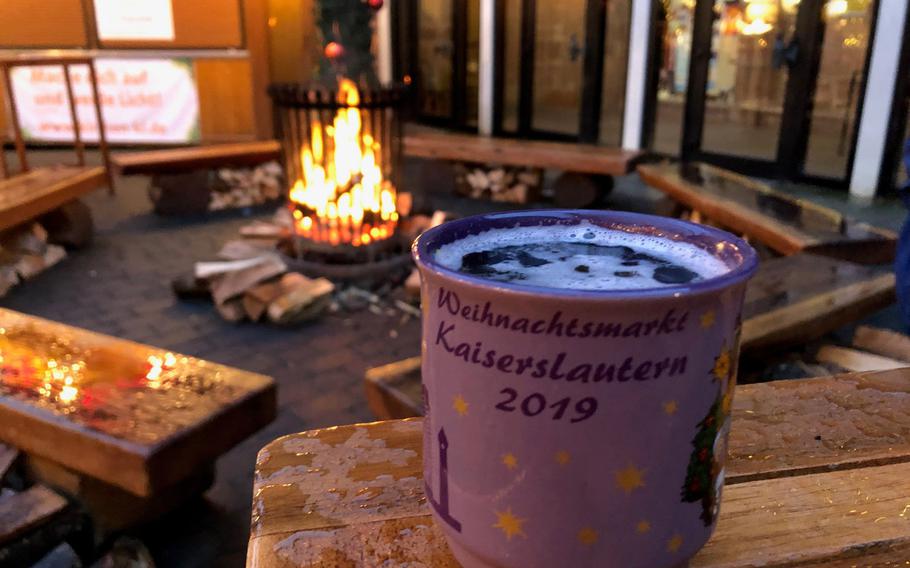 The Gluehwein mugs at the Kaiserslautern Christmas market this year are purple. Heather Benit/Stars and Stripes () 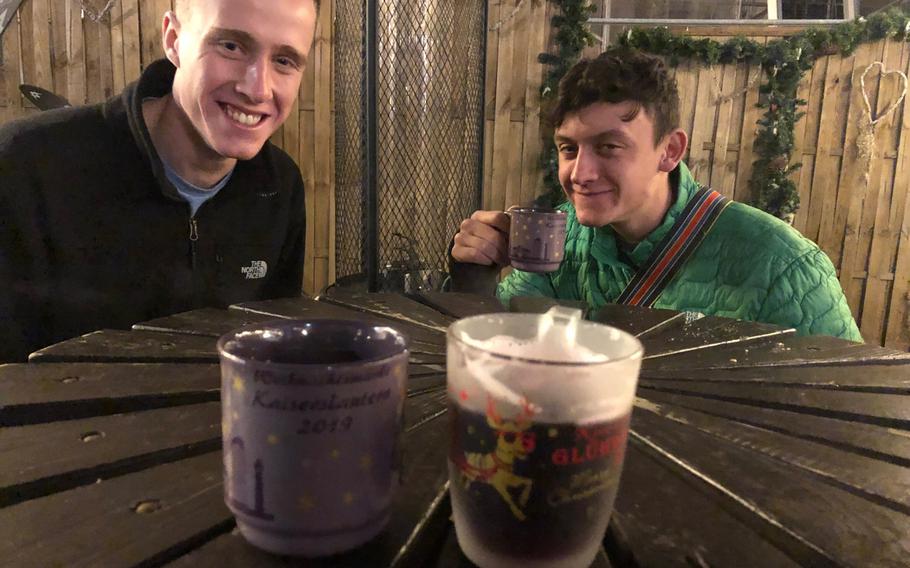 Luca Zeitvogel, left, and Marcos Ferreira, both 21, sample Gluehwein in the Christmas market in Kaiserslautern. () 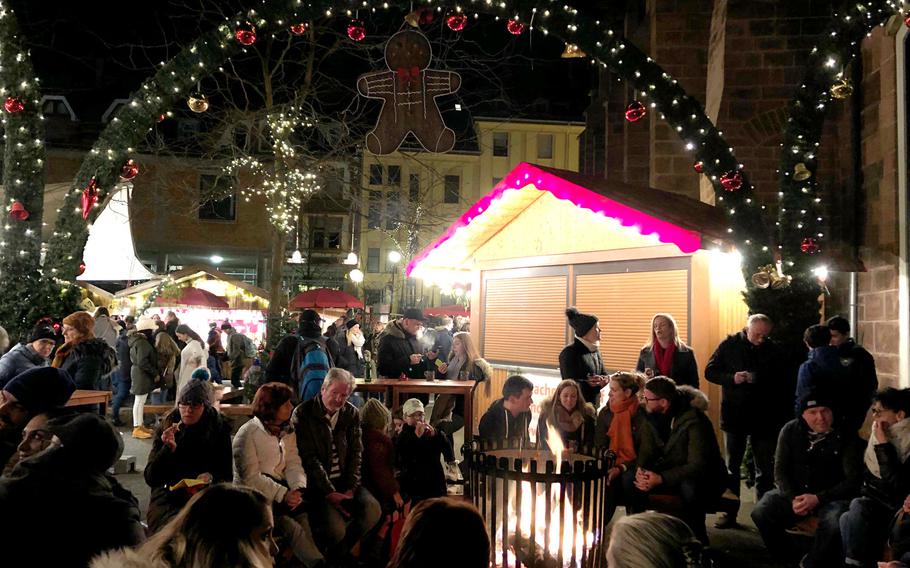 The open fire in front of Stiftskirche in downtown Kaiserslautern is a warm place to gather while sipping Gluehwein at the 2019 Christmas market. Heather Benit/Stars and Stripes () 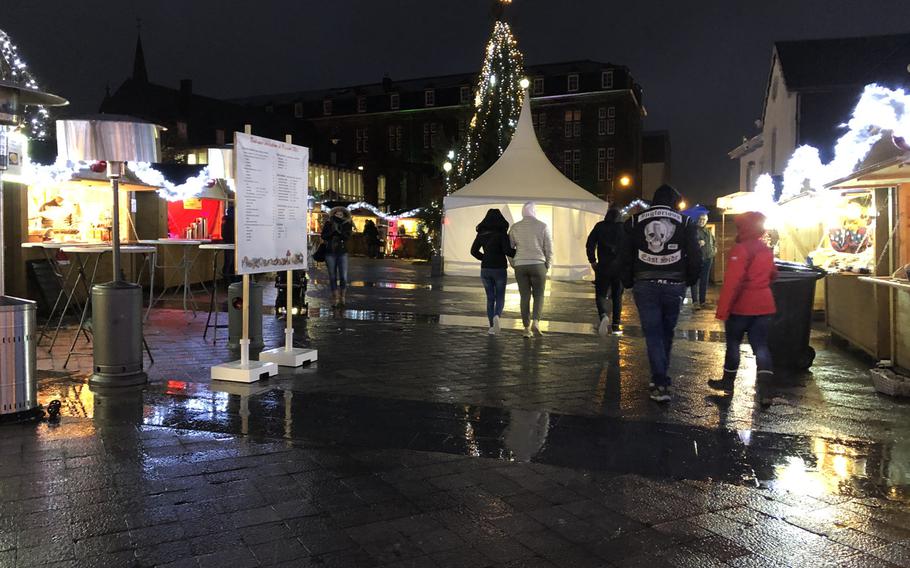 At least a dozen stands at the Christmas market in Bastogne, Belgium, offered different varieties of vin chaud, the French for Gluehwein on Dec. 15, 2019. ()

Gluehwein takes cheap red wine and makes it palatable by adding ingredients liked citrus fruit and many of the spices you find in gingerbread. Literally “glow wine”, it’s heated and served warm, but don’t be fooled: the alcohol hasn’t been burned off and it can make you plenty tipsy and unable to safely drive a car.

Our reporters fanned out to try the Gluehwein on offer at Christmas markets this year and delved into our memories to recall some of the best Gluehwein we’ve had in Christmas seasons past.

The Gluehwein at the Christmas market stand called Schoko B’E(l)las Gluehwein Haus near the Stiftsplatz has subtle overtones of citrus, cloves and cinnamon, and is neither too sweet nor too strong. Served in purple ceramic mugs, it goes down easily and pairs well with a side of locally grown potatoes cut in wedges and served with garlic herb sauce, available for 4 euros from the nearby Koch’s Wild Spezialitaeten’s stand. But what’s really special about Schoko B’E(l)las is its location next to an open fire and in the shadow of the city’s Gothic Stiftskirche — perfect for getting to know your German neighbors or complete strangers while sipping Gluehwein.

Opposite the Dolomiten Eis Café, is the Gluehwein Eck’, or Gluehwein Corner. Their Gluehwein, served in a clear glass mug, was heavy on cinnamon, which one of us thought made it the best mulled wine in Kaiserslautern.

The Gluehwein stand next door to the Eck’ served theirs in the same purple mugs as Schoko B’E(l)las. The taste wasn’t as good as the one from the Eck’ and this was the only place where we had a problem when we tried to return our mugs to collect the deposit. Make sure you get a casino chip when you buy your Gluehwein there and you won’t have the same issue.

All charged 3 euros for the wine and a 2.50-euro deposit for the mug.

The Gluehwein offered by Puur at the Christmas market in Weilerbach, near Ramstein, is the drink I most look forward to every holiday season. Made with merlot, it’s more spice than sweet and comes in a wine glass with an orange slice. It costs 3.50 euros, 6.50 euros if you want to keep the glass. Sadly, the Christmas market in Weilerbach is already over, but make a note on your calendar to go there next year to try Puur’s Gluehwein. They also have a winebar and restaurant on Hauptstrasse in Weilerbach.

There were about five Gluehwein stands at the Weiden market, which is close to Grafenwoehr. Of the flavors we tried, the cherry and blueberry ones stood out. Cherry Gluehwein is the mulled wine of choice for fans of cherry pie, and pairs beautifully with a warm pretzel or crepes. Blueberry Gluehwein is a little sweet for some people’s palates but added variety and a nice berry punch to an evening of research for this article. The cost of Gluehwein at the market was between 5 and 7 euros, including mug deposits of between 2 and 3 euros.

From Krakow, Poland to Bastogne, Belgium

The Gluehwein at the Christmas market in Krakow, Poland is hard to beat. I had it in 2005, and it still gets rave reviews online. Called grzaniec in Polish, which is too many consonants strung together for the average English speaker to attempt until they’ve had some Gluehwein, it tasted like gingerbread. It paired well with anything. I can’t remember how much it cost but I didn’t care. I had two cupsful.

Sadly, the budget for this article didn’t stretch as far as a trip to Krakow to see if the grzaniec was still as good, but I was able to travel to Bastogne, Belgium, about 90 minutes west of Spangdahlem, and try their vin chaud, Gluehwein’s French cousin. Of what must have been a dozen stands in the Christmas market that served vin chaud, I chose the seventh on the left (it didn’t have a name) and took a paper cup of Alsatian-style Gluehwein. It was strong on aniseed and citrus, and my co-taster thought it was just the right amount of sweet. But I still compare all Gluehwein to the one in Krakow and it wasn’t as good as that. Served in a paper cup, it also got cold faster than if it had been in a ceramic mug. This Gluehwein costs 3 euros, with no deposit because who wants to keep a paper cup?

If you’re looking to add a real punch to your heated holiday drink, try Gluehwein’s fiery cousin, the Feuerzangenbowle. Think Gluehwein with some fruit floating on top and a “sugar hat” balanced on the rim of the bowl the wine is served in. The “hat” is doused with super strong rum and lit on fire, allowing the sugar and alcohol to drip into the wine. Available at many Christmas markets, including in Kaiserslautern, it’s delicious and has a kick like a mule.