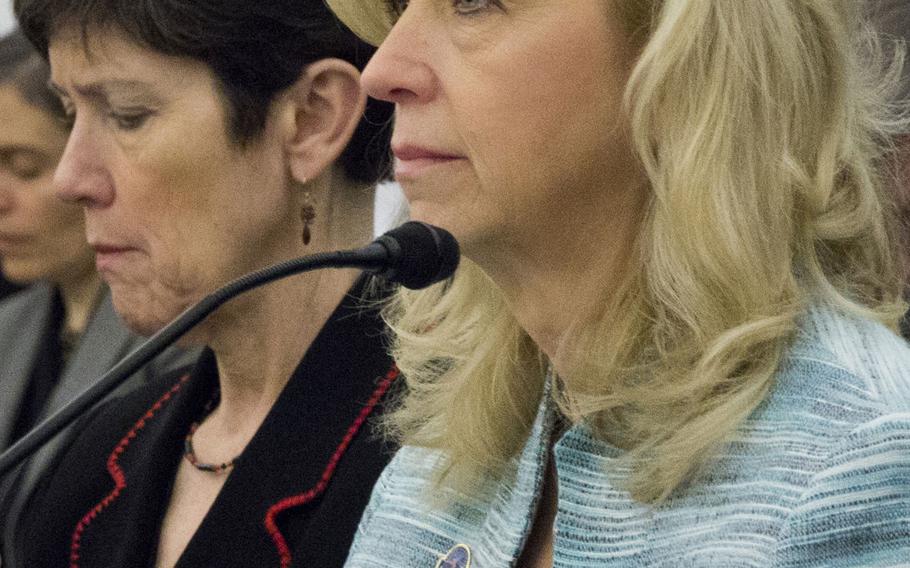 Allison A. Hickey, right, the Department of Veterans Affairs' undersecretary for benefits, at a House Appropriations subcommittee hearing on March 4, 2015. With her is Carolyn M. Clancy, the VA's interim undersecretary for health. (Joe Gromelski/Stars and Stripes)

WASHINGTON — The beleaguered undersecretary in charge of benefits for the nation’s veterans resigned Friday after being implicated in the latest Department of Veterans Affairs scandal.

Allison Hickey, a former Air Force brigadier general, was in charge of the Veterans Benefits Administration and oversaw 20,000 employees and is the highest ranking casualty of an 18-month VA crisis since Secretary Eric Shinseki resigned in May 2014.

She was at the center of a recent VA Inspector General’s report that found she had helped two employees manipulate the hiring system for financial gain.

Included in those employees’ moves was $400,000 in moving compensation that Hickey had approved for two regional directors.

The IG referred criminal complaints for those directors, Diana Rubens in the Philadelphia VA Regional Office and Kimberly Graves in the St. Paul (Minn.) VA Regional Office. The IG report also suggested Hickey be considered for disciplinary action. Hickey had told Stars and Stripes she picked Rubens to clean up the Philadelphia office, which had its own scandal that included discarded veteran mail and rodent-infested, unsafe working conditions.

VA Secretary Bob McDonald released a statement Friday saying he had accepted her resignation “with regret.”

Hickey was slated to testify at a hearing of the House Committee on Veterans Affairs on Wednesday, along with Rubens and Graves, in what promised to be a tense exchange with lawmakers.

“She leaves the department amid a damning office of inspector general report linking her to a scheme in which senior Veterans Benefits Administration officials abused their authority, resulting in the misuse of hundreds of thousands of taxpayer dollars,” the committee’s chairman, Rep. Jeff Miller, R-Fla., said in a statement. “Right now, VBA needs a leader who will put veterans – not VA bureaucrats — first while working to end the backlog without sacrificing quality, accuracy or service to veterans. Unfortunately, Hickey was not that type of leader.”

Lawmakers have been harshly critical of her since the IG report, and the head of the American Legion, Dale Barnett, called for Hickey to resign; Barnett was also invited to the hearing. Sen. Richard Blumenthal, D-Conn., has called for the Department of Justice to investigate the findings of the report, and a separate letter from Blumenthal and a bipartisan group of senators called on McDonald to take “immediate action” to address the findings.

It was not clear whether Hickey would still be asked to testify. She did not immediately respond to an email request for comment.

In an email obtained by Stars and Stripes titled “My final love note — Thank you and God Bless!” Hickey lays out her accomplishments at the VA, including a reduction in the claims backlog, but does not mention the scandal.

“After 4.5 years of this blessed honor, it is time to serve others and you in a different way,” she wrote Friday to her staff.

Hickey was hired as undersecretary for benefits in June 2011. In his letter announcing her resignation, McDonald credited her with helping to increase the numbers of veterans and survivors receiving benefits and for reducing the claims backlog.

McDonald did not mention the IG report in his letter.

“The Department of Veterans Affairs, and I personally, appreciate all that Allison has done to help transform VA for the Veterans we are privileged to serve,” he said in the statement. “She has been an exceptional colleague and an even better friend, to me. Her commitment to excellence and service to our country is unquestioned, and we wish her all the best in her next endeavors.”