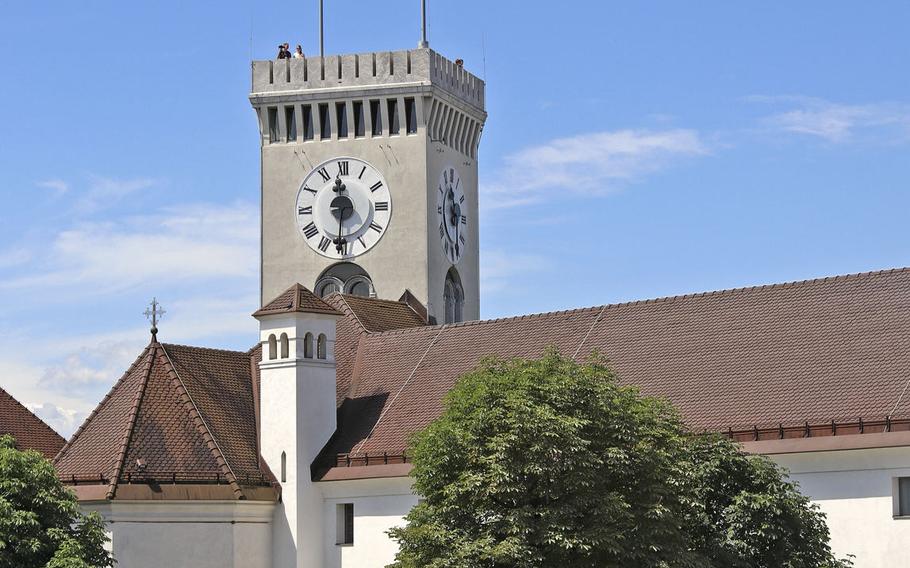 View of the clock tower at Ljubljana Castle in Slovenia's capital city, Ljubljana. The castle can be reached by funicular railway, and offers some of the best views of the city, particularly from the clock tower. (Norman Llamas/Stars and Stripes)

View of the clock tower at Ljubljana Castle in Slovenia's capital city, Ljubljana. The castle can be reached by funicular railway, and offers some of the best views of the city, particularly from the clock tower. (Norman Llamas/Stars and Stripes) 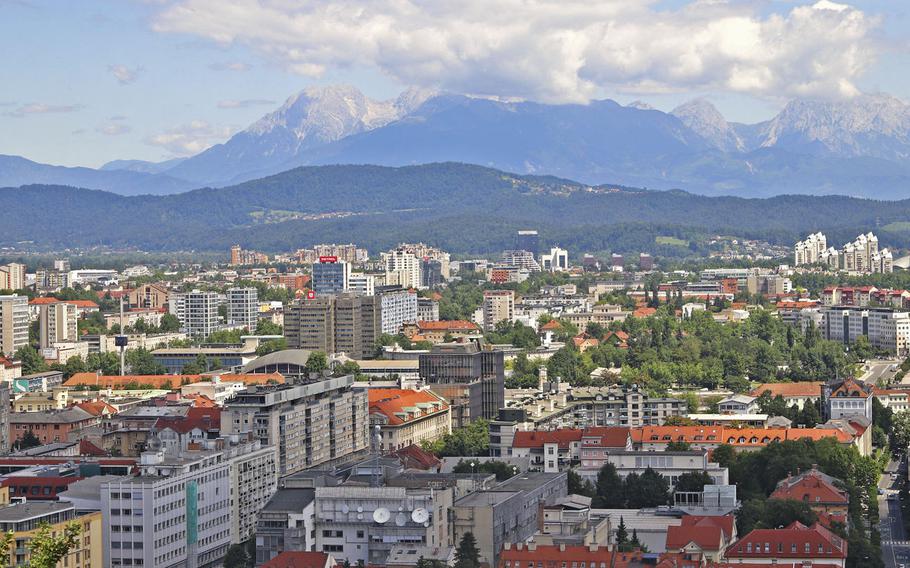 View of Slovenia's capital city, Ljubljana, from the courtyard of the castle perched above the city. (Norman Llamas/Stars and Stripes) 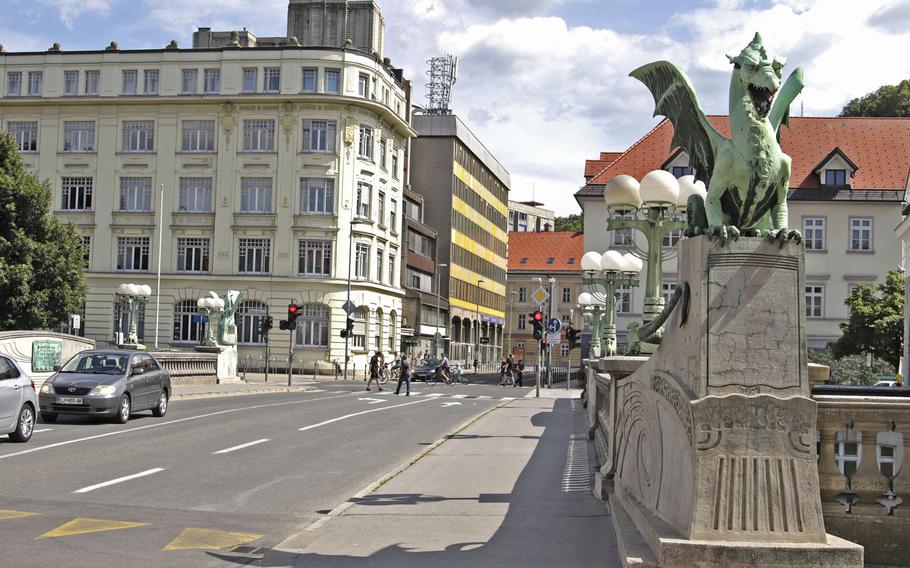 The Dragon Bridge, in Ljubljana, Slovenia, is adorned with dragon statues. Constructed between 1900 and 1901, the bridge was Ljubljana's first reinforced concrete structure and one of the largest bridges of its kind to be built in Europe. (Norman Llamas/Stars and Stripes) 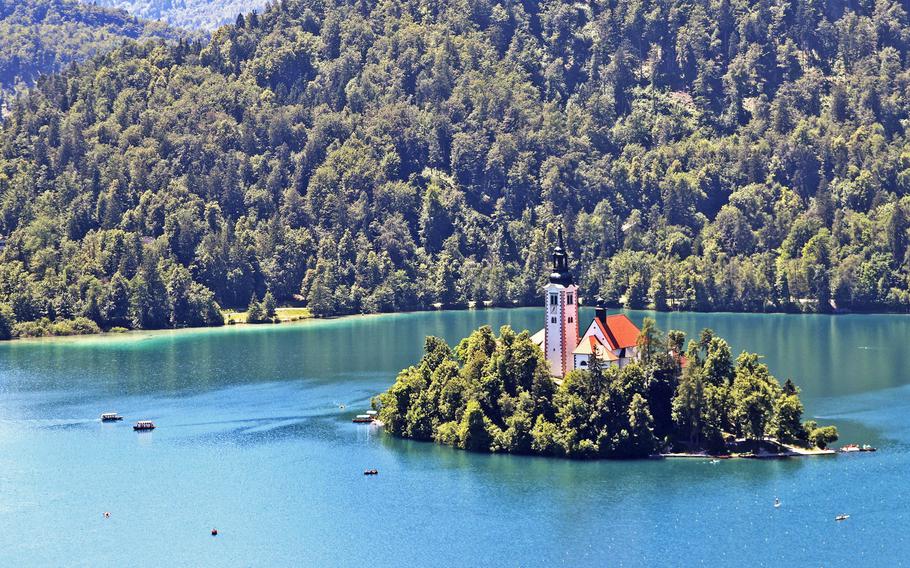 Bled Island, in Lake Bled, Slovenia, houses the Pilgrimage Church of the Assumption of Mary. Before the church was built on the island, a temple dedicated to the pagan goddess of life and fertility stood at the same place. (Norman Llamas/Stars and Stripes) 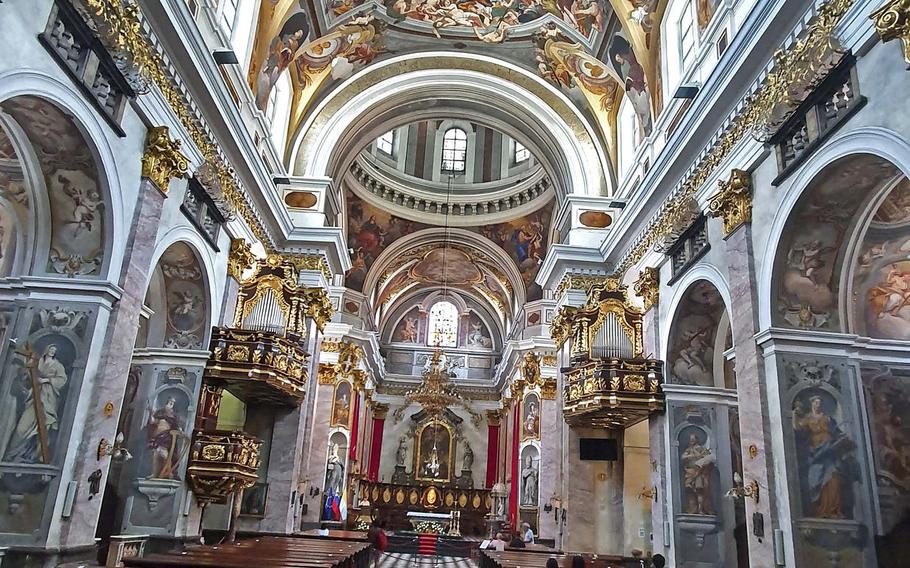 St. Nicholas' Cathedral in Ljubljana, Slovenia, was completed in 1707 and is Ljubljana's most important and best-preserved religious building. The church's interior is decorated with vivid frescoes depicting the many miracles of St Nicholas. (Norman Llamas/Stars and Stripes) 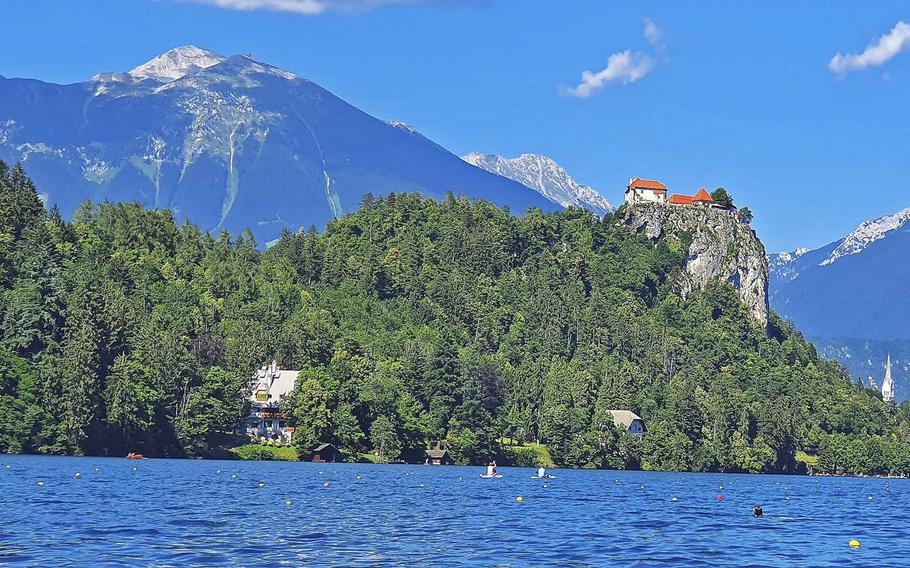 Lake Bled Castle as seen from the middle of Lake Bled. Built in the 16th century, the castle offers spectacular views of the lake and the city of Bled. (Norman Llamas/Stars and Stripes) 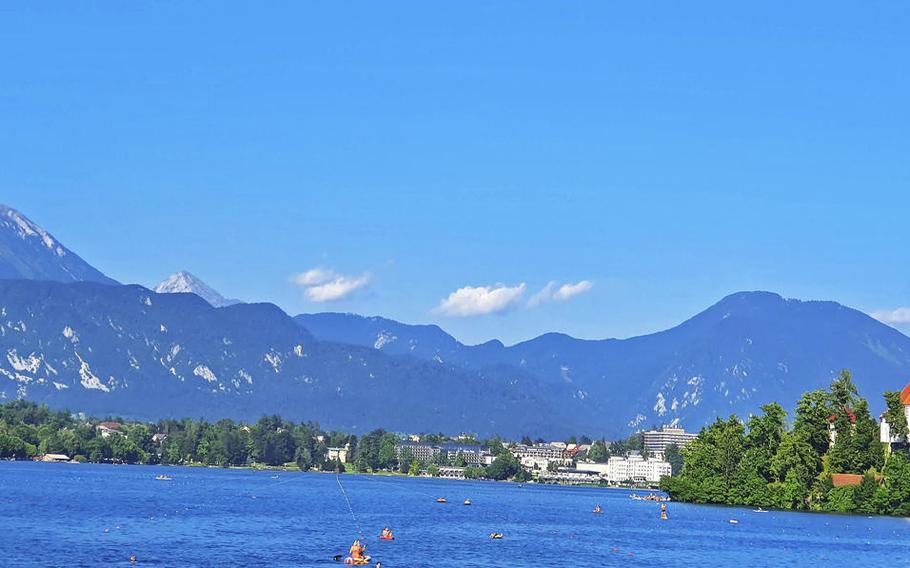 A view of Bled Island, right, and Bled Castle, left, from Lake Bled, in Slovenia. (Norman Llamas/Stars and Stripes) 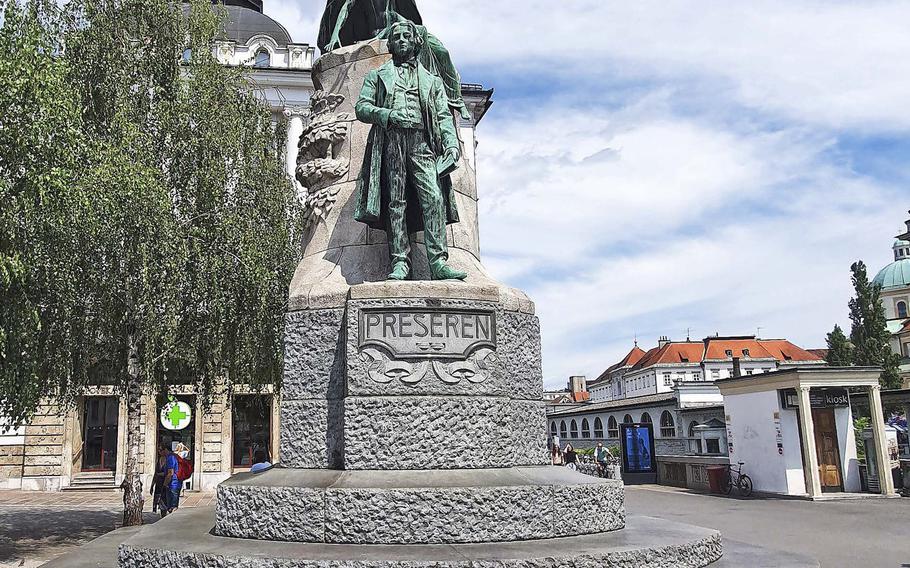 A statue of France Preseren, a Slovenian poet who is best known for his sonnets, in Slovenia's capital city, Ljubljana. (Norman Llamas/Stars and Stripes) 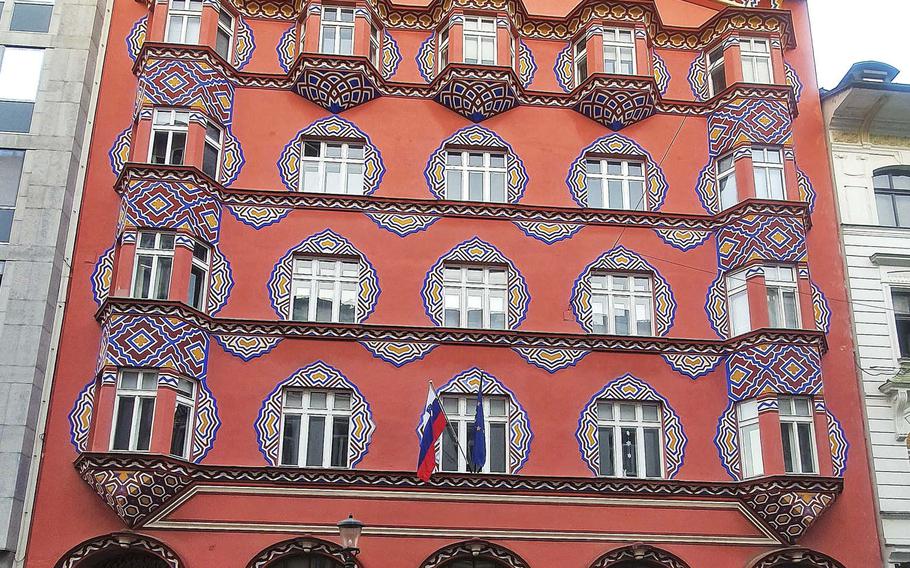 Vurnik House, also known as the Cooperative Business Bank building, in Ljubljana, Slovenia, could be the most colorful building in the city. It was finished in 1922 by architect Ivan Vurnik, and is considered to be typical of Slovenian architecture. (Norman Llamas/Stars and Stripes) 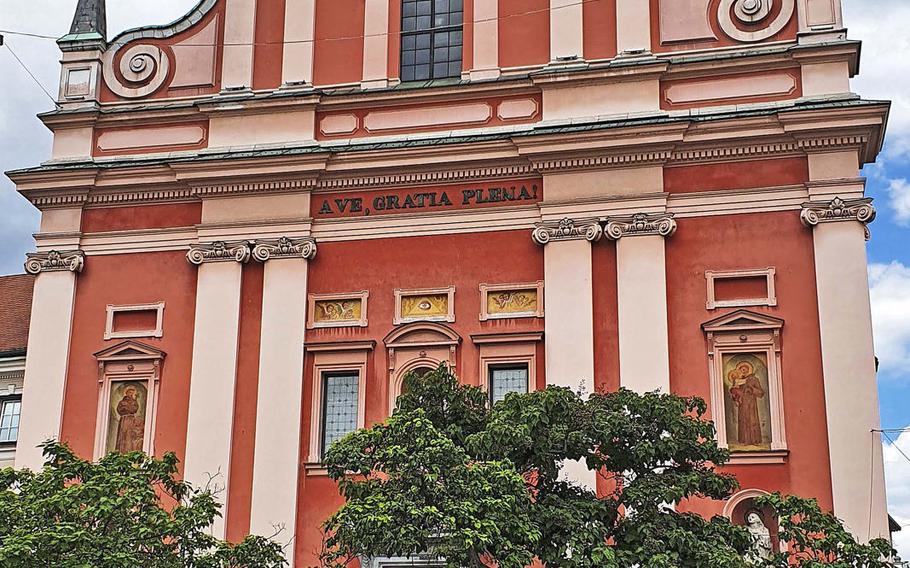 Visiting Slovenia had been a dream of ours for some time. So after the worst of the coronavirus in Italy had passed and Slovenia reopened its border to visitors from its neighbor, we made the trip.

We drove to Slovenia from Aviano Air Base over the long Fourth of July weekend, taking in beautiful mountain views and enjoying light traffic on the way.

Our first destination was Ljubljana, steeped in history and also one of the most environmentally friendly capital cities in the world. Named European Green Capital in 2016, the tap water in Ljubljana is not treated with any chemicals but is safe to drink.

The first night, we went for a stroll around the city center, bustling with locals and tourists.

Both the indoor and outdoor dining areas of all the restaurants were packed, so we got our meals to-go from a Thai restaurant and took them back to the Airbnb we’d booked in the heart of the city.

The next day, we visited Ljubljana Castle. Originally a medieval fortress that was rebuilt in the 12th century, the castle offers spectacular views of the city, especially from the clock tower. It also has an expansive and beautiful courtyard.

Then it was off to St. Nicholas’ Cathedral, which was completed in 1707 and is Ljubljana’s most important and best-preserved religious building. The exterior of the church isn’t anything special, but the interior is magnificently decorated with vivid frescoes depicting miracles performed by St. Nicholas. It’s open daily from 6 a.m. to 12 p.m. and from 3 to 7 p.m, with a 3-euro entrance fee.

During our short stay in Slovenia, we also visited Lake Bled, where there’s an island that’s said to be one of the most photographed spots in Europe.

There’s also another castle there, this one from the 16th century, perched on a hill, 130 yards above the glacial lake and the city of Bled. In addition to splendid views of the surrounding countryside — some of the best of which are from the castle’s restaurant — the castle has a print shop, where visitors can make their own souvenir documents using traditional printing methods, and a wine cellar offering the opportunity to bottle wine and seal it with wax.

Another souvenir to take home from the castle is a commemorative iron coin that visitors can craft on the blacksmith’s anvil. The blacksmith’s workshop offers already made products, too.

To get to Bled Island, we rented a rowboat for 20 euros per hour. There’s also a ferry service for 12 euros per family.

Plenty of people swim in Lake Bled, some venturing beyond the marked-off swimming areas, although that’s probably only a good idea for strong swimmers.

With restaurants and hotels all around the lake, there’s no shortage of places to eat or stay. But with Lake Bled only 34 miles away from Ljubljana, or a 45-minute drive, it also makes for a good day trip for those staying in the capital.

DIRECTIONS: Slovenia is roughly 130 miles east of Aviano Air Base, or about a two-hour drive.

COSTS: Parking in Ljubljana: Public parking spaces in Ljubljana are free from 3 p.m. Saturday until Monday at 7 a.m., but they’re very limited. Private lots charge 15 to 25 euros per day. Parking at Lake Bled: We paid 3 euros to park at the castle for 2 ½ hours, which is plenty of time for a visit; Ljubljana Castle can be reached by funicular railway, which costs around 31 euros roundtrip for a family of four. That includes the entry fee for the castle.

FOOD: Many dining options in Ljubljana can be found along the Ljubljanica River, which runs through the city center. Most restaurants have open-air seating; Most restaurants at Lake Bled offer seafood. Meals cost between 20 and 30 euros (everything around the lake is more expensive).