Beautiful San Marino is one of the world’s smallest countries 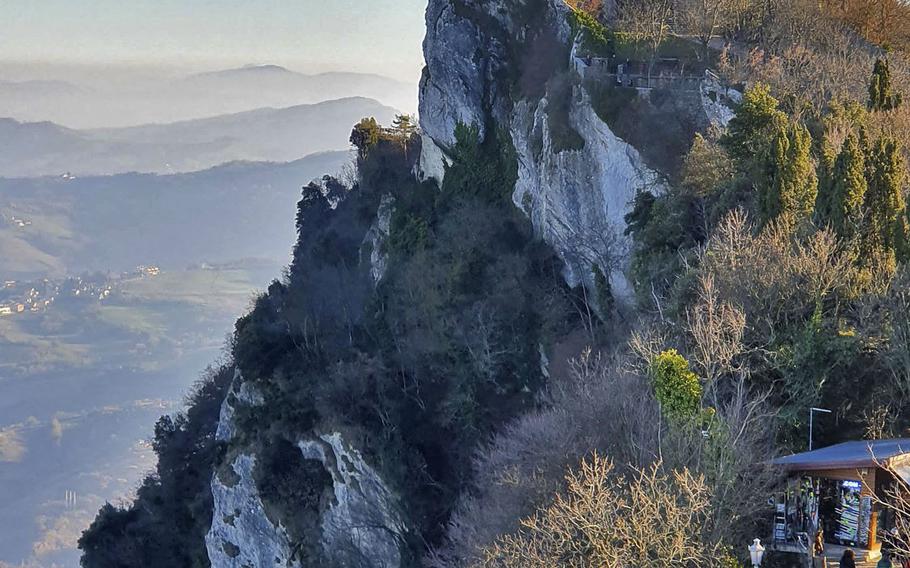 Buy Photo
Cesta tower, also known as De La Fratta, is located on the highest of the three peaks of Monte Titano, in San Marino's capital city. It was constructed in the 13th century on the remains of a Roman fort. Under the tower is a museum showcasing weapons that were used from the 15th century onwards. (Norman Llamas/Stars and Stripes)

Buy Photo
Cesta tower, also known as De La Fratta, is located on the highest of the three peaks of Monte Titano, in San Marino's capital city. It was constructed in the 13th century on the remains of a Roman fort. Under the tower is a museum showcasing weapons that were used from the 15th century onwards. (Norman Llamas/Stars and Stripes) Buy Photo
Guaita tower, also known as La Rocca, is one of three towers in the city of San Marino, capital of the country by the same name. Constructed between the 10th and 11th century, it was the first tower built in San Marino. (Norman Llamas/Stars and Stripes) Buy Photo
Basilica Di San Marino, also called La Pieve, in San Marino's capital city, San Marino City, is shown here in January 2020, before the coronavirus. It was built in the 19th century on the foundations of the original church dedicated to St. Marinus, who founded San Marino in the year 301. (Norman Llamas/Stars and Stripes) Buy Photo
The view from the walls of San Marino's capital city, also called San Marino. One of the smallest countries in the world, San Marino was founded in 301 AD by a stonemason named Marinus. (Norman Llamas/Stars and Stripes) 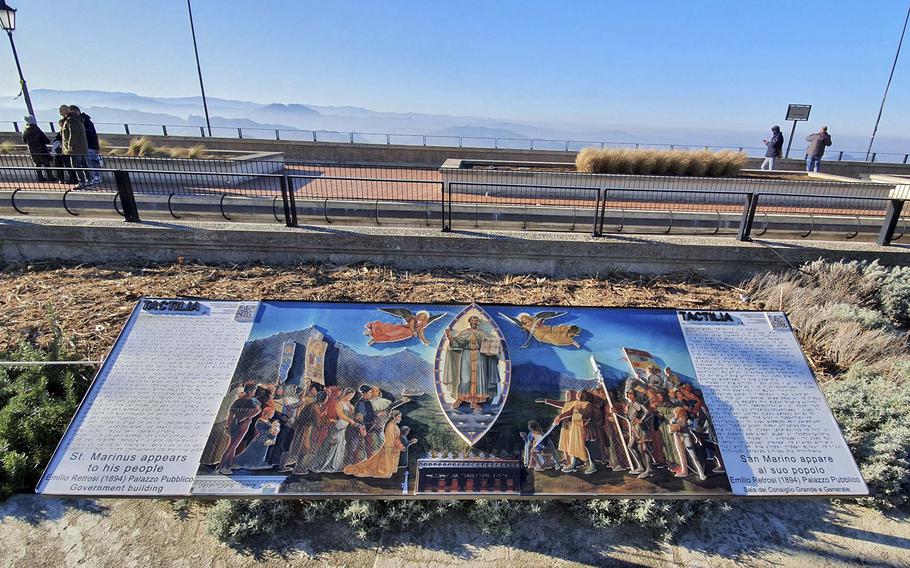 Buy Photo
A monument dedicated to St. Marinus, founder of the country of San Marino, in San Marino City. (Norman Llamas/Stars and Stripes) 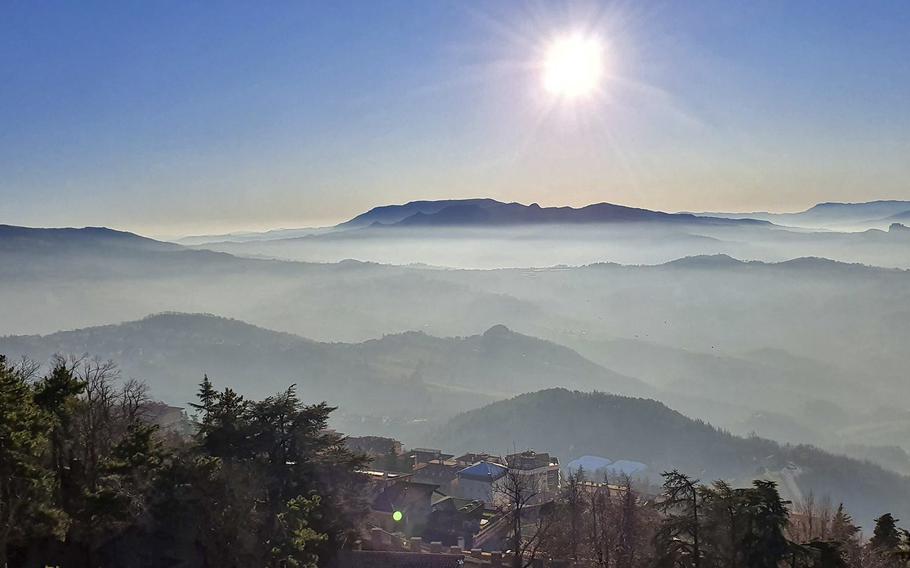 Buy Photo
One of the views from the city of San Marino, which sits atop Mount Titano in the tiny country of San Marino. Founded more than 1,700 years ago, San Marino is completely surrounded by Italy. (Norman Llamas/Stars and Stripes) Buy Photo
View of part of the country of San Marino, from San Marino City, which was built on Mount Titano, one of the peaks of the Apennine mountains. (Norman Llamas/Stars and Stripes) 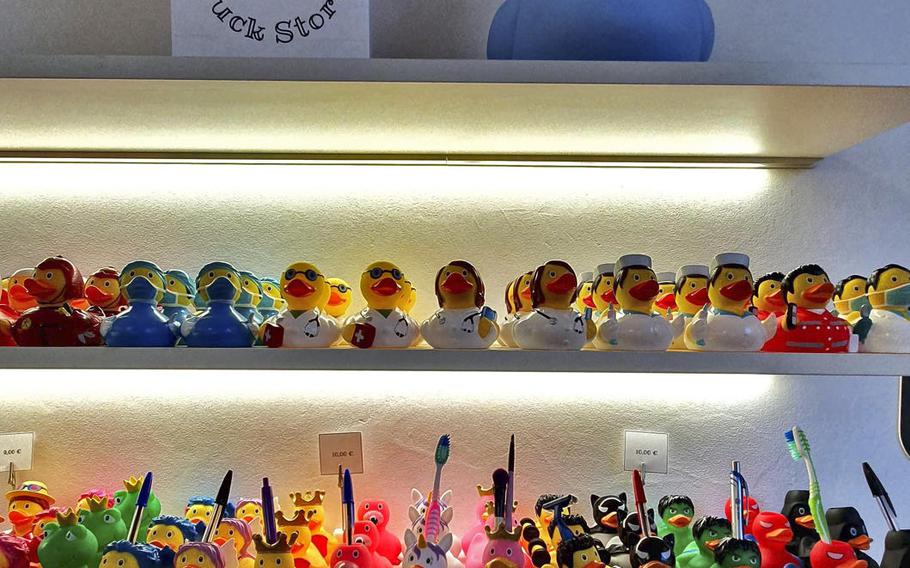 Buy Photo
The Duck Store in San Marino City, San Marino, sells nothing but rubber ducks. The shop had reopened by the end of May, but only one person at a time was allowed inside, unless they were with family, and they had to respect anti-coronavirus measures like social distancing. (Norman Llamas/Stars and Stripes)

San Marino is full of superlatives.

It’s one of the world’s smallest countries — a microstate covering around 24 square miles, or less than half the area of Washington, D.C. — and is completely surrounded by Italy.

Founded in the year 301, it’s said to be the oldest country in the world, and has the oldest constitution, dating from 1600.

Also called the Most Serene Republic of San Marino, it’s one of the most spectacular destinations for anyone living in Italy who’s looking for a day trip or weekend getaway, when coronavirus restrictions make that possible. It’s about four hours by car from Aviano, which is where we set out from one day before the pandemic made traveling impossible for people living in Italy.

Mount Titano dominates San Marino’s landscape. The capital, also called San Marino, with its cobblestone streets and medieval walled old town, sits atop the mountain and is the country’s most visited tourist attraction. Three fortresses dating from medieval times look from Mount Titano toward Rimini and the Adriatic coast. A footpath connects all three.

The best way to get to the city center — which, together with the mountain it sits on, was named a UNESCO World Heritage site in 2008 — is by cable car. You’ll find it about halfway up the mountain, with parking available in several lots. A roundtrip ticket is 4.50 euros, except for children under 4 feet tall and muzzled dogs, who ride for free.

Bring a camera because when you get to the top, you’ll be greeted by one of the most magnificent views you’ve ever seen.

There are also nonmedieval attractions in San Marino, and one that we particularly liked is a small store on Via Eugippo, in the city center at the top of Mount Titano, that sells nothing but rubber ducks. There are ducks depicting Star Wars characters, the Minions, an official San Marino duck, even a President Donald Trump duck.

As of late May, the Duck Shop was welcoming customers again, but only if they wear face masks and follow other anti-coronavirus guidelines like social distancing. You’re only allowed into the shop one at a time, unless those with you are family members.

If you like collecting passport stamps, San Marino has a very nice one that you can buy for about 5 euros at the tourist office by the cable car stop at the top of Mount Titano.

Expect to do a lot of hill walking in the city. If you’re used to hiking, you’ll be fine, but make sure to take frequent breaks, wear the right shoes and have plenty to drink. Also note that the city center gets very crowded on weekends, holidays and during the summer months, and some attractions may not be open, or may be operating on a limited schedule, because of coronavirus restrictions.

DIRECTIONS: San Marino is about 220 miles south of Aviano, or roughly four hours by car. Once you’re off the highway, follow signs to the capital city and cable car.

COSTS: Parking lots have meters and the cost varies depending on how long you stay. We paid about $15 for around 4 hours of parking in the city of San Marino. Be careful not to park in areas reserved for residents, typically marked by yellow lines. You will get a ticket and your car could be towed. San Marino has the usual selection of museums — contemporary art, history of the city, etc. — and some unusual ones, like museums of creatures of the night, of old weapons, new weapons, or instruments of torture. Entry fees are very reasonable.

FOOD: There are restaurants throughout the city, and stands offering fast food can be found on the footpath connecting the three fortresses.