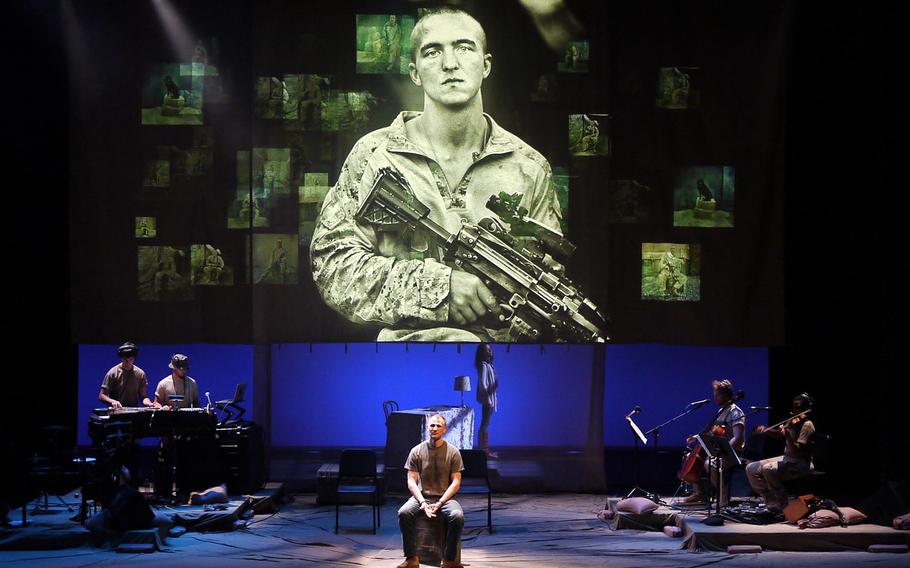 Marine veteran Tyler La Marr, center stage, performs in BASETRACK Live, a multimedia theater show about a Marine in Afghanistan, his family and the challenge of coming home after war. The performance is coming to the University of Maryland Saturday at 8 pm and will include a post-performance discussion with BASETRACK's creative team. (En Garde Arts)

Back from two tours with the U.S. Marines in Iraq, Tyler La Marr couldn’t let it go when a civilian woman in a Wal-Mart started talking about all the horrors of the U.S.-led war in that country.

“I told her that until you decide to put a rifle in your hand and go to Iraq, maybe you should just shut up about things you don’t know,” he recalled.

He was angry. Angry at what he saw as a distorted picture of the conflict portrayed by the media and angry with a public that understood very little about the war or those fighting it.

“But looking back,” he said, “that’s all the information” she had.

At a time when 1 percent of Americans enlist in the nation’s all-volunteer Army, the gap between the public and those who have served is widening, especially as hundreds of thousands of troops have gone to war in the past 13 years.

La Marr found a way to bridge that gap, starring in a multimedia performance called “Basetrack Live,” which uses storytelling, music, photos and video to tell the story of a Marine’s journey to Afghanistan and back home.

The show, which is touring the country through March, is coming to the University of Maryland’s Clarice Smith Performing Arts Center in College Park, Md., on Saturday.

Inspired by an online project by photojournalists embedded with the 1st Battalion, 8th Marines in Helmand province in 2010, “Basetrack Live” is the story of enlisted Marine A.J. Czubai and his wife, Melissa, and how the two experience his deployment and post-deployment struggles. The two-person show is interlaced with live music, ranging from classical to hiphop, and a constant background stream of documentary photos and video from Afghanistan.

“What I love about ‘Basetrack’ is that it exists at the intersection of art and journalism,” show creator Edward Bilous said.

Bilous, director of the Center for Innovations in the Arts at The Juilliard School, developed the show four years ago, after seeing the online Basetrack. He has worked on several military-themed productions and said he is drawn to troop experiences because he believes their sacrifices are not well understood.

“It’s absolutely a non-partisan piece — not pro-war, against war, red state or blue state,” Bilous said. “Just an authentic look at the experiences these men and women have in the context of war.”

La Marr, who spent six years in the Marines and founded The Society of Artistic Veterans, said he wants to help audience members get past the empty “thank you for your service” gestures and build genuine understanding of what veterans experience.

“I wanted to really start a conversation and give people an inside look into this very private part of military life,” he said.

“Basetrack Live” focuses on the personal side — Melissa spends much of the show speaking into a computer, simulating the Skype conversations that have become a lifeline for deployed troops trying to stay in touch with their loved ones. It’s not gory or action-packed, and La Marr and the show’s creative team hopes to get away from the hero and ticking time bomb narratives so often associated with troops.

“We don’t need to be bubble-wrapped and handled with care just because (we) may have PTSD,” he said. “At the end of the day we’re still people; we’re husbands and sons and wives and brothers.”

The show is a stand-alone piece of art, Bilbous said. But he also hopes those who see the performance will take its lessons home with them.

“We’re taking one very specific story of one veteran and his family and putting it on stage as an example of the kinds of experiences these men and women have and hoping the conversation will continue beyond the stage and into their homes and schools,” he said.

La Marr has his own advice for anyone struggling with how to approach a veteran to ask about their service: “If you really want to know something from a veteran … just ask them three questions: when did they serve, where did they serve and what was their job. And they’ll tell you what they’re willing to tell you.”