Lakenheath's CJ Jackson get off one of his many 3-pointers, as the Lancers beat the Warriors 50-47 in Wiesbaden, Saturday. (Michael Abrams/Stars and Stripes)

Lakenheath's CJ Jackson get off one of his many 3-pointers, as the Lancers beat the Warriors 50-47 in Wiesbaden, Saturday. (Michael Abrams/Stars and Stripes) 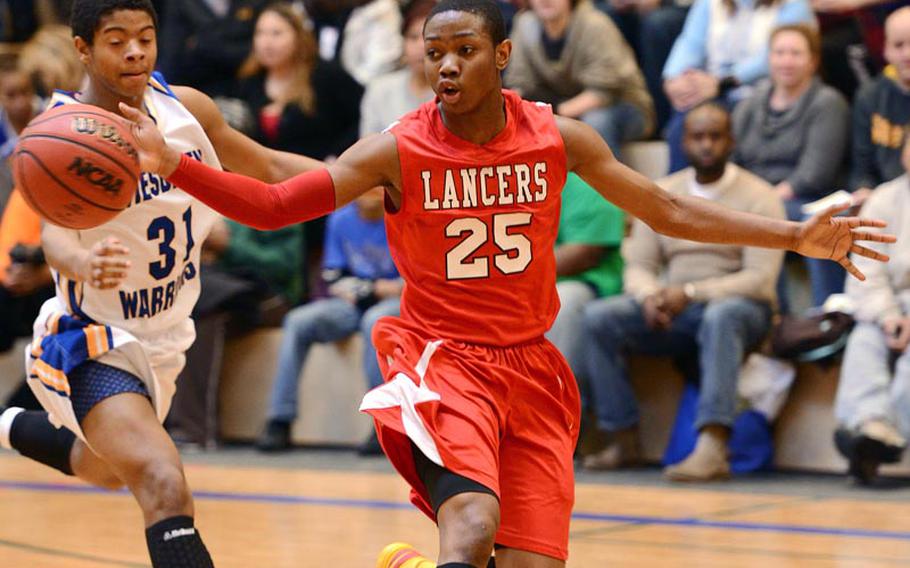 Lakenheath's Albert Jones gets past Wiesbaden's Carlos Grinter and dishes off to teammate AJ Ransom who scored to finish a fast break in the Lancers 50-47 win in Saturday's game at Wiesbaden. (Michael Abrams/Stars and Stripes) Lakenheath's Andre Bowser, left, shoots over Wiesbaden's Andrew Murray in a Saturday game in Wiesbaden. The Lancers staved off a Wiesbaden comeback to hold on to a 50-47 win. At center is Tyler Cordoni. (Michael Abrams/Stars and Stripes) 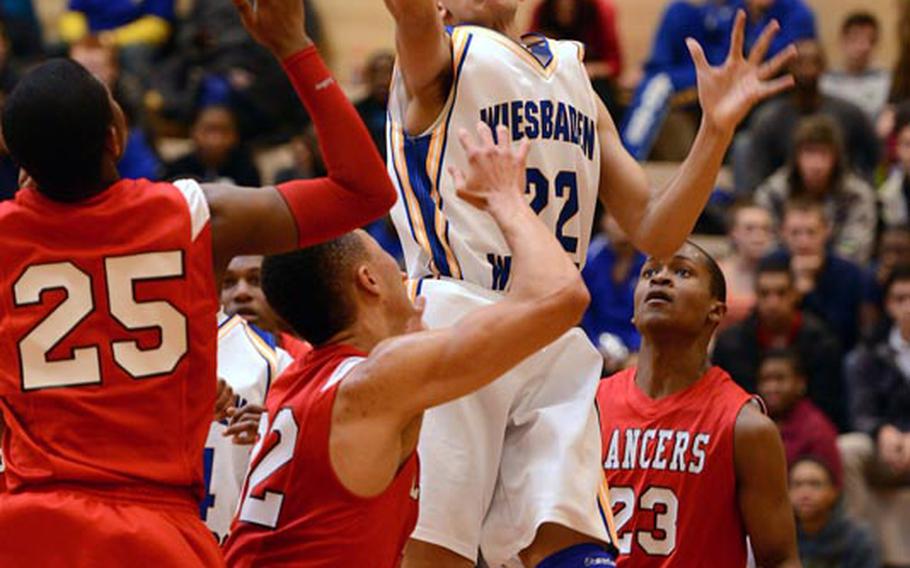 Wiesbaden's Kelsey Thomas gets between Lakenheath's Andre Bowser, left, and AJ Ransom for a shot in Saturday's game in Wiesbaden. The Lancers beat Wiesbaden 50-47. At far left is Albert Jones. (Michael Abrams/Stars and Stripes) The Panthers opened the trip with a workmanlike 57-47 win on Friday.

The win rejuvenates what has been an uneven start for the Barons, a strong second-place Division III finisher to Tre’von Owens and Rota a season ago. Two wins over Hohenfels and splits with Schweinfurt and Vilseck contributed to a 5-2 record entering the weekend’s set with the perennially strong Panthers.

But this weekend’s 1-1 performance is far more encouraging for Bamberg.

The Barons fell behind 14-7 in Friday’s first quarter, but settled in to play Patch to a near-draw for the balance of the weekend opener. That led to a stronger start Saturday in the form of a 26-19 halftime lead, and the Barons fought off a fourth-quarter rally.

John Robinson continued his remarkable consistency for Patch, scoring 20 points in each game.

AFNORTH 64/50, Brussels 32/36. The Lions had no trouble either home or away, winning Friday at Brussels and Saturday on their home court.

Nuri Karaca scored 17 points Friday and 22 on Saturday to lead AFNORTH, which made the most of a full-fledged roster after facing Lakenheath last weekend without a handful of key players. Karaca added 10 assists over the two games.

The Lions left their foe little room for optimism on either occasion, holding Brussels to single-digit points in the first and second quarters of each game.

Hohenfels launched an epic comeback effort in the final eight minutes, scoring 25 points to match its output from the previous three quarters. Vilseck’s 16-point lead through three quarters proved too much to overcome.

Rashad Adams scored 13, Jeffrey Davis 11 and Shawn Peebles 10 in a balanced effort for Vilseck, which avenged the 55-53 loss it suffered to Hohenfels on Dec. 7. The win also snapped a three-game losing streak.

Ramstein 51, Lakenheath 45. The Royals played their most accomplished game of the young season Friday in outlasting the visiting Lancers.

Sophomore Jesse Gray scored all of his team-high 14 points in the second half as Ramstein handed its fellow Division I championship contender its first loss of the season.

A quirky schedule has Ramstein just four games into its season, but its next one has been circled from the outset. The Royals host archrival Kaiserslautern on Friday night.

Baumholder 51, Bitburg 49. Friday at Bitburg, a pair of stars known mostly for their football exploits delivered a classic finish.

Bitburg’s CJ Evans tied the game in the final seconds with a three-point play, only to see it negated by Ben McDaniels’ game-winner moments later as the Division III Bucs escaped with a road victory over the Division II Barons.

McDaniels had 20 and Evans 15 to pace their respective teams.

ISB 42/38, SHAPE 37/27. The Raiders proved superior on both teams’ courts, winning Friday at home and Saturday at SHAPE.

Tim Overeem produced a pair of tidy double-doubles for ISB, notching 12 points and 14 rebounds Friday and 10 points and 13 rebounds Saturday. Conner Manning starred in defeat with 28 combined points on the weekend.

The wins brought an end to a three-game losing streak for the Raiders.

Florence 37/30, Marymount 36/52. At Marymount, the host Lions chased a heartbreaking one-point loss with a startling rout of their Region IV rivals.

Ziyad Nour poured in 36 points for Marymount on Saturday as his team sprinted to a 21-4 lead through one quarter.

Naples 64/47, Vicenza 53/55. At Naples, the anticipated showdown between undefeated Italian powers did not disappoint.

Neither team emerged with its pristine record intact as the Wildcats and Cougars took a break from recent lopsided wins to square off with an evenly-matched opponent.

Isaiah Wesby scored 25 in Friday’s opener as defending Division II champion Naples outscored Vicenza 29-8 in the final eight minutes. Cougar star LaScott Richardson matched Wesby’s 18 points in the Saturday rematch as Vicenza settled the score with a fourth-quarter surge of its own.

Lakenheath 50, Wiesbaden 47. Saturday at Wiesbaden, Lakenheath recovered from its first loss of the season by starting a new winning streak at the expense of the tough Warriors.

A day after losing at Ramstein, the Lancers returned to the win column behind 22 points from CJ Jackson and a long-range assault that yielded nine three-pointers.

With a healthy 7-1 record, the Lancers now head back to the U.K. for regional play before returning to the mainland for a run at the Division I title next month.

Black Forest 55/42, Ansbach 47/40. The Falcons won a pair of hard-fought decisions against the visiting Cougars.

Correction Bamberg's record and results with Hohenfels were incorrect in an earlier version of this article.