Homemade salsa and chips are free and prompt when you sit down at Azteca Mexican Restaurant in Honolulu. (Wyatt Olson/Stars and Stripes)

Homemade salsa and chips are free and prompt when you sit down at Azteca Mexican Restaurant in Honolulu. (Wyatt Olson/Stars and Stripes) 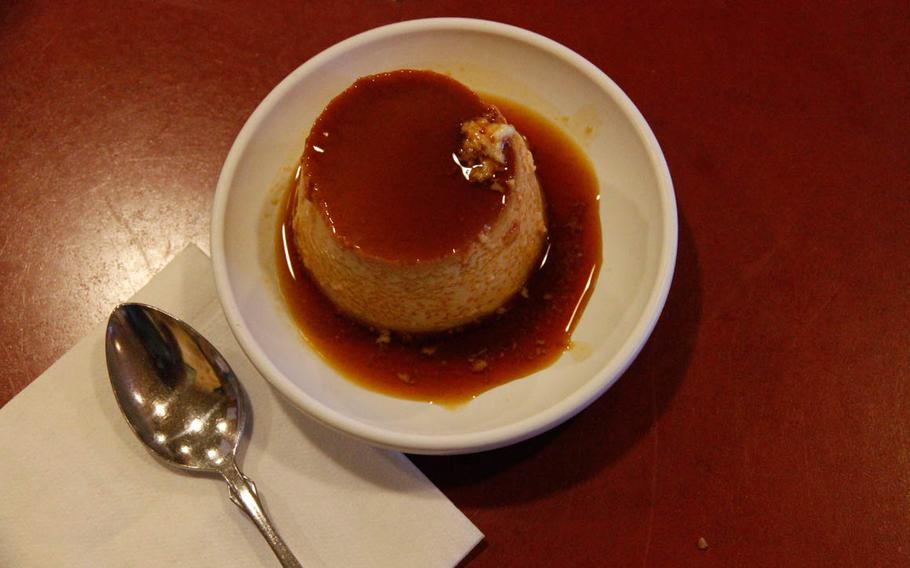 Flan, with its slightly sweet caramelized syrup, is the perfect dessert to top off a Mexican meal at Honolulu's Azteca. (Wyatt Olson/Stars and Stripes) 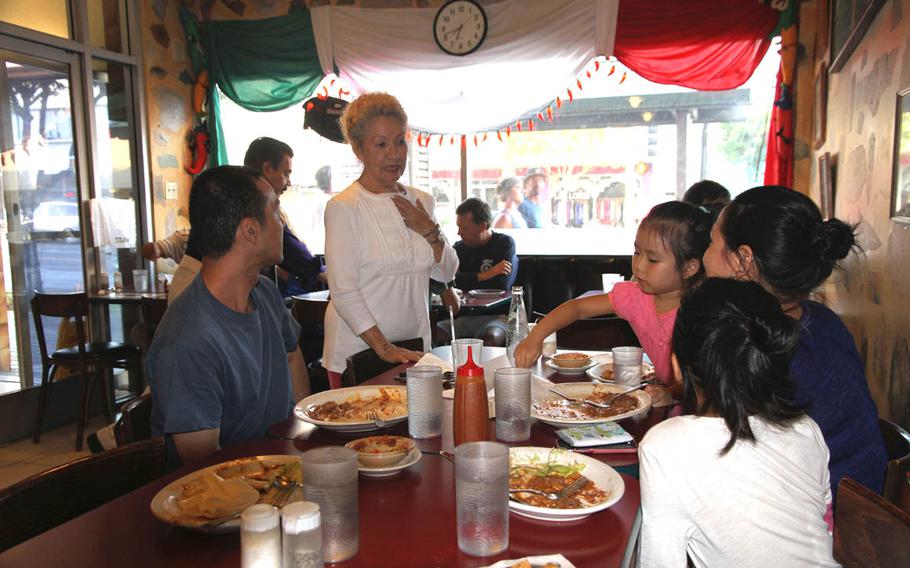 One of the owners of Azteca chats with a family as they finish their meal at the Mexican restaurant in Honolulu. (Wyatt Olson/Stars and Stripes) 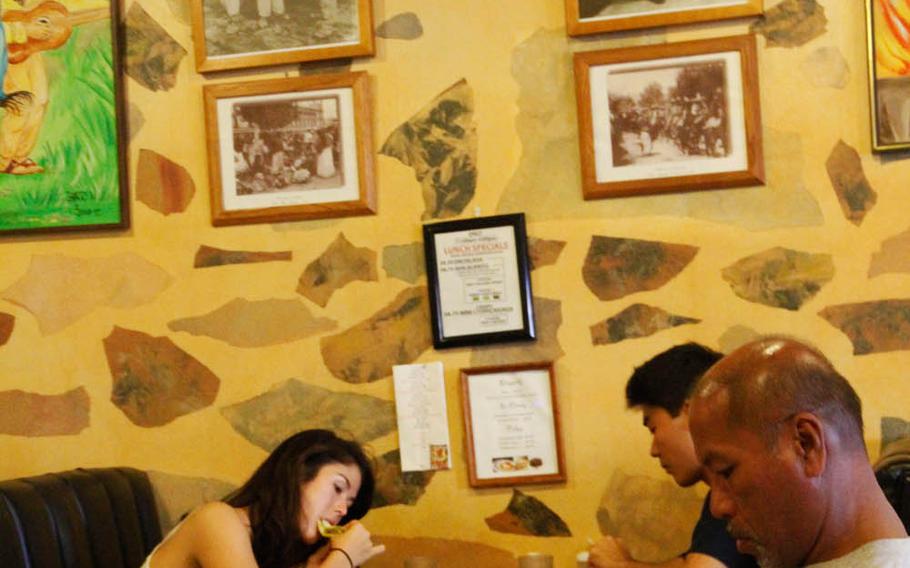 Famous -- and infamous -- figures from Mexican history loom above diners at Azteca Mexican Restaurant in Honolulu. (Wyatt Olson/Stars and Stripes) Azteca Mexican Restaurant is located in gentrifying Kaimuki, one of the oldest neighborhoods in Honolulu. (Wyatt Olson/Stars and Stripes)

A friend who’s a native Hawaiian now living on the mainland has one ritual he keeps each visit home: a meal (or two) at Azteca Mexican Restaurant.

Years ago he and his father started going to this small, family-owned restaurant in the Honolulu neighborhood of Kaimuki, one of the city’s oldest neighborhoods that is morphing into a trendy blend of funky shops and small cafes.

For him, it’s almost akin to dropping in at an aunt and uncle’s home for a favorite meal, one that must include a beef enchilada.

Azteca does have a homey feel to it, and its owners, of Mexican descent, know many of the regulars. They haven’t given in to some of the worst aspects of modern restauranteering — there are no TVs hanging from the walls, nor is there the caterwauling of stale oldies on satellite radio.

(On the other hand, Azteca has no website, which is a loss to the world.)

Moments after you sit down, the staff whisks a basket of warm tortilla chips and a bowl of homemade salsa to your table — at no charge. While that’s not uncommon in some parts of the mainland, in Honolulu, free chips and salsa is a rarity.

When we arrived on a recent Saturday evening, the staff was quite obliging to the baby on board in our group.

If you’re bringing kids, Azteca offers one huge bonus: the food comes out of the kitchen at astounding speed, so you won’t have to hear a single refrain of, “I’m hungry, when’s …”

That doesn’t mean ordering is quick, of course. As at many Mexican restaurants, the menu at Azteca is extensive, basically split into a la carte items and combination plates.

As an ode to my absent friend, we ordered the small verde beef enchilada ($10.75), which comes slathered with a creamy chili pepper sauce. The corn tortilla is filled with cheese and finely shredded beef. The smooth and tender beef does indeed have the makings for a classic “comfort food.” The enchilada came with ample portions of refried beans and rice.

Other sauces and fillings are available for the enchiladas, such as mole, which is a sweet-and-spicy salsa, and suiza, a smooth tomatillo salsa. There’s also an enchilada made with a creamy crab-filled sauce.

A large enchilada is $3.25 extra, but don’t order it unless you have an outsize appetite or plan to slice it up for a group. The small one is ample.

Of course, no meal at a Mexican restaurant would be complete without a burrito, and since we had the realm of beef taken care of with the enchilada, we went with the chicken burrito ($13), which came with sides of refried beans and rice.

It was obvious that the chicken had been freshly stripped from the bone after roasting. It was moist and flavorful. The flour wrap was also fresh.

We ordered one serving of flan at the end, too full to want more than just a bite of something sweet and light. The Mexican custard was fluffy but firm, and the lightly sweet syrup took the edge off the chili in the meal.

And lest we forget adult beverages, which go oh so well with Mexican food, Azteca has a full bar. Margaritas are mixed from scratch — another laudable and old-fashioned touch when so many Mexican restaurants have switched to premixed tanks.

A bevy of bottled Mexican beers are offered, including Tecate, Pacifico, Bohemia and Modelo Especial.

Notes: Visa and MasterCard accepted; no reservations, but food is served promptly and tables turn over relatively quickly.