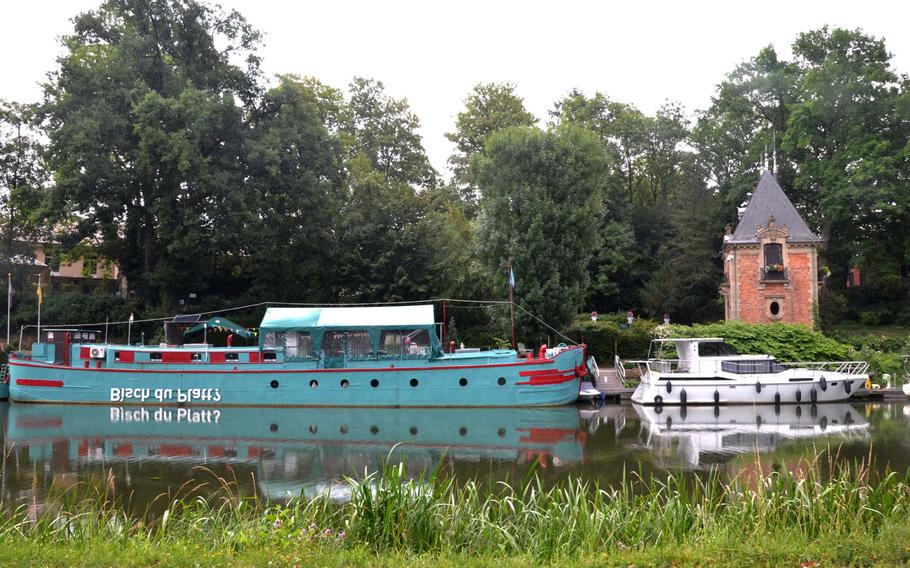 Buy Photo
The words ''Bisch du platt?'' (''Are you surprised?'' in the regional dialect) are reflected rightside-up in the water of the Saar River in Sarreguemines, France. The phrase is thought to be on the boat to urge locals to not allow their dialect to die out. (Karin Zeitvogel/Stars and Stripes)

Buy Photo
The words ''Bisch du platt?'' (''Are you surprised?'' in the regional dialect) are reflected rightside-up in the water of the Saar River in Sarreguemines, France. The phrase is thought to be on the boat to urge locals to not allow their dialect to die out. (Karin Zeitvogel/Stars and Stripes) 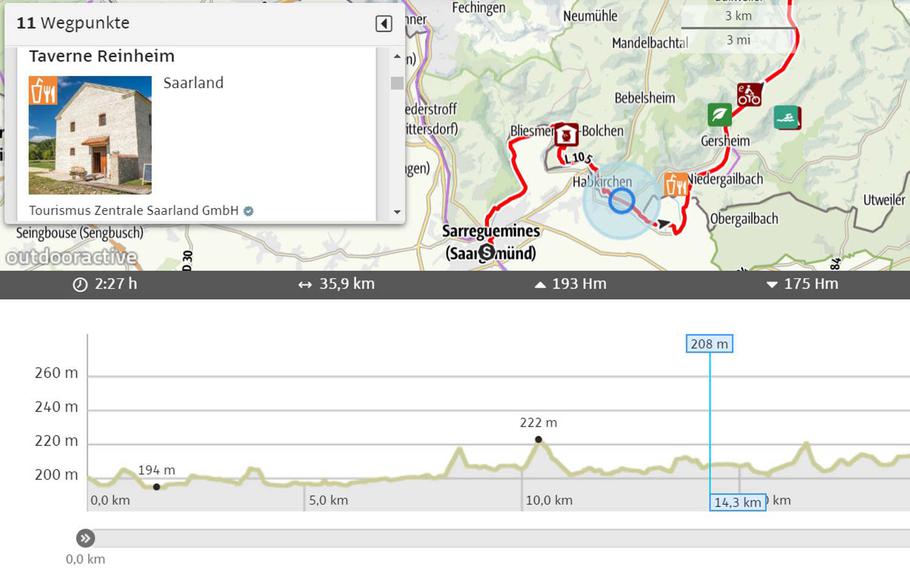 A map of the Glan-Blies cycle path stage between Sarreguemines, France and Blieskastel, Germany. Sliding the cursor along the graph at the bottom shows you distances, altitude changes and where along the path you would be. (Outdooractive) 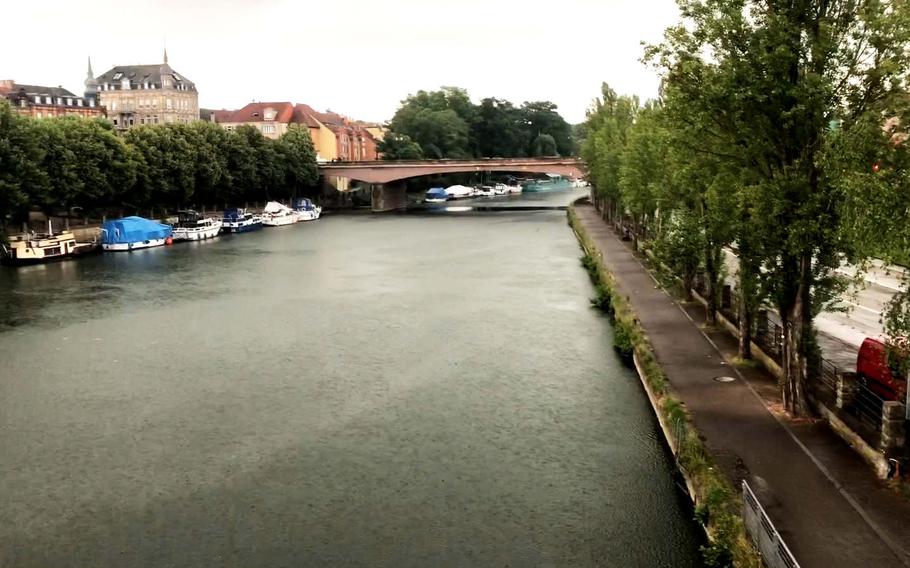 Buy Photo
The French city of Sarreguemines seen from a bridge that crosses the Saar River on Wednesday, June 17, 2020. The city is accessible by bike from Germany via the 80-mile Glan-Blies bike path, which runs past Ramstein Air Base as it wends its way through Rheinland-Pfalz and Saarland to France. (Karin Zeitvogel/Stars and Stripes) 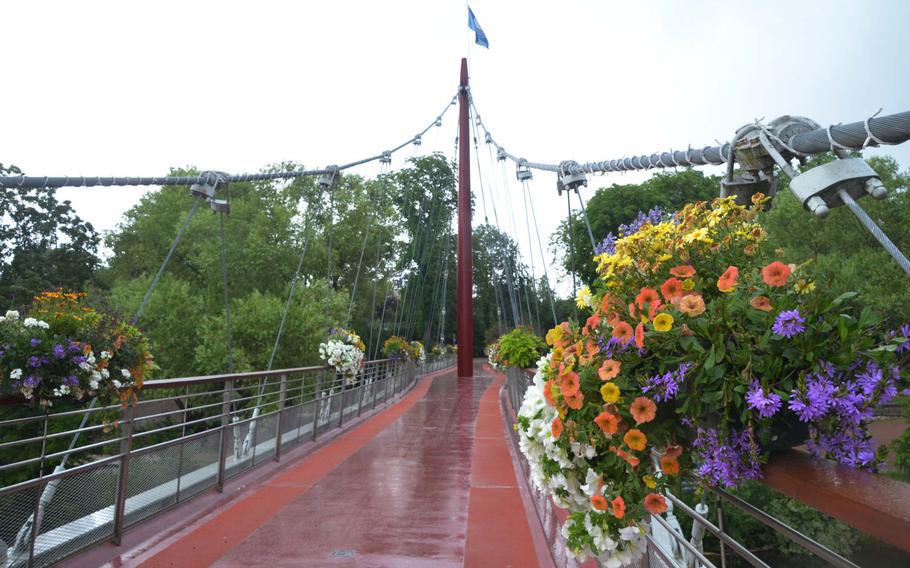 Buy Photo
The pedestrian bridge across from the tourism office in Sarreguemines, France, on Wednesday, June 17, 2020. A bike path on one side of the bridge runs 80 miles through Saarland and Rheinland-Pfalz in Germany, passing near Ramstein Air Base. (Karin Zeitvogel/Stars and Stripes) 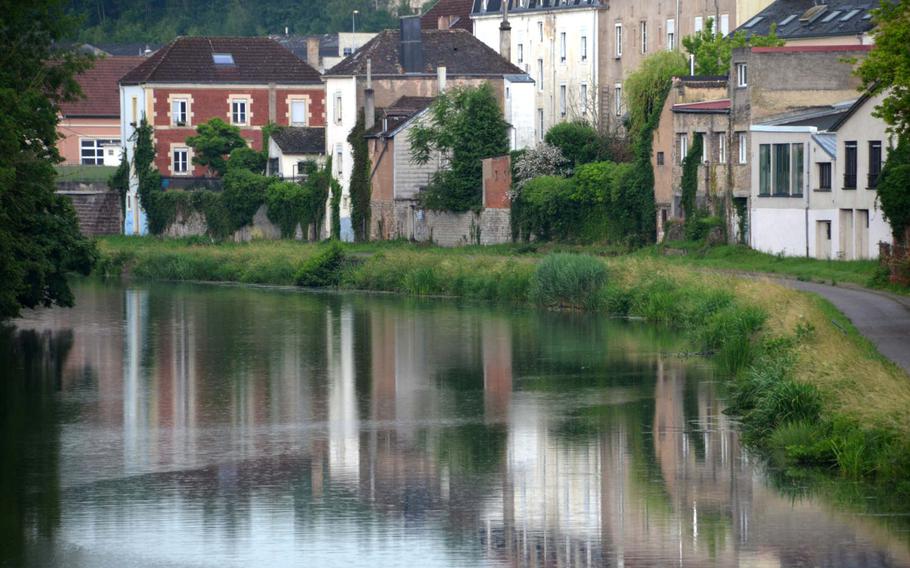 Buy Photo
Houses in Sarreguemines, France, reflect in the Saar River on Weds., June 17, 2020. Sarreguemines is at the western end of the 80-mile Glan-Blies bike path, on the right in the picture, which runs from Staudernheim, north of Kaiserslautern, Germany, to Sarreguemines. (Karin Zeitvogel/Stars and Stripes) 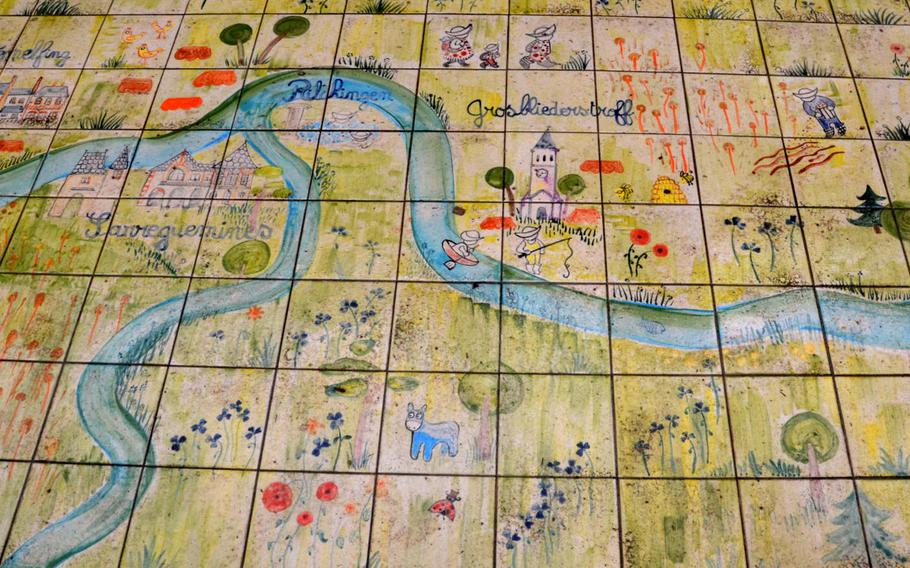 Buy Photo
A map made of ceramic tiles that lies near the part of the Glan-Blies bike path that runs through Sarreguemines, France. Sarreguemines is known for ceramics. (Karin Zeitvogel/Stars and Stripes) Buy Photo
A map made of ceramic tiles lies to one side of the bike path that runs past the center of Sarreguemines, France. Sarreguemines is known for its ceramics. (Karin Zeitvogel/Stars and Stripes) 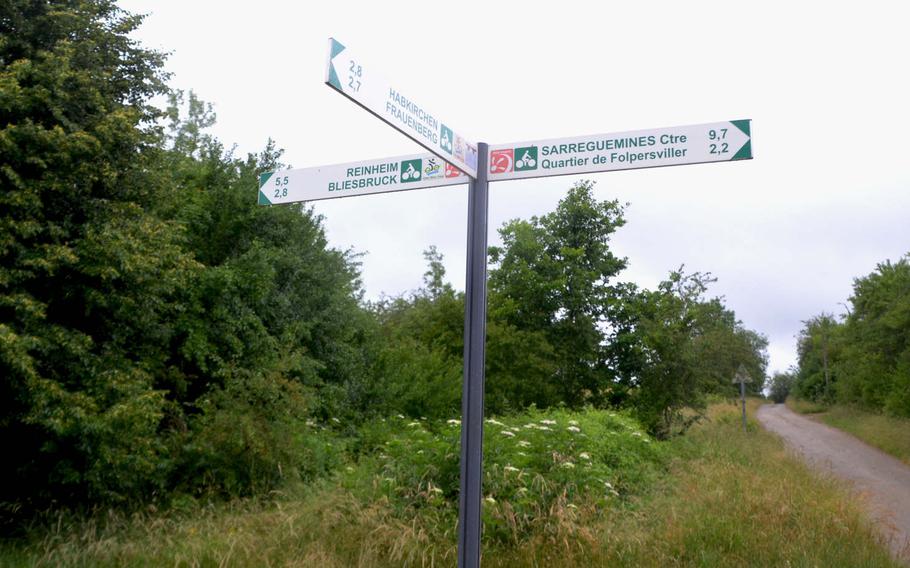 Buy Photo
Signs in a village on the border between Germany and France point in different directions, indicating bike paths and where they lead. In some villages, the signs are much smaller and less informative. (Karin Zeitvogel/Stars and Stripes) 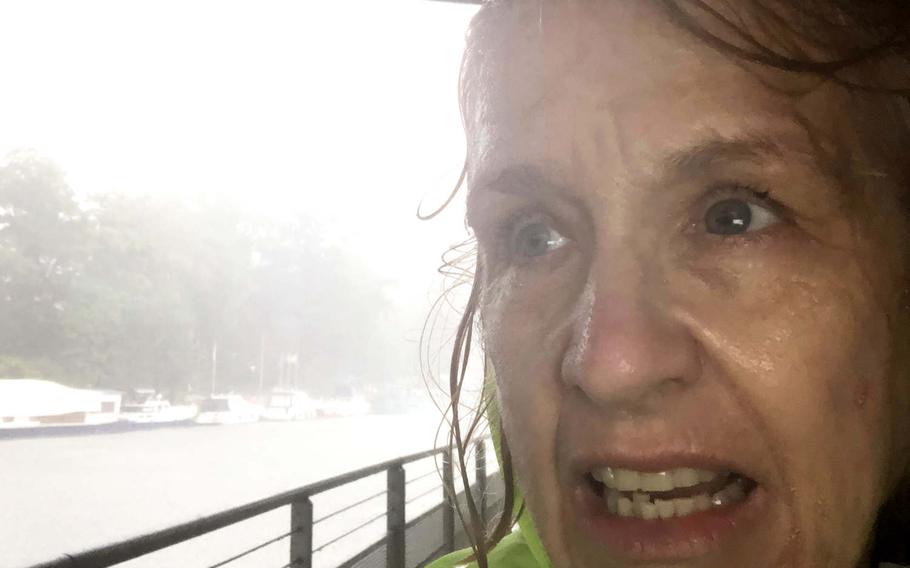 Buy Photo
Sheltering under a bridge on the Glan-Blies bike path in Sarreguemines, France during a rainstorm on Wednesday, June 17, 2020. The bike path runs for 80 miles from Staudernheim, north of Kaiserlautern, Germany, to Sarreguemines. (Karin Zeitvogel/Stars and Stripes)

After a trip to Paris fell through because of the coronavirus and I’d ruled out indoor activities over fears that people might get closer than Germany’s socially allowed 1.5 meters, I looked to the great outdoors to find something to write about for this column.

That’s how I learned about the 80-mile Glan-Blies bike path.

Starting in the Rheinland-Pfalz town of Staudernheim, about 30 miles north of Kaiserslautern, the trail wends its way along two rivers, the Glan and the Blies, through German wine country to Sarreguemines, a small city just inside France that’s known for its ceramics.

Riding too far was out of the question — I no longer own padded bike shorts and don’t have the miles in my legs. But several websites, including outdooractive.com, have broken the ride into stages, the longest of which is about 25 miles. They suggest starting in Sarreguemines and heading east along the Blies, a tributary of the Saar River.

But France had just reopened its borders and I wanted to do a socially distanced visit to Sarreguemines. So I hatched a plan to ride to France from the German village of Habkirchen. Outdooractive said that would make for a round-trip ride of about 18 miles.

Finding parking in Habkirchen was easy; finding signs for the bike path wasn’t. When I did find some, they didn’t say Glan-Blies Radweg but Saarland Radweg. They also didn’t say if they led to Blieskastel, the suggested endpoint for the first stage, or Sarreguemines. But I set off anyway in the direction the signs were pointing.

Nothing was looking very French and when I reached the orchid-growing area near Gersheim — one of the places worth stopping at, according to Outdooractive — I knew I’d gone the wrong way. So I turned around and rode six miles back to Habkirchen and came up with a new plan: I’d drive to Sarreguemines, park at the train station as suggested by the websites I’d consulted, and then ride into Germany and back.

I thought the bike path would be easy to find from Sarreguemines’ train station, but I was wrong. So I headed to the tourism office, opposite a flower-lined pedestrian bridge spanning the river, to ask where it was.

They were closed. It was 2:45 p.m. Probably a long French lunch, I thought.

Rain was starting to fall but, undeterred, I headed to the bridge and found a bike path that followed the river. Signs along the path showed little green bikes. One sign mentioned Blieskastel, so off I pedaled.

I hadn’t gone half a mile when the heavens opened. After sprinting to shelter under a nearby bridge, I watched as the rain caused a 10-minute white-out and tried to ignore the pungent smell of runoff from the roads that was gushing into the river.

When the downpour eased a little, I rode back to the car. Vehicles on the road above me washed mini-tsunamis onto the bike path. I was soaked through as I toweled off the bike, put it in the car and then got into the driver’s seat. There, with the air vents pointed toward my sodden shoes and clothes, I turned the heat on full blast.

As I began to warm up, one weird thought kept entering my mind: I really have to do this again. But maybe on a sunny day.

DIRECTIONS:Outdooractive.com has an overview of the trail and a breakdown of suggested stages in English. If you click on a map on their site, it will open a bigger map and a graphic. Drag your cursor along the bottom of the graphic and the circle that moves along the map above it will show where you would be and how far you’ve ridden or have left to ride. Online: tinyurl.com/y7kjlwp4

The path passes close to Ramstein. Good starting points from the base would be Niedermohr, Nanzdietschweiler or Waldmohr.

Part of the trail between Habkirchen and Sarreguemines was closed in mid-June because of subsidence. The detour took you along a country road with light traffic, and included a steep climb if you were riding toward Sarreguemines.

If you end your ride at Blieskastel, Homburg or Glan-Muenchweiler, you can take a train back to your starting point. If you ride all the way to Sarreguemines, you might want to arrange for someone to pick you up there — not all French trains accept bikes.

COSTS: Parking at the tourist office in Sarreguemines was 60 cents an hour. The machine took a U.S. credit card. Free parking is easy to find in Habkirchen.

INFORMATION: Things to do in Habkirchen besides cycling: The Ceramic Museum in Sarreguemines has everything from decorative peacocks to gaudy toilets and is free to visit until mid-July. You’ll need a face mask. Online: sarreguemines-museum.eu/musee-de-la-faience. Two miles from the train station and tourism office, there’s a shopping center with a Cora supermarket and a Decathlon sports shop.

The orchids at Gersheim were not visible from the road. For information and to make an appointment to see them, email hfrenzel@gersheim.de.