This undated photo shows items confiscated from the home of a U.S. soldier suspected of manufacturing and distributing Spice. (Courtesy Gyeonggi Provincial Police)

This undated photo shows items confiscated from the home of a U.S. soldier suspected of manufacturing and distributing Spice. (Courtesy Gyeonggi Provincial Police) 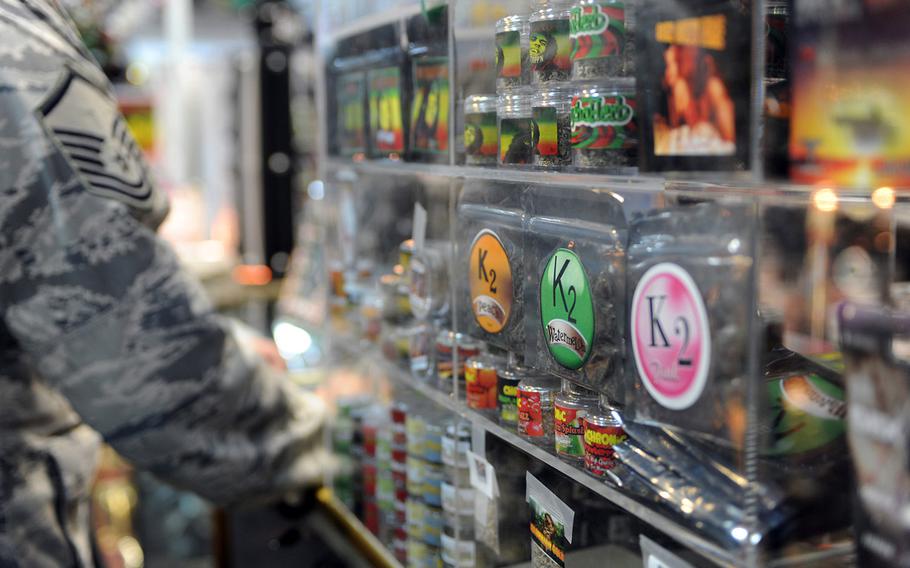 An Airman passes a spice display in a local smoke shop prior to a Nov. 24 ban by on the substance by the Drug Enforcement Agency. Spice and other mood-altering substances are banned by the Air Force, but were legal to sell in the civilian community until the DEA used its emergency powers to implement a one-year ban of the substance. (U.S. Air Force photo illustration)

The allure of synthetic marijuana. or Spice, lies mostly in its chameleon-like chemical blends that make it difficult to test.

By the time law enforcement officials have identified a compound and developed a test for it, the chemists who produce these synthetic cannabinoids have changed their recipes or created new compounds.

Since the drug first became popular in the mid-2000s, law enforcement officials have been one step behind.

But that could soon change.

Army researchers are in final stages of constructing a portable handheld device that harnesses the body’s reaction to all synthetic cannabinoids. It will be the first field-ready Spice detector, and Army officials hope to have a working prototype by the end of 2014.

Spice testing is of particular interest for the military. According to a study due out in July from the University of Washington, Spice is the most-abused substance among active-duty Army personnel.

At first, the tester will be used to tell investigators whether a substance they have located is Spice, or at least contains synthetic cannabinoids. Investigators currently don’t have the tools to do field tests. All samples from within the Defense Department are sent to the U.S. Army Criminal Investigation Laboratory for evaluation and forensic investigation, creating a considerable backlog and long wait times for results. A servicemember might have Spice but not be charged if the substance contains compounds that the laboratory can’t test for.

“These laboratory tests can be very time-consuming, and the magnitude of the samples coming in has created quite a workload,” Griep said. “This sensor would provide an initial screening mechanism to cut out any samples that don’t contain synthetic cannabinoids,” so they don’t go to the lab.

Once the spice detector is in the field, Griep hopes to improve it so findings meet the forensic standards for legal prosecutions. Marine Corps officials in Okinawa, where spice usage was first identified by the Navy in 2008, said that would be a game changer. Most Marines caught with Spice are administratively separated instead of court-martialed, especially overseas, due to costs and logistics of flying lab technicians in for testimony. Forensic testing would eliminate the need for such considerations.

How it works The tester works by harnessing the power of the human body, Griep said. All synthetic cannabinoids bind to cannabinoid receptors in the body and cause a reaction when these compounds are introduced.

The detector mimics this process by using the same receptors that are in the human body, so the device alerts investigators when a reaction occurs -- meaning that synthetic cannabinoids are present in the sample.

“So if it’s going to cause an effect in your body, then this sensor will potentially detect it,” Griep said.

The U.S. Army Research Laboratory’s prototype biosensor model comes at a time when about 1 percent of military personnel may be using synthetic marijuana, according to the Defense Department.

The compounds are dangerous because they are unlabeled and unregulated.

“It’s really quite dangerous, especially for kids,” said DEA spokesman Joseph Moses. “It presents a huge challenge for the DEA and law enforcement in general.”

It is hard to quantify how many servicemembers have been arrested, convicted or separated for Spice use or possession. The Army does not keep statistics on separations due to Spice usage; however, investigators positively identified Spice, bath salts or other synthetic substances in 1,263 cases in fiscal 2013, down from 1,675 a year earlier. These cases often involved multiple individuals. Air Force officials did not respond to repeated requests for information.

Between fiscal years 2012 and 2014, the Navy saw a 430 percent increase in the number of samples sent for analysis, from 11,840 to 62,859, Navy officials said. However, they said that is due to certain synthetic cannabinoids being added to their standard testing panel for urinalysis in December 2013.

The most notable cases for the Navy occurred in 2011 when 64 sailors were busted for Spice on the USS Carl Vinson, and 28 were arrested on the USS Ronald Reagan.

During the briefing for newcomers at Marine Corps base Camp Foster in Okinawa, officials warn servicemembers about Spice, which is prevalent in Japan despite steps taken by the Japanese government to limit its use.

Marine officials in Okinawa reported 56 “spice incidents” in 2011, according to Col. Peter Rubin, staff judge advocate for Marine Corps Installations Pacific in Okinawa. This could mean anything from someone being caught with Spice, admitting to its use or reporting seeing someone else possessing or using Spice. The number of incidents dropped to 46 in 2012 and 29 in 2013. There have been seven cases this year.

From 2011 until now, no Marines from MCIPAC and III Marine Expeditionary Force have tested positive for Spice in urinalysis tests, Rubin said.

“It appears to be going down but sometimes it’s hard to tell,” he said, “ It’s not to the level that I would consider a major problem or concern.”

Rubin believes Marines are getting the message about Spice, and says that the Marine Corps will continue to use any means necessary to root out abuse.