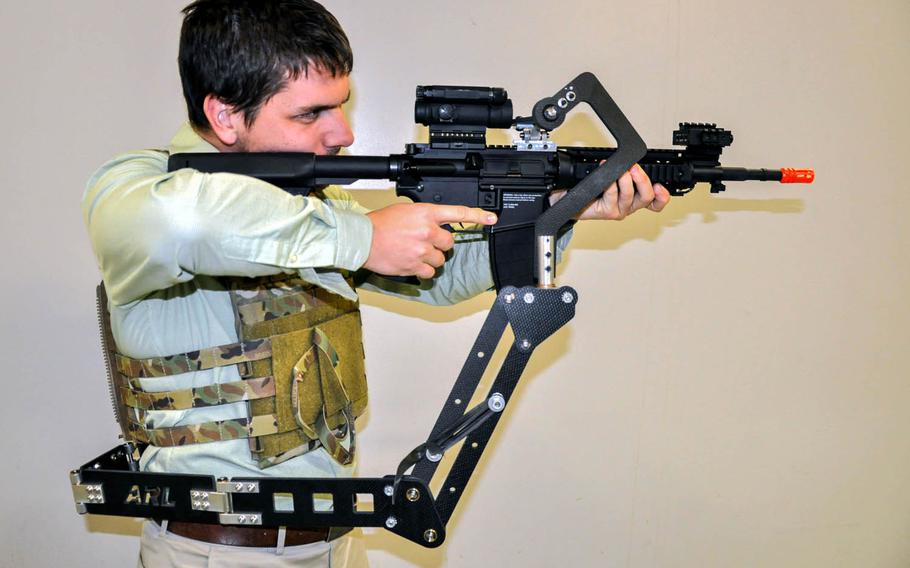 The Army Research Laboratory in Maryland is developing a passive mechanical appendage that could lessen soldiers' burden. (Courtesy of the U.S. Army)

Soldiers may one day be equipped with a mechanical third arm to lessen the burden of heavy weapons and free their hands for other tasks.

With the weight of firearms expected to increase with improving technology, the Army is testing out a body-worn gun mount as a possible solution, officials said in a statement.

The passive mechanical appendage, which looks like something out of an “Inspector Gadget” cartoon, is made of a carbon-fiber composite weighing less than 4 pounds and attaches to soldiers’ protective vests.

“We’re looking at a new way for the soldier to interface with the weapon,” Zac Wingard, a mechanical engineer for the Army Research Laboratory’s Weapons and Materials Research Directorate, told the Army News Service. “It is not a product; it is simply a way to study how far we can push the ballistic performance of future weapons without increasing soldier burden.”

Testing is underway at the lab and at Aberdeen Proving Ground in Maryland using M4 carbine rifles, the Army statement said. Soldiers wear sensors measuring muscle activity to determine if there’s a change in fatigue when shooting with the device.

“Imagine shoulder-firing [weapons] without the weight on your arms, and without all the recoil going into your shoulder,” mechanical engineer Dan Baechle told the news service.

Future testing will include different weapons and fighting techniques, such as shooting around corners, and will eventually lead to heavy field testing, the statement added.