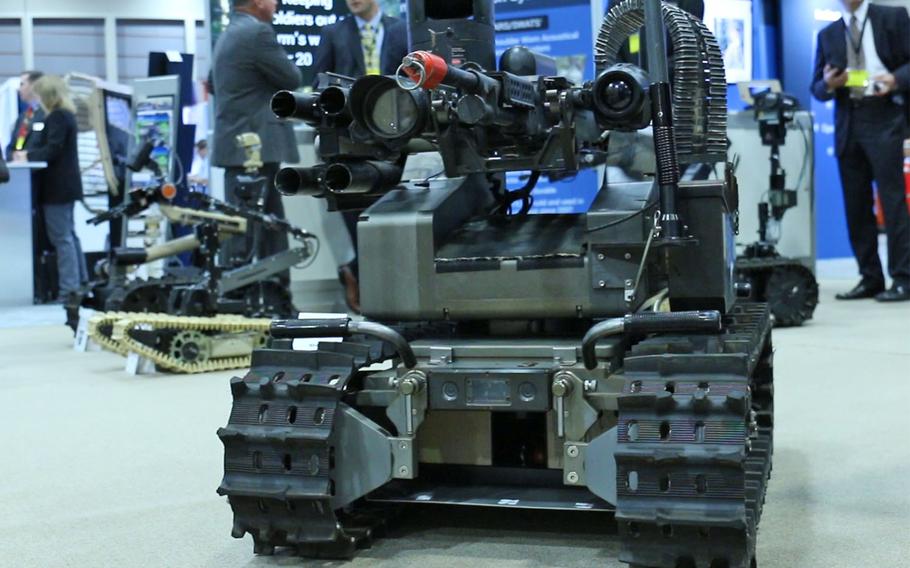 Buy Photo
Hi-end military technology was the focus at the 2017 Association of the U.S. Army Meeting and Exposition, held in Washington, D.C., from Oct. 9-11, 2017. (Michael S. Darnell/Stars and Stripes)

WASHINGTON — The Army is buying hundreds of ground robots that could bolster the way soldiers respond to nuclear, biological and chemical threats.

More than 1,200 Man Transportable Robotic System Increment II robots from Endeavor Robotics are included in the $100 million contract, which has an option for an additional $58.5 million.

The MTRS is part of the Army’s effort to standardize robotic systems in order to ease logistics and program-cost burdens from fielding too many separate robots — each with its own operating system and maintenance requirements.

“During recent conflicts, the Army purchased more than 7,000 unique robotic systems,” Bryan McVeigh, the Army’s project manager for force projection, said in a press release about the contract, awarded in September.

“That gave soldiers the capabilities they needed, and it was the right thing to do for the mission. But we bought unique systems that weren’t very flexible,” McVeigh said. “The robots often had just one capability; used expensive, proprietary software; and required more resources for training and maintenance.” Those robots don’t communicate with each other.

“What this program gives us is a common, reliable chassis that can adapt quickly and take on the role of multiple existing systems. That means soldiers can do more while learning and carrying less — and that makes a big difference,” McVeigh said.

Endeavor Robotics CEO Sean Bielat declined to give many details about the MTRS other than it weighs about 160 pounds, is tracked to travel rough ground, has a manipulator arm for precision work like bomb disposal, and will be controlled by a touchscreen pad.

He said the Army requirements of the bid state that the primary use for the unmanned ground vehicles “will be to detect and confirm potentially lethal threats, such as IEDs, chemical hazards and other biological, radiological and nuclear ... situations.”

“We had our roots with 9/11,” Endeavor Robotics representative Jeff Ostaszewski told Stars and Stripes at the 2017 Association of the U.S. Army conference Monday. “We had a prototype we were working on. Not necessarily the buildings that collapsed, but some of the surrounding buildings, maybe a little unstable, and you can’t send a human in to see if someone is still in there. It was an opportunity for the robot to be used. They sent one of our prototype Packbots in. The company grew from there.

“This is the crux of it: Send a robot in where you don’t want to send a human,” he said.

Endeavor Robotics has robots in use by militaries, law enforcement and other civilian agencies in 43 countries. Some of their military models include small 5-pound tracked vehicles with infrared cameras that can be tossed through a second-story window and can right themselves with extendable flippers if they flip over. Others are capable of climbing steps, curbs and obstacles.

Robots have long been used for bomb detection and disposal and for investigating dangerous locales. Robots made by Endeavor played a key role in the aftermath of the 2011 Fukushima disaster, when a tsunami in Japan severely damaged a nuclear power plant and led to the release of radioactive debris. Endeavor’s Packbot and Kobra tracked robots used their extendable arms to move debris out of the way as they deployed radiological sensors to map radiation levels.

The disaster led the Japanese government to create an exclusion zone around ground zero of the disaster area. The intense radioactivity inside the reactor building has made robots vital to monitoring the site, and Endeavour’s Packbot and Kobra models are still in use there today.

The company’s record of using robots to monitor nuclear sites takes on importance with rising nuclear tensions between the U.S. and North Korea. Severe chemical, biological and nuclear contamination zones in a potential conflict with North Korea could require the use of unmanned systems like the MTRS.

Secretary of Defense Jim Mattis said in a speech at the AUSA convention that the Army needs to be ready for any confrontation that might arise with North Korea.

“Now, what does the future hold? Neither you nor I can say,” he said. “So there’s one thing the U.S. Army can do, and that is, you have got to be ready to ensure that we have military options that our president can employ, if needed.”