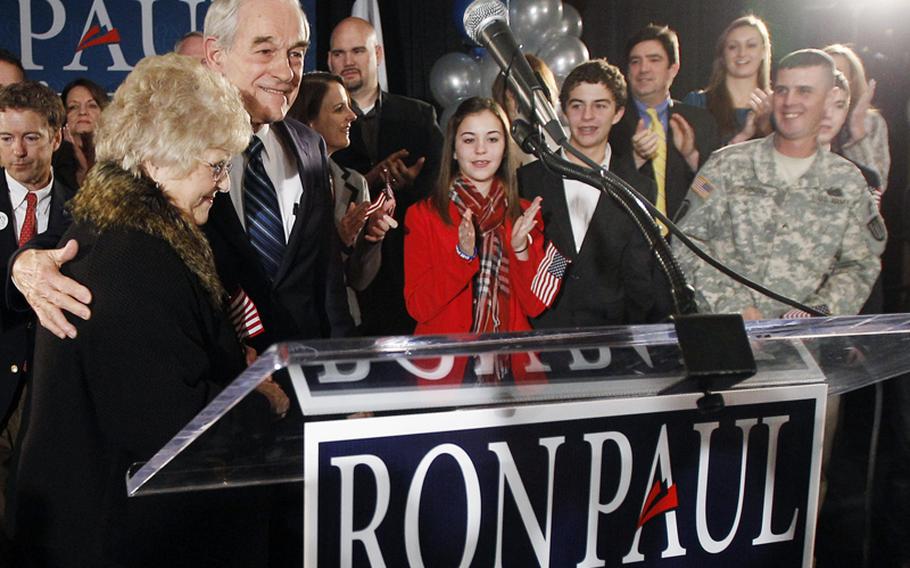 WASHINGTON &mdash; An Army reservist who gave a public endorsement of presidential candidate Ron Paul during a televised rally in January will receive only a letter of reprimand for violating military politicking rules.

Spc. Jesse Thorsen, who also appeared on CNN speaking on Paul&rsquo;s behalf that night, was not on duty but was in uniform at the time of the incident. Army reserve officials said Thorsen&rsquo;s actions clearly violated Defense Department rules, and that the reprimand has been placed in his personnel file.

The punishment came just one day after Marine Corps officials announced they will seek the dismissal of a sergeant for violating those politicking rules by using Facebook to criticize President Barack Obama.

Sgt. Gary Stein faces an administrative separation board this weekend to determine if he can keep his job. He has publicly stated that his comments questioning Obama&rsquo;s authority should be protected free speech, but service officials insist they violate rules against maligning the commander-in-chief.

In comparison to that, Thorsen&rsquo;s punishment appears light. On Thursday, hours after receiving word from his command about the punishment, Thorsen appeared on an online radio show run by the group Combat Veterans for Ron Paul titled &ldquo;Language of Liberty,&rdquo; defending his actions but also saying he cooperated with the Army&rsquo;s investigation.

&ldquo;The Army works for Congress,&rdquo; he said during the show. &ldquo;If a Congressman invites you up on stage, doesn&rsquo;t he have the right to do that?

&ldquo;Why can&rsquo;t a combat veteran go up on stage and support a presidential candidate in his best suit, which is his American uniform?&rdquo;

On the night of the Iowa caucuses, Thorsen gave a short interview on the television news station about why he supported Paul for president.

Later, in a post-caucus rally, Paul identified Thorsen as a 10-year soldier who &ldquo;has been with us in our campaign for a few years,&rdquo; and invited the reservist on stage to tell the crowd why he supports the candidate&rsquo;s foreign policy plans.

Thorsen, 28, has only been in the reserves for three years. He was deployed in 2009 in support of Operation Enduring Freedom.

Campaign and military officials incorrectly reported him as a corporal when the controversy broke in January, and reserve officials emphasized he was not demoted as part of his punishment.

Thorsen told the show hosts that some leaders in his unit had pushed for a much harsher punishment, but he was &ldquo;more than pleased&rdquo; with the result.

&ldquo;Let&rsquo;s be frank &ndash; It basically says, &lsquo;You&rsquo;ve been a real bad soldier, don&rsquo;t do that again.&rsquo;

Supporters of the reservist on Facebook celebrated news of the reprimand, calling it a victory for free speech and the Paul campaign.

Thorsen said the investigation and punishment were &ldquo;absolutely worth it&rdquo; because &ldquo;it gave me the platform to spread the message of liberty and constitutional freedom to more people.&rdquo;

The incident also prompted military officials to re-issue their election-year guidance to all troops to remind both military and Defense Department civilians of the politicking rules.