Army orders soldiers into isolation after returning from Ebola mission 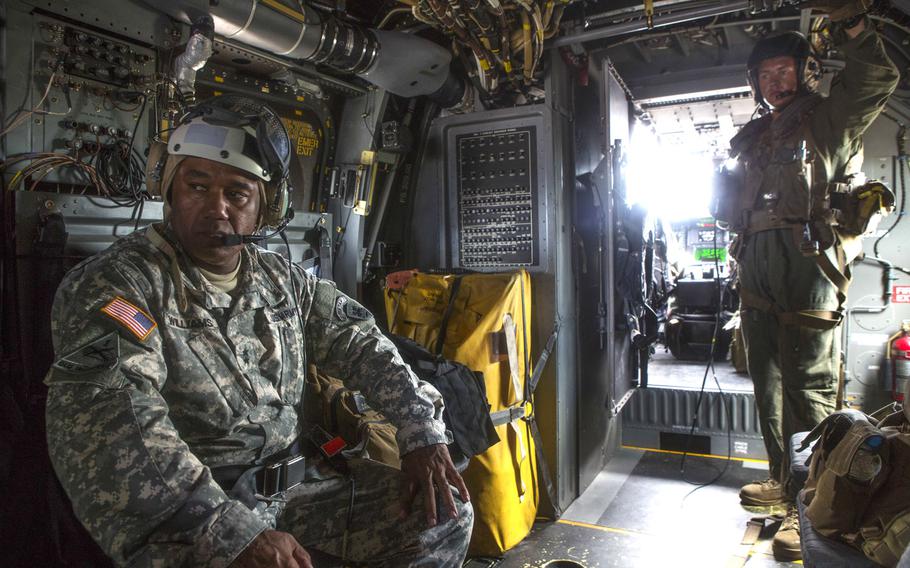 U.S. Army Maj. Gen. Darryl Williams, commander of Joint Force Command Operation United Assistance, sits inside of a U.S. Marine Corps MV-22B Osprey before taking off to conduct an aerial reconnaissance of the area in support of Operation United Assistance in Monrovia, Liberia, Oct. 11, 2014. Williams is among soldiers ordered into medical isolation upon returning from the mission to combat an Ebola outbreak in Africa. (Andre Dakis/U.S. Marine Corps)

WASHINGTON — Army Chief of Staff Gen. Ray Odierno has ordered apparently healthy U.S. soldiers returning from a mission to combat Ebola in Africa into medical isolation amid growing fears about the spread of the disease, the Defense Department announced on Monday.

The quarantine order exceeds the requirements of a recent DOD policy on Ebola exposure, reflecting ongoing uncertainty at the Pentagon about how to deal with fears that the outbreak, which has killed almost 5,000 people, could expand to the United States and elsewhere.

Among the 12 troops so far subjected to the Army’s “enhanced monitoring” order is Maj. Gen. Darryl Williams, commander of U.S. Army-Africa, who handed over command of Operation United Assistance and returned to Vicenza, Italy, in recent days. “Several dozen” more will arrive soon from Liberia and will also be kept away from family and other military personnel, Pentagon spokesman Col. Steve Warren told reporters.

The troops are in isolation in a facility at Caserma Del Din in Vicenza, an Army official said. The base was opened last year to house the 173rd Airborne Brigade Combat Team.

Warren said he was avoiding using the term “quarantine” because he said it has specific medical meanings. The 21-day isolation order, which was issued by the Department of the Army, was made out of “an abundance of caution,” Warren said.

“None of these individuals have shown any symptoms of exposure,” he told reporters. “There have been no incidents that lead us to that concern… That said, obviously they’ve been in Liberia for some time now.”

Odierno’s order was meant to show the department is taking Ebola safety seriously, according to the Army.

“He has done this out of caution to ensure soldiers, family members and their surrounding communities are confident that we are taking all steps necessary to protect their health,” the Army said in a statement.

Williams arrived in Liberia in mid-September to oversee the U.S. operation to combat the virus, which has since grown to about 700 U.S. troops providing mainly logistical and engineering support. More than 3,000 more could soon be headed to the country to assist.

In a satellite briefing from the Liberian capital, Monrovia, earlier this month, Williams said he had been traveling around the country to oversee the building of Ebola treatment units as well as the operations of several mobile laboratories conducting blood tests of those suspected to have the virus.

Williams said that in addition to following strict hygiene regimen, he and his troops were not in contact with Ebola patients and were avoiding close physical contact with locals. As a result, the troops face “very low to no risk,” Williams said.

More troops will be returning to Vicenza in the coming days, and they will be subject to the same isolation protocols, according to Warren.

Warren said he thought soldiers who return directly to the United States after completing their deployments to West Africa will also be isolated, but deferred to Army officials on those decisions. Army officials did not immediately reply to requests for information on the quarantine order.

Troops from bases throughout the U.S. are slated to participate in United Assistance in the coming months.

The Army’s decision appears to go beyond the requirements of a recently-released DOD policy that governs post-deployment monitoring of troops coming home from Ebola-ravaged zones.

The Oct. 10 memo from Jessica L. Wright, undersecretary of defense for personnel and readiness, requires 21 days of quarantine for individuals evacuated from theater because of “elevated exposure risk.” But those who have faced no known exposure are required only to submit to an interview to check for symptoms and twice-daily temperature monitoring by unit leaders or healthcare personnel.

A decision by governors of Illinois, New Jersey and New York to institute quarantines for aid workers returning from Ebola-stricken West Africa drew criticism from Obama administration officials that the measures weren’t grounded in science.

Warren said any decision to implement the Army’s tighter restrictions force wide would be made by Secretary of Defense Chuck Hagel.

“We’re continuously reviewing our policies,” Warren said. “This is an evolving situation.”

“As needed, they will continue to put in place polices they believe best protect member of the military and members of the public back here in the United States as well,” he told reporters Monday. “It’s clear … that the Department of Defense policy has not been settled and implemented yet … That will be a decision that’s driven by a variety of operational factors.”