Army mission in Europe grows, but for how long? 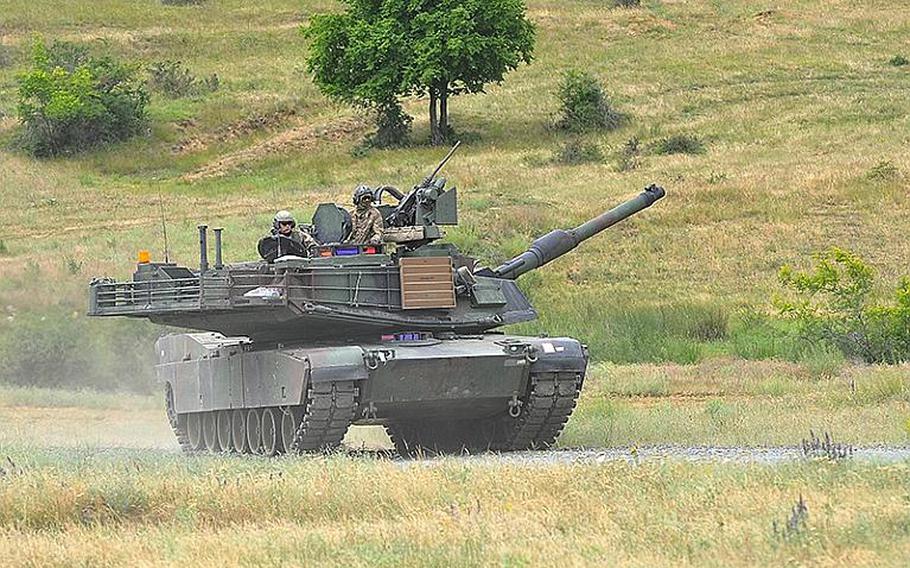 A U.S. Army M1A2 Abrams tank, manned by soldiers of the 3rd Combined Arms Battalion, 69th Armor Regiment, rumbles across Novo Selo Training Area, Bulgaria, following a live-fire exercise that closed the Kabile 2015 tactical exercise at Novo Selo on Thursday, June 25, 2015. No service has been affected more than the Army since Russia's 2014 intervention in Ukraine. (Michael Abrams/Stars and Stripes)

In Europe, a resurgent Russia, wary allies and a military mission to be definedIn Africa, terrorism dominates a resource-challenged mission STUTTGART, Germany — Before Russia’s intervention in Ukraine in 2014, the Army mission in Europe was in fast decline.

Two of the Army’s four brigades — about 8,000 soldiers — were moved out of Europe a year before Moscow’s move on Ukraine, along with the Army’s last remaining 22 battle tanks.

At the time, skeptics of the U.S. military mission in Europe, including some members of Congress, were demanding deeper cuts, calling into question the long-term viability of forces on the continent.

But when Russian troops marched onto Ukraine’s Crimea Peninsula, military leaders at NATO headquarters were alarmed and the U.S. military mission in Europe was again relevant.

No service has been affected more than the Army, which has received the bulk of increased military spending in Europe to augment its presence along Russia’s periphery in places such as the Baltics.

“The Army is really attached to the Russia threat, not just as a mission, but fundamentally as an opportunity,” said Michael Kofman, a security analyst with the Wilson Center think tank in Washington.

In 2017, the Pentagon will move a brigade’s worth of armored vehicles and artillery — a typical armored unit has about 90 tanks and 130 Bradley Fighting Vehicles — as the military attempts to add firepower in Europe. That will cost the Pentagon about $1.9 billion, more than half of the $3.4 billion expected to be spent next year in Europe.

Increased troop rotations will cost $1 billion, with the Army expected to eat up most of those funds with the additional brigade rotating through Europe. That means the Army in Europe will have a full-time rotational brigade year-round in the region. Only two brigades are permanently stationed in Europe — the 173rd Airborne in Vicenza, Italy, and the 2nd Cavalry Regiment in Vilseck, Germany. In all, the Army maintains a force of 30,000 soldiers in Europe — roughly half of the U.S. military force there.

More moves are expected, including a significant role for U.S. troops in a NATO plan to position battalions next year in all three Baltic countries and Poland, where the forces are intended to serve as a deterrent to any potential Russian aggression. In connection with that, a 1,000-strong Army battalion will be set up in 2017 in Poland along with a brigade headquarters.

In the Baltics, U.S. forces will continue their role in the ongoing Atlantic Resolve operation, the campaign name for the Pentagon’s effort to reassure allies and send a signal of deterrence to Russia. That means more troops, aircraft and Navy ships on patrol across the Baltic Sea in a campaign set to intensify in the year ahead.

The Army in Europe has emerged as the centerpiece for the U.S. military on the continent. In a sign of how much has changed from a few years ago, some 40 Army civilian jobs are being added at Mihail Kogalniceanu Air Base in Romania and Novo Selo in Bulgaria to enable soldiers deployed to those outposts to focus on the mission and less on administrative distractions.

Though the Navy has always dominated U.S. military operations in the Pacific region, guarding Europe has traditionally been the responsibility of the Army.

That new strength, however, comes mainly from overseas contingency funding, which means the Army depends on Congress annually recommitting to the mission.

The decision on whether to keep a bulked-up U.S. force in Europe in the years ahead could hinge on how the next president views Russia and its president, Vladimir Putin.

“I think the fact of the matter is this isn’t going to be a short-term situation with Putin. He isn’t going anywhere anytime soon,” said Lawrence Korb, a former Pentagon undersecretary of manpower and analyst of military spending. “I would expect this to continue for five years.”