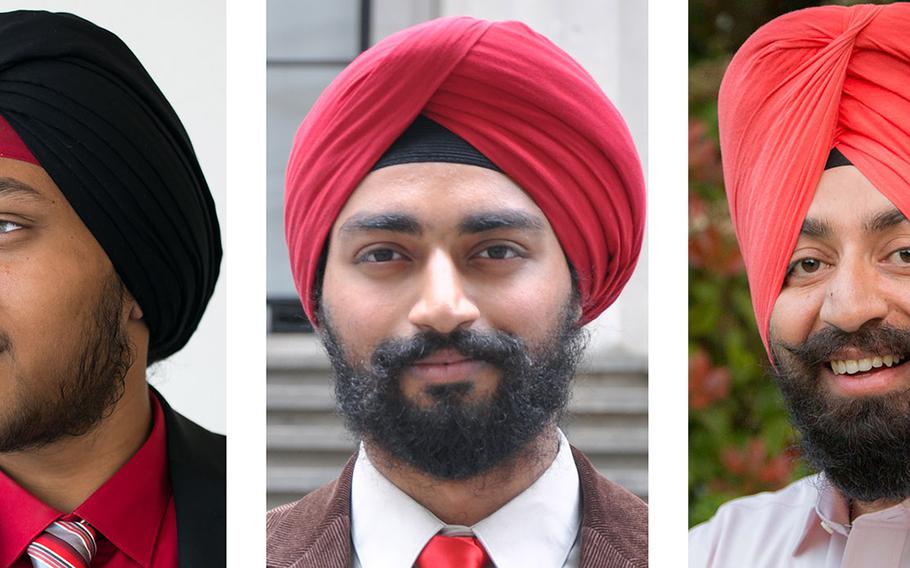 WASHINGTON — Three Sikh enlistees will be allowed to wear the uncut beards and hair and turbans that their religion requires when they report to Army basic training next month, the Army decided Friday.

Spcs. Kanwar Singh and Harpal Singh and Pvt. Arjan Singh Ghotra were granted their requested long-term religious exemptions to Army appearance standards by Debra S. Wada, assistant secretary of the Army for manpower and reserve affairs. The accommodations allow the soldiers — who will serve in Army National Guard or Reserve units — to maintain the tenets of their faith while serving in uniform under conditions set by Wada.

The conditions match those Wada set a week earlier when she granted Sikh Army Capt. Simratpal Singh, a Ranger-qualified engineering officer and Operation Enduring Freedom veteran, a similar accommodation. Singh was the first active-duty Sikh soldier to be granted a long-term appearance exemption since the Defense Department in 1981 imposed strict regulations banning long hair and beards -- effectively barring Sikhs from serving. In 2014, the Pentagon amended that policy, specifying that religious-based appearance accommodations should be granted unless the military demonstrated compelling reasons to deny them.

Thousands of such accommodations have been granted on a case-by-case basis to troops of several faiths.

In memos sent to each of the Sikh enlistees, Wada mandated that they wear their beards and hair in “a neat and conservative manner that presents a well-groomed appearance.” She set limits on the length their beards can appear when rolled and tied, and required them to wear black or camouflage-pattern turbans in uniform unless their assignments require a helmet. They will be allowed to wear “under turbans” beneath their helmets.

Wada, as she did when she granted Simratpal Singh’s accommodation, expressed concern about the effectiveness of the Army Combat Helmet and gas masks with the soldiers’ long hair and beards. Simratpal Singh has said he recently passed various tests — including a tear gas chamber test — with his beard, long hair and turban.

Attorneys for the three enlistees in late March filed a lawsuit against the Army, Defense Department and senior defense leaders demanding the recruits be granted the religious exemptions before they reported to Basic Combat Training. Despite the Army granting their clients’ religious accommodations, lawyers for the trio said they will move forward with their federal suit in an effort to make the exemptions permanent for Sikh soldiers who plan to serve in the U.S. military.

In a statement, Harsimran Kaur, legal director of the Sikh Coalition, which represents all four of the Sikh soldiers granted recent accommodations, noted that the Army plans to revisit the exemptions in about a year, and the service could rescind them at any time.

“We commend the U.S. Department of Defense for its decision to allow these soldiers to serve with their religious turbans and beards,” Kaur said. “However we know, the federal court knows, and even our nation’s largest employer, the DoD, knows that engaging in case-by-case, burdensome accommodation processes while enforcing a discriminatory ban is illegal and indefensible.”

Kanwar Singh, 26, is completing a master’s programs at the University of Massachusetts and Harvard University, according to the coalition. The native of India became an American citizen in 2014 and enlisted in the Massachusetts Army National Guard in August after he was told he could not earn a commission through ROTC because of his beard, hair and turban.

Harpal Singh, 34, is also an Indian native who is an expert in electrical and electronic engineering and has worked to build communication networks in Africa, Russia and the Middle East, according to the coalition. He enlisted in November into the Army Reserve after he was recruited for his language and cultural skills through the Military Accessions Vital to the National Interest program.

Arjan Singh Ghotra, 17, enlisted as an infantryman in the Virginia National Guard in December, according to the coalition. Ghotra was born in Virginia and will attend George Mason University after graduating from high school in May.

“After months of waiting, I’m ecstatic that I can finally serve both God and country,” Ghotra said in a statement. “I will be forever grateful to the Army for at least letting me go to boot camp. I look forward to proving that I can serve as well as anyone and am hopeful the Army will extend my accommodation afterward.”