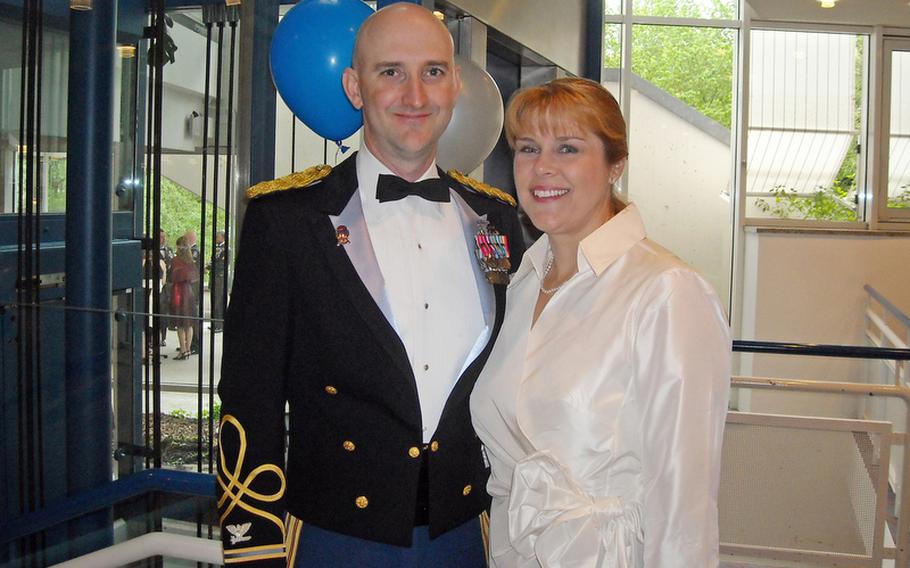 HEIDELBERG, Germany &mdash; Taking command of the lauded 173rd Airborne Brigade Combat Team in 2008 seemed like the latest stop in Col. James H. Johnson III&rsquo;s rise to the top. The son of a retired lieutenant general, Johnson was expected by many to someday wear stars himself.

But now, in a spectacular fall from grace, the honor graduate of the U.S. Military Academy at West Point is headed to court-martial next week in Kaiserslautern. He is charged with six violations of the Uniform Code of Military Justice and 27 specifications or counts, including bigamy, adultery, fraud, forgery and making false statements, all in connection with an illicit affair he conducted with an Iraqi woman.

He is also charged with wrongful cohabitation, failure to obey an order and conduct unbecoming an officer, according to the charge sheet. A previous administrative investigation found that he&rsquo;d neglected his command to further his love affair with the Iraqi woman whom he&rsquo;d met on deployment, according to an Army 15-6 investigation, the administrative precursor to the criminal case against him.

Johnson, 48, has pleaded not guilty.

If the charges are proven true, the case will represent not only the damage caused by an extra-marital affair, but also the hubris of a high-ranking officer whose abuses of power long went unchecked by the Army &mdash; until the colonel&rsquo;s wife of more than 20 years turned him in.

&ldquo;I&rsquo;m not comfortable commenting on his guilt or innocence,&rdquo; said Eugene Fidell, a leading military legal scholar who teaches at Yale University. &ldquo;But it does seem that the system of internal checks and balances may not have functioned as designed.&rdquo;

&ldquo;It is always a nasty surprise when a senior officer is put on trial,&rdquo; Fidell added, &ldquo;but it&rsquo;s unfortunately not unheard of.&rdquo;

Johnson was fired from command in March 2011 after the 15-6 investigation, which found he&rsquo;d misused a variety of government resources, apparently to woo an Iraqi woman and provide aid to her family, whom he&rsquo;d met in northern Iraq as a battalion commander on a 2005 deployment.

The father, a Kurdish math teacher, had warned Johnson&rsquo;s battalion of attacks, according to an Army report. By 2008, the family had relocated as refugees to the Netherlands, the same year Johnson took command of the 173rd.

For the two years following the Iraqi family&rsquo;s move to Europe, authorities allege in Johnson&rsquo;s charge sheet, he would visit repeatedly and take trips &mdash; to Jordan, France, Belgium, Germany and Iraq &mdash; falsifying receipts and vouchers for government reimbursement and misusing his government credit card.

He falsely claimed that the woman and her father had secret clearances, the charge sheet said; gave them a government cell phone on which charges of more than $80,000 accrued; and misappropriated tens of thousands of dollars on a &ldquo;cultural adviser&rdquo; contract for the woman&rsquo;s father.

For example, one specification alleges that in April, 2010, Johnson submitted an invoice for $59,500 to pay the woman&rsquo;s father, Alladin Muhammed Abdullah Al-Atar, at Forward Operating Base Shank, Afghanistan, where the 173rd had deployed in 2009. But the claim was &ldquo;false and fraudulent,&rdquo; the charge sheet says, &ldquo;in that the deliverables were not produced nor received as required by the contract, and was then known by the said Colonel James H. Johnson to be false and fraudulent.&rdquo;

Authorities charge that Johnson engaged in adultery on a November 2009 trip to Iraq with the woman, who was at the time married to someone else.

From October, 2011 to February of this year, authorities say, Johnson wrongfully co-habitated with the Iraqi woman, and the conduct &ldquo;was to the prejudice of good order and discipline in the armed forces and of a nature to bring discredit upon the armed forces.&rdquo;

In his written rebuttal to the 15-6 investigation, Johnson said his relationship with the woman, although perhaps &ldquo;unorthodox &hellip; had no effect on the command.&rdquo;

He contended his travel was legitimate, and that commanding a brigade headquartered in Italy, with battalions in Germany, required traveling, including to &ldquo;allied partner locations.&rdquo;

He did allow that some of his decisions might seem &ldquo;poor in hindsight.&rdquo;

But he said that what the investigating officer characterized as &ldquo;a deceptive and compartmentalized leadership style&rdquo; was actually &ldquo;an effort to minimize organizational effort to support me and focus that effort to support the brigade&rsquo;s mission and its paratroopers.&rdquo;

Army officials didn&rsquo;t begin investigating Johnson until his wife and mother of the couple&rsquo;s two children sent them an email in January 2011. By then, the Johnsons had both filed for divorce and she had returned to the U.S. with their teenage son. The daughter was in college.

Kris Johnson said she sent the email after learning that her husband was living with the other woman in his quarters at Vicenza, Italy.

&ldquo;I was in shock that he&rsquo;d be so blatant,&rdquo; she said in a phone interview from upstate New York. &ldquo;He was spinning out of control. I saw no one else was going to stop him.&rdquo;

&ldquo;It sounds like a vendetta,&rdquo; she said of her response to the situation. &ldquo;It&rsquo;s disconcerting to read posts and blogs that called me a shrew,&rdquo; she said. &ldquo;Certain people are saying I&rsquo;m just a woman scorned.

&ldquo;But if you have information of criminal wrongdoing, do you blow the whistle or sit on it? I&rsquo;ve spoken to folks; they&rsquo;re advised to be quiet and just get divorced. Wives are told to keep their mouths shut. Really? Just keep your mouth shut?&rdquo;

The bigamy count, a violation of Article 134, is the last on the charge sheet. It was added after Kris Johnson, following surgery in New York, discovered she had been unexpectedly discontinued from the military health insurance system.

The reason turned out to be that the colonel had enrolled another wife.

Court documents from Flathead County, Mont., show that James Houston Johnson III and Haveen All Adin Al Atar were married on Nov. 9 by double proxy. &ldquo;It currently is a valid marriage,&rdquo; said Peg Allison, the clerk of the court for Flathead County.

The marriage occurred while Johnson was under criminal investigation, after the Army had removed him from command and moved him to Heidelberg.

Kris Johnson said she and the colonel are not yet divorced.

She claimed in court papers that while he was still deployed to Afghanistan in 2010, her husband had revoked her command sponsorship and sent her packing from Italy with an Early Return of Dependents process. He claimed that, by taking their teenage son with her to New York state, she&rsquo;d violated international child custody treaties and kidnapped the boy &mdash; a claim that a New York state court denied.

&ldquo;I want to tell you honestly that I love my father, but I absolutely without any hesitation do not want to be returned to live with him in Vicenza, Italy,&rdquo; the boy told the court, according to court documents.

Kris Johnson is scheduled to appear at the court-martial as a witness for the prosecution. Yet she faces huge financial losses if he&rsquo;s convicted and sentenced to forfeiture of all pay and allowances.

Kris Johnson would also forfeit what would have been her share of a colonel&rsquo;s retirement pay and a variety of lifelong benefits, as well as educational benefits for the couple&rsquo;s children, worth some $4 million over an average lifespan.

&ldquo;If he is convicted, it will be interesting to see what strategy the prosecution employs to try to protect the wife&rsquo;s future financial security,&rdquo; said Fidell, Yale Law School teacher. &ldquo;She may wind up being the victim twice over.&rdquo;

&ldquo;I&rsquo;m the one who brought his criminal activity to the attention of authorities, and I stand to lose everything,&rdquo; Kris Johnson said. She&rsquo;d known for some time that her husband was in some sort of relationship with Al Atar, she said, although for a while he assured her they were only friends.

She kept quiet about the relationship.

&ldquo;I knew if word got out, I knew what would happen to his career,&rdquo; she said. &ldquo;I knew he was talented and smart and how hard he had worked to get where he was.&rdquo;

She had treasured being a military officer&rsquo;s wife, she said &mdash; the entertaining, the frequent moves to new places, and especially the ability to help families with loved ones at war.

&ldquo;The Army was a great life,&rdquo; she said.