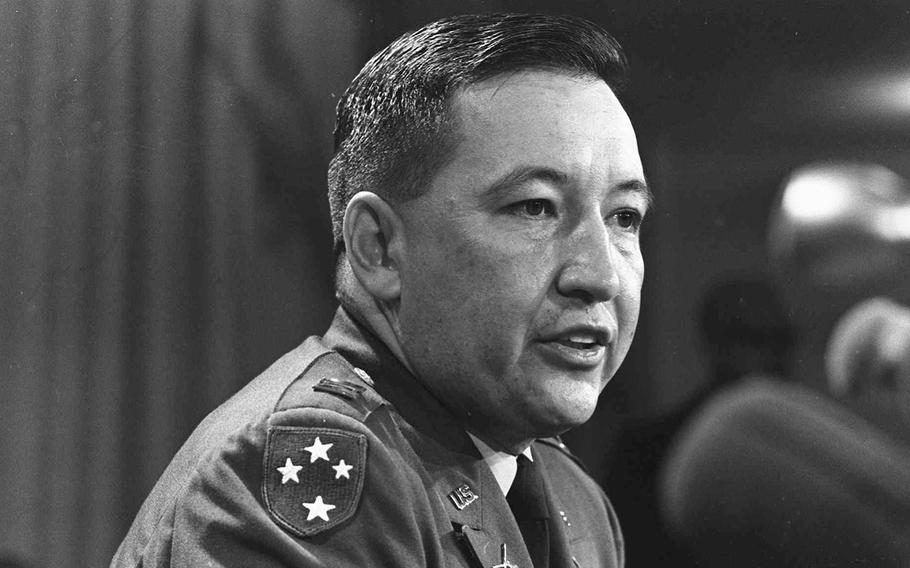 Capt. Ernest L. Medina, the company commander accused and acquitted of responsibility for killing hundreds of Vietnamese civilians in the My Lai Massacre, has died.

Medina, 81, died May 8, according to an obituary by the Thielen Funeral Home of Marinette, Wis. The cause of death was not listed.

As commander of Company C of the 1st Battalion, 20th Infantry Regiment, 11th Infantry Brigade (Light) of the 23rd (Americal) Division, Medina was one of some 30 soldiers the Army accused of participating in or covering up the murders. On the morning of March 18, 1968, Medina and the three platoons of his infantry company entered My Lai village in South Vietnam’s south central coastal region.

They had suffered losses in the past few weeks while never having engaged with the enemy and were urged to be aggressive in the village they’d been told would contain only enemy fighters.

The village in fact contained only unarmed old men, women, children and babies.

But over the next few hours, soldiers went on a rampage of murder, rape and torture, in which at least 347 civilians died, according to Army investigation records. The Vietnamese government lists 504 killed.

The mission was halted after helicopter pilot Warrant Officer Hugh Thompson and his crew intervened. Thompson and his two gunners confronted the troops, rescued a dozen villagers and reported the massacre.

But Americal Division officers reported the mission as a success against enemy fighters and buried Thompson’s report. The truth came out more than a year later after Ron Ridenhour, an enlisted soldier who’d heard from friends about the massacre, sent letters to Congress.

Historians have generally concluded that the massacre, considered the worst atrocity in modern Army history, occurred because of bad leadership, faulty battlefield intelligence, anti-Vietnamese racism and some of the counterinsurgency tactics employed by the U.S. military in the Vietnam War, such as the search-and-destroy missions that burned down entire villages.

The public learned of it after journalist Seymour Hersh got wind of the court-martial of platoon leader Lt. William Calley and interviewed him and other participants.

Calley, who claimed he was following orders, was the sole soldier convicted at court-martial — of premeditated mass murder — and subsequently served a little over three years under house arrest after initially receiving a life sentence. Calley now lives in Atlanta.

Thompson and gunner, Larry Colburn, testified at Medina’s court-martial that they watched him shoot to death an unarmed, injured woman.

Medina testified that he’d been unaware of the killings. The court-martial panel of officers acquitted him after deliberating for an hour.

Colburn told Stars and Stripes a year before his death in 2016 that he’d witnessed a general officer walk into the jury room and heard him through the open door engage in jury tampering. “He said, ‘Boy, it sure would be nice to find a way out of this for Ernie,’” Colburn said.

Medina retired from the military after his acquittal and went to work for his civilian attorney, F. Lee Bailey. He and his family settled in Marinette, where he later became president of the Rotary Club. “He was awarded the Paul Harris Award for his service to the community, an achievement of which he was very proud,” says his obituary, which makes no mention of My Lai.

Despite his acquittal, Medina’s name has become attached to a statute holding that military officers have “command responsibility” for atrocities committed by their troops. The law, called the Medina standard, states that U.S. officers who knew or should have known about atrocities and failed to prevent or stop them can be criminally prosecuted.

In an interview with The Associated Press in 1988, Medina called the My Lai killings a “horrendous thing.”

“I have regrets for it, but I have no guilt over it because I didn’t cause it,” he said.

In the weeks before My Lai, Medina rescued survivors of Calley’s platoon after they wandered into a minefield, according to the New York Times. Medina was later awarded a Silver Star for his actions.

Medina is survived by his wife, a daughter, two sons and eight grandchildren.