Ansbach, Rota may be early favorites to meet again 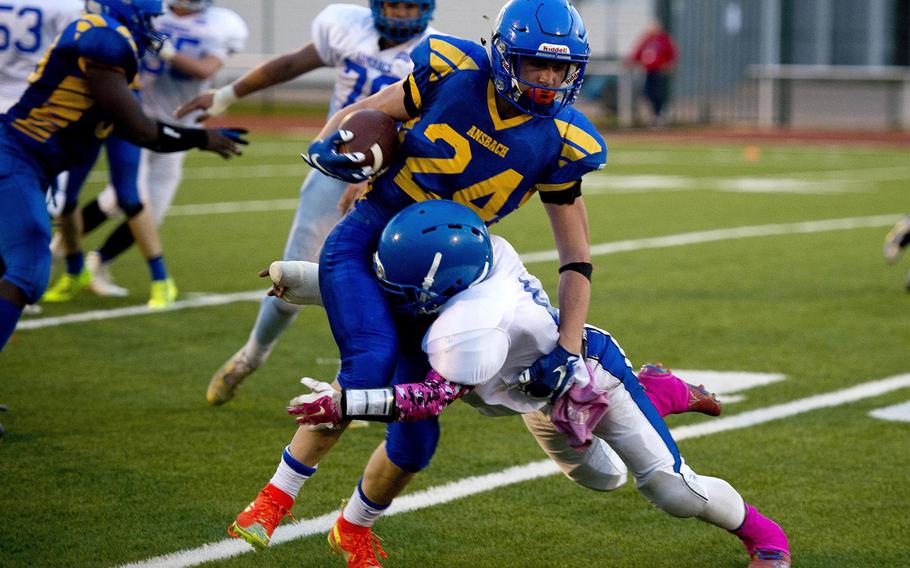 The Ansbach Cougars and the Rota Admirals hope to make a return trip to the DODEA-Europe Division II football championships when the 2016 high school football season get under way this weekend. (Michael B. Keller/Stars and Stripes)

The pieces are being moved around the chessboard of DODEA-Europe Division II football. But it might not have much effect on the endgame.

The two-time defending champion Ansbach Cougars and fast-rising runner-up Rota Admirals are the preseason favorites to meet again for the European championship Nov. 5, the culmination of a 2016 DODEA-Europe Division II regular season set to start Saturday with a slate of five games.

While the Cougars and Admirals are well-established as frontrunners, they preside over a field that has changed a bit since last year. Alconbury, one of a dozen Division II entries a year ago, won’t have a team this fall, leaving 11 teams in play for 2016. That prompted a realignment from last year’s arrangement, which featured three regional brackets of four teams apiece, to a streamlined two-region setup this season.

Ansbach shifts from North to South, where it will be joined by Bavarian rival Hohenfels and the division’s trio of Italian programs: Aviano, Naples and Vicenza.

Rota, which went undefeated in winning the Central Region last fall, now headlines the North. The Admirals line up against AFNORTH/Brussels, Baumholder, Bitburg, International School of Brussels and SHAPE.

As of publication time, DODEA-Europe Athletic Director Karen Seadore said a final decision had not yet been made about how the division’s eight playoff teams will be determined. Options include the points system utilized last year, which rewarded both wins and quality of opposition, or a more straightforward approach based strictly on regional win-loss records.

However they’re determined, the top four teams from each region will advance to the quarterfinal round the weekend of Oct. 22, where the top seed from one region will play the fourth seed from the other, and so on.

Here’s a look at how those regional races might play out.

North Rota inherits Ansbach’s spot as presumed kings in the North, and with it an arguably less arduous regional slate. Among the Admirals’ five regional opponents this year, only Bitburg posted a winning regional record in 2015.

The Admirals, having completed their transformation from winless also-ran to divisional elite with the title-game berth last year, are again loaded with size and skill. Quarterback Sam Gallardo has numerous weapons at his disposal, from senior wideout Jake Anderson to explosive running back Marc Magwood to big-time target Andy Drake at tight end, and coach Ken Walter should maximize their impact in a dangerous spread offense.

But Rota’s coronation isn’t guaranteed. The loss of game-breaking talent D’Angelo Gallardo will sting, and the Admirals return just nine players among a roster of two dozen.

That presents an opportunity for ever-steady Bitburg to return to glory. The former dynasty has played the fall guy for ascendant European powers Hohenfels and Rota in recent years, but coach Mike Laue still annually fields a hard-nosed, no-nonsense contender that could win it all with a few favorable bounces.

Incumbent playoff teams SHAPE and International School of Brussels have solid collections of talent and have a strong chance of joining the Admirals and Barons in the postseason. Baumholder, in the throes of a two-season losing streak, and AFNORTH/Brussels, entering year two of the merger that saved both programs from obsolescence, will seek to climb out of the Division II basement.

South It’s a high-impact game of musical chairs in this five-team region, where only one squad will be denied a spot in the postseason.

That’s unlikely to be two-time reigning champion Ansbach. The Cougars are poised to continue their winning ways even after the exit of stalwart head coach Marcus George, DODEA-Europe’s all-time winningest football coach. Longtime assistant Stephen Choate steps into the big job with promises to continue the Cougars’ signature brand of championship-level football.

Even as Ansbach’s school population continues to shrink, the Cougars will take the field with a healthy roster featuring 16 returning players from last year’s title squad. Among them is versatile senior Yadiel Rodriguez, two-way strongman Joxua Baughman and gifted sophomore Ogden Andrew.

Hohenfels is an established contender, winning the 2013 European title, losing the title game a year later and reaching the semifinals a year ago. But the Tigers’ roster is packed with unproven freshmen.

Meanwhile, the three teams from Italy have some work to do to gain separation. Naples, once a reliable playoff participant, slipped markedly in a winless 2015. Aviano and Vicenza both have inexperienced rosters that will need to develop quickly to give those teams a chance at a playoff run.