An instant to pull the trigger, and a lifetime to live with it 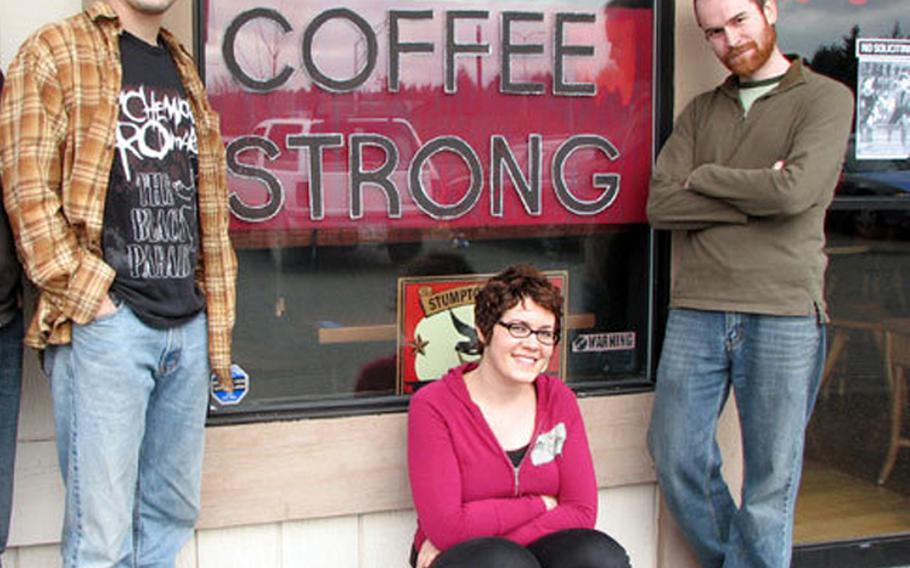 Seth Manzel, left, stands in front of his coffee shop in Tacoma, Wash. The business caters to Afghanistan and Iraq war veterans. To Manzel&#39;s right are Sarah Lazare, who runs a Web site Courage to Resist, and another Coffee Strong worker Michael William. (Photo courtesy of Seth Manzel)

Seth Manzel, left, stands in front of his coffee shop in Tacoma, Wash. The business caters to Afghanistan and Iraq war veterans. To Manzel&#39;s right are Sarah Lazare, who runs a Web site Courage to Resist, and another Coffee Strong worker Michael William. (Photo courtesy of Seth Manzel) 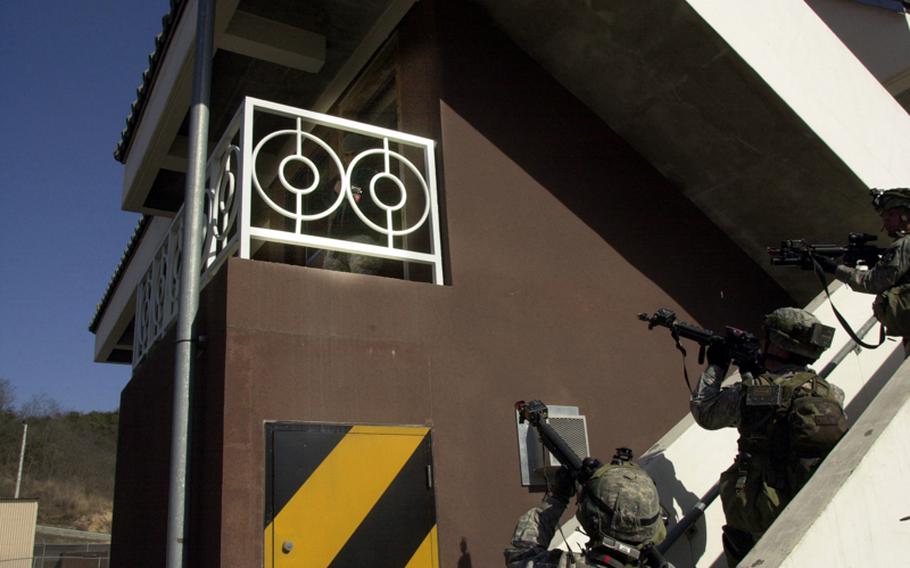 Buy Photo
U.S. soldiers in South Korea fire blank rounds at a soldier playing an Iraqi insurgent during a 2008 exercise at Rodriguez Range's urban training ground. In recent years, the military has trained troops to reinforce killing as a reflexive behavior. Bull's-eyes were replaced with targets that had human faces and bodies; the targets dropped when hit. This exercise added even more realism. (Erik Slavin/Stars and Stripes) 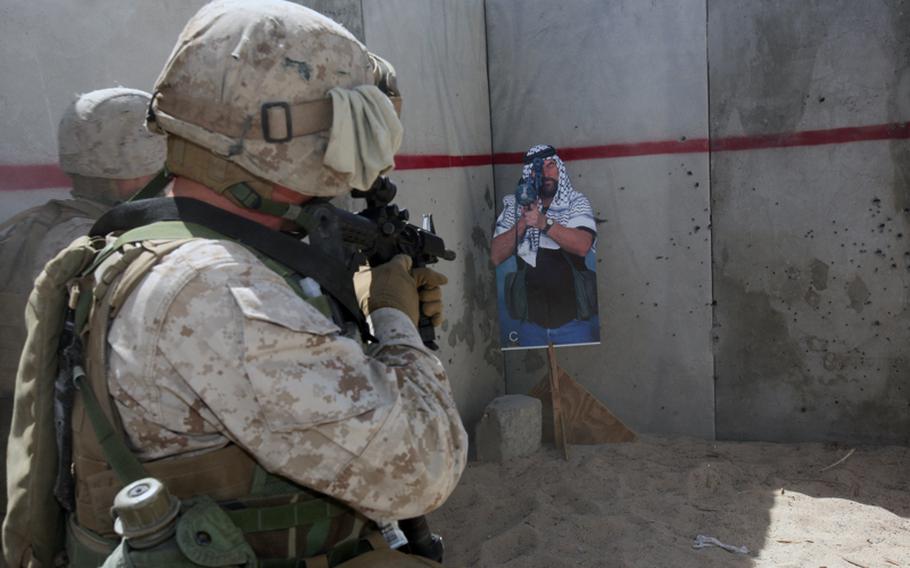 A U.S. Marine assigned to Company C, 1st Tank Battalion aims his M-4 carbine at a practice target during basic close-quarters combat training at the Marine Corps Air Ground Combat Center in California in April 2009. In recent years, the military has trained troops to reinforce killing as a reflexive behavior. Bull's-eyes were replaced with targets that had human faces and bodies. (Coutesy of Kelsey J. Green) 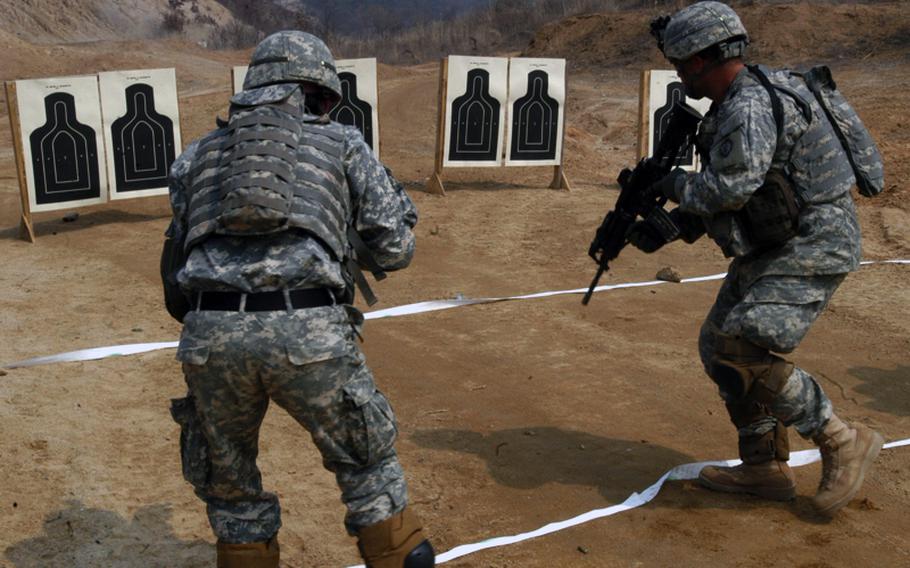 Buy Photo
Soldiers with the Hawaii-based 1st Battalion, 27th Infantry Regiment, 25th Infantry Division advance on targets during a live-fire exercise in 2007 at Rodriguez Range in South Korea. In more recent years, the military has trained troops to reinforce killing as a reflexive behavior. Bull's-eyes were replaced with targets that had human faces and bodies. (T.D. Flack/Stars and Stripes) 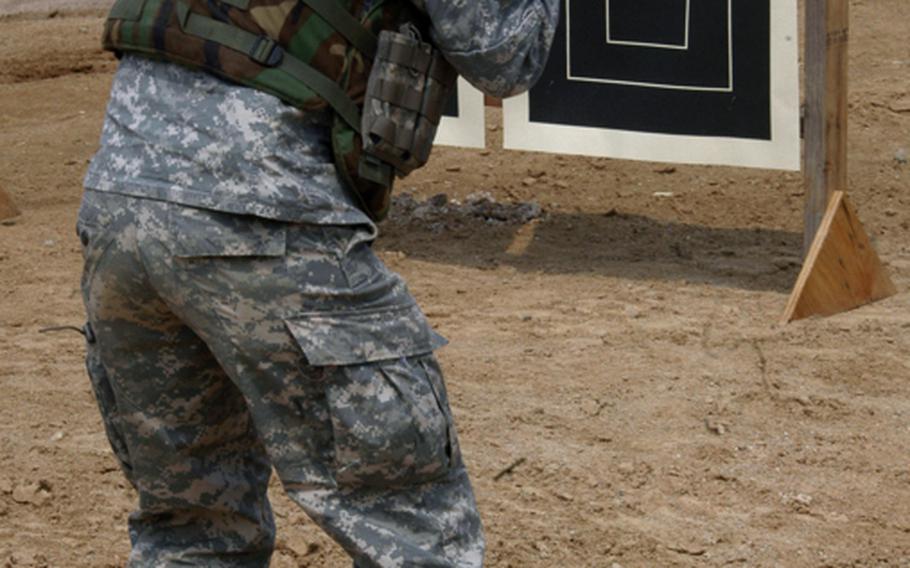 Buy Photo
A soldier with the Hawaii-based 1st Battalion, 27th Infantry Regiment, 25th Infantry Division advance on targets during a live-fire exercise at Rodriguez Range in 2007. In more recent years, the military has trained troops to reinforce killing as a reflexive behavior. Bull's-eyes were replaced with targets that had human faces and bodies. (T.D. Flack/Stars and Stripes)

Seth Manzel&rsquo;s voice was staccato as he described the killing he did during his yearlong deployment in Iraq.

He was securing a burnt-out police station outside Tal Afar.

&ldquo;I killed someone who had been on a rooftop with an AK,&rdquo; he said. &ldquo;When I saw him it was fear and elation at the same time. This is what you train to do in the military. After it was like, &lsquo;OK, next target.&rsquo;&rdquo;

Yet upon returning to Tacoma, Wash., in 2005, Manzel was driving with his wife when a car made an abrupt U-turn near him. Certain it was the start of an ambush, he grabbed his pistol and waved it at the oncoming driver.

About a year later, he was diagnosed with post-traumatic stress disorder, and now, five years after ending his career as a vehicle commander with the Army infantry, Manzel still can&rsquo;t sleep and goes tense when he hears loud noises &mdash; a hypervigilance typically associated with PTSD.

Manzel now runs a coffee shop that caters to vets of the wars in Iraq and Afghanistan outside the gates of Joint Base Lewis-McChord. A board member of the organization Iraq Veterans Against the War, Manzel said veterans gather at Coffee Strong to talk about their experiences. A counselor with military experience is even on call.

&ldquo;Nobody wants to hear what you did over there,&rdquo; he said. &ldquo;People say thank you in a superficial way. But the nuts and bolts are ugly and sometimes deplorable.&rdquo;

Manzel, 30, doesn&rsquo;t think killing affected him any more than hearing the thud of mortars at night, or watching an Iraqi boy die on a soccer field, shot accidentally by other soldiers.

But with suicides surging in the past five years and more troops being diagnosed with PTSD, some researchers, struggling to discern the root causes of the disorder, have focused on its relationship to killing. They wonder whether PTSD is exacerbated by the ever-improving conditioning to kill, or the shame and guilt associated with having killed.

&ldquo;There is an instinctual repulsion to killing one of our own kind,&rdquo; said Dr. Daphne Brown, chief of behavioral health for Landstuhl Regional Medical Center in Germany. &ldquo;When you are trained and required to overcome that, not everyone is going to be able to do that unscathed.&rdquo;

Killing and PTSDDuring nine years of war in Iraq and Afghanistan, where front lines are indistinct and fighting occurs on narrow city streets and in small villages, many U.S. troops have killed at close range. And new research shows that killing at any distance may increase the risk of developing PTSD.

A recent study in the Journal of Traumatic Stress found that Iraq war veterans who had killed, or believe they had, were at greater risk for mental health issues including PTSD, depression, anger, alcohol abuse and relationship strife.

Of nearly 2,800 soldiers surveyed for the study, 40 percent reported having killed or being responsible for somebody&rsquo;s death in Iraq, and about 22 percent showed symptoms of PTSD. Killing was &ldquo;a significant predictor of psychosocial functioning, including anger and relationship difficulties,&rdquo; wrote Shira Maguen, the study&rsquo;s chief investigator.

Since the Iraq war began, Maguen said, this was the first study to examine the relationship between killing and PTSD. &ldquo;We really need more studies because if we look at all the research, those that look at killing are in the minority.&rdquo;

Maguen said she hopes researchers will repeat the study to confirm its findings. She also will continue to explore killing, parsing out the decisions that go into pulling the trigger.

&ldquo;There are so many different factors that go into the decision to kill,&rdquo; she said. &ldquo;We need to really break it down to help us understand what is going to be the mental health impact.&rdquo;

'A conditioned response'In the past, military research on killing focused on how to make troops more lethal. During World War II, historian S.L.A. Marshall surprised the armed forces when he declared that fewer than 25 percent of riflemen had fired their weapons at the enemy.

Though Marshall&rsquo;s statistical analysis has since been questioned &mdash; critics say the firing rate was higher &mdash; his main conclusion that troops are reluctant to kill and must be conditioned otherwise is still generally accepted. The way to do this, Marshall advised, is to &ldquo;free the rifleman&rsquo;s mind with respect to the nature of targets.&rdquo; In other words, tamp down all thoughts that the target is a human being.

Killing also had to be enforced as a reflexive behavior, said retired Lt. Col. Dave Grossman, a psychologist and former Army Ranger who writes extensively about Marshall&rsquo;s research in his book &ldquo;On Killing: The Psychological Cost of Learning to Kill in War and Society.&rdquo;

Bull&rsquo;s-eyes were replaced with targets that had human faces and bodies; the targets dropped when hit. Troops also trained in shooting &ldquo;suppressive fire&rdquo; at trees, riverbanks and bunkers, rather than only targeting enemy fighters. By the Vietnam War, the firing rate grew to more than 90 percent.

Even now, the word &ldquo;kill&rdquo; is rarely used during basic training. Rather, troops are taught to &ldquo;attrit the enemy,&rdquo; &ldquo;engage a target&rdquo; or &ldquo;neutralize the threat,&rdquo; said Grossman. But conditioning troops to kill, without preparing them mentally for what it looks and feels like and ultimately means, can have unintended and disturbing results.

&ldquo;I can trick your body to kill,&rdquo; he said, &ldquo;But if your mind is not ready to live with it, then who is the next victim?&rdquo;

To fully prepare troops and preserve their mental health, Grossman argued, killing must be readily acknowledged as a part of war, not cloaked in euphemism. The military is starting to do this, by explicitly talking about killing in the new counterinsurgency manuals, he said.

Grossman added that the perception that everybody who kills will subsequently get PTSD is incorrect. David Riggs, executive director of the Center for Deployment Psychology in Bethesda, Md., agreed, saying that the majority of troops who kill adjust well as veterans.

But some servicemembers have difficulty forgiving themselves, and the ones who are haunted have often witnessed, or taken part in, killing noncombatants.

&ldquo;Many soldiers are going to say, &lsquo;I did what I was supposed to do,&rsquo;&rdquo; he said. &ldquo;But others are going to have questions about &lsquo;What kind of person am I? How do I fit back into society?&rsquo; I often recommend that they also work with a chaplain.&rdquo;

Rationalizing the killChaplain (Capt.) Ruston Hill has deployed twice to Afghanistan, first as Special Forces and then as a chaplain to a battalion from the 82nd Airborne Division. While troops were once simply told to persevere after firefights and shootings, the military now asks troops to talk about what they saw, smelled, even felt during such incidents in debriefing sessions that happen within 24 hours, he said.

Hill also has seen the powerful, positive effects of conditioning, and how it can also prepare troops mentally. While with the airborne battalion, Hill had only one young soldier who felt &ldquo;weird&rdquo; about shooting a man from about 75 meters away, and he was able to reconcile his feelings by talking with his family.

But conditioning does not help the soul, and when a servicemember is troubled by a killing, Hill tackles the matter as a chaplain.

&ldquo;There&rsquo;s going to be some trauma from taking the life of another human being, and there is not much that can be done about that,&rdquo; he said. &ldquo;I try to tell them that this is a fallen world and they don&rsquo;t always have the choice between good and evil. Sometimes the choice is between evil and even greater evil, and they have to make a pragmatic decision.&rdquo;

Ten Commandments aside, Hill pointed to an Old Testament filled with killing and war, and to saints who had killed in battle, but he acknowledged that the prospect of killing was something he, too, had struggled with before becoming a soldier.

&ldquo;I asked my pastor, &lsquo;How can you live a perfect life and still kill in battle?&rsquo; He responded: &lsquo;I don&rsquo;t know. I just know that you can.&rsquo;&rdquo;